Snaphots of a run around Stanley Park

Vancouver is bordered to the north by the water of Burrard Inlet, a narrow chasm of ocean leading to the Indian Arm fjord and separating the city from nearby North

Vancouver and its stunning mountains.

The entrance to this inlet is called the First Narrows and indeed, narrow it is. Spanned by the Lions Gate Bridge, a suspended link between the two shores, the aquatic gap is a perfect demonstration of the dynamics of fluids and Bernouilli’s principle. The tidal height in the Vancouver area can reach a few meters and all that water has to squeeze twice daily through the Narrows, which is does by increasing its speed.

While the northern part of the fjord is over 200 meters deep, the waters of Burrard Inlet don’t go beyond a depth of 60 meters and at the First Narrows, a mere 15 meters allows access to Canada’s largest port nested inside the inlet. 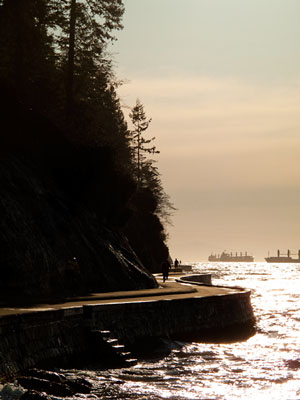 jurisdiction of Port Metro Vancouver’s – a newly formed entity regrouping many older maritime authorities – spans 600 km of shoreline, from the US border to north of the city. But Burrard Inlet remains one of the main activity centers and container ships and bulk carriers are moving in and out all the time, surrounded by the ballet of small recreational crafts and buzzed by the movements of seaplanes and helicopters.

If you have Microsoft Silverlight already or are willing to install it, here’s a link to the very interesting Port Metro Vancouver web site and its interactive real-time ship ID map, a live display of every ship’s location and data over-imposed on a satellite view of the Greater Vancouver. Check out the completely immersive full screen mode!

The southern side of the First Narrows is an outcropping of volcanic origin that resisted water erosion and formed a peninsula. It is covered by a douglas fir and cedar tree forest with an interesting – if ironic

Back in the days of colonization, it was decided to set the peninsula aside as a strategic damper zone against an American invasion and hence, the entire area was left undeveloped. Later, the newly created city acquired the forest and Stanley Park was born. The trees are mostly second generation

but quite impressive and a maze of trails slaloms under the thick temperate rain-forest canopy.

But Stanley Park, despite the beauty of the forest, is probably most famous for its promenade, the Seawall. Part of a 30 km uninterrupted, seaside walking and biking trail, Stanley Park’s section is 10 km long and circles the park from Coal Harbour to English Bay Beach. It has the most magnificent combination of city and nature views I have ever seen, even though I must admit that last month’s trail run on the flanks of Table Mountain over Cape Town was quite impressive too.

antagonists, urbania and mother nature. Your attention is drawn by a kind of anarchy, from glass covered high-rises and fancy yachts to the purest ocean views, from the bizarre sight of bright yellow sulfur mounds and Post Super Panamax gantry cranes to the softness

of snow-capped mountains, from the silent majestic flight of a bold eagle to the roaring assault of a seaplane’s turboprop engine, from waves of salt water to waves of city sounds, from the smell of many flowers to that of the cold Pacific Ocean, from the delicate arrangements of balanced stones to the chaos of an urban skyline.

And yet there is a sense of unity in the air, a binding of all those elements into one solid and beautifully integrated place, something extra that makes Stanley Park so unique. I can’t really say what, I could never

put my finger on it. But it’s unmistakable. If the universe is energy, and energy is vibration, then I would say that Stanley Park’s vibration level most closely matches our own.

Go there. Try it. You’ll know. It’s pretty hard to take a walk on the Seawall and not come back at peace and rested. That’s why I run there. I think that’s why so many others do, too.

The following are mere snapshots taken on an actual last week run. Spring is late this year and this all looks more like winter. 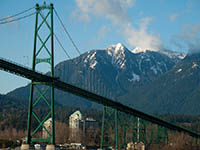