While in the Nation (sic) of Québec people are still wondering if Gilles Vigneault was right to say "Mon pays ce n’est pas un pays, c’est l’hiver", Vancouver is being given a well deserved lesson and rather stunning proof that "Mon chemin ce n’est pas un chemin, c’est la neige."

I was so wrong yesterday writing about how the few flurries we’d had would be "as bad as it gets". It has now been snowing non-stop for 36 hours. The snow, which at first was shy and melting instantly upon touching the ground, has taken control of the city and blanketed our lives with a thick white cover. Roads are a mess; snow plowers that I didn’t know we had have magically appeared and are trying to keep the streets clear.

Kids and adults alike are playing outside, simple parks have become crowded ski hills and murderous snow fights are erupting everywhere. The city has for now forgotten that it’s living under a boil water advisory in its 10th day. Christmas, this year, arrived early.

Out all day, I walk and walked and walked, ending up at the VanDusen Botanical Gardens. Gone were the colorful leafs of a too short fall season, but the place was still mesmerizing. 10 or 15 cm of fresh powdery snow were torturing the poor trees which, unaccustomed to such weight, were dropping otherwise healthy branches like as many tears of pain.

I will post more pictures as soon as I’ve processed them. For now, here’s a quick glance at Vancouver today, 26th of November, 2006. 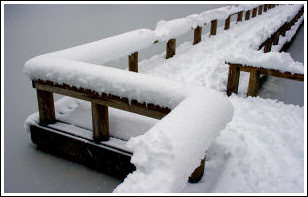 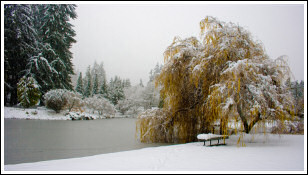 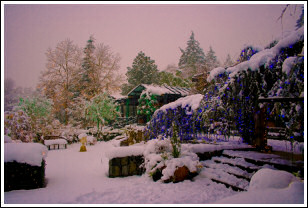 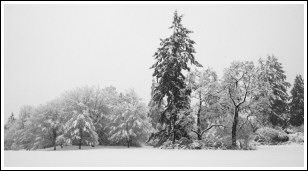 [ Written from Waves on Main, while someone with a sick sense of humor was playing Jimmy Buffet’s Margaritaville… ]