So I Could Not Afford Everest. I Climbed Table Mountain Instead. Part 1

Every morning while having breakfast in the Constantia garden, smoking cups of Illy espresso hovering around buttery

croissants, Marie and I respectfully look up just beyond the tree canopy of a luxuriant green belt at the crowning presence of Table Mountain’s eastern flank.

Whether floating into the crisp air of deep blue skies or shrouded by curious fraying low clouds that locals call their table cloth, the mountain can put on as many faces as a Shakespearean actor on stage. Summer temperatures up on the table vary wildly between the higher thirties on sunny days and the lower twenties or even ‘teens when in the clouds. The Canadian in me still just finds it hot. The Frenchy thinks it looks like Provence.

Table Mountain is an extraordinary world of its own, a fantastic playground – albeit a

potentially dangerous and remarkably challenging one. It is complex, changing, rugged, but seemingly friendly and deceptively accessible. Show the mountain, any mountain, some respect and it will treat you like an honored guest, putting forth its best manners and most beautiful views. Lack that respect and all bets are off: the giant becomes an ogre whose jaws you’ll be lucky to escape. Camouflaged as an easy urban attraction, Table Mountain is actually a tricky geographic test of one’s endurance and maturity. It is perfect for committed trail runs.

Here is the modest recount of such a run. May it inspire a need to stretch your legs or a sudden burst of laughter. After all I am by no means a true long-distance runner nor am I even yet a real trail runner. I just do my best to try new things

and challenge myself, making sure I enjoy the process. I feel absolutely no need to compete in races and the only opponent I face is the runner I was yesterday. I will win some 75% of the time.

First I would like to explain a word of mine, trunking, a cocktail of trail, running and hiking. Why? Because trail runs in places like Table Mountain feature climbs of such steep gradient that I cannot run them up and have to walk instead, keeping my 10 to 20 kilometer goal in mind and attempting to save energy. So here is the anatomy of a Table Mountain trunke:

It was early January on a southern hemisphere summer week day. I lazily got under way around 10:00 AM,

being lucky enough to have picked a day on which the table cloth had remained steadily anchored on the mountain throughout early morning, allowing for a slightly later departure. Not needing to beat the heat to the top of the run was a great perk.

Having hydrated and energized as much as comfortably possible, I geared up and tricked our dogs by leaving the house via the front door rather than the garden gate – the latter being associated with w-a-l-k-s, absolute apogee of any dog’s day. When going for a run, I always, if at all possible, spare the dogs’ feelings: they don’t understand the meaning and consequences of a vertical kilometer and don’t really care for Gatorade. They just want to chase a ball. Better let them think I am going to a sports meeting of some kind. I leave dignified. I don’t look back. I don’t apologize. I NEVER say the word ball.

Clothing-wise, I was wearing a light breathable

and moisture wicking t-shirt, my new Asics GEL-Nimbus 12 running shoes (they are not purely trail running shoes but being familiar with the run, I knew they would do just fine) and most importantly, a pair of shorts with a thousand pockets. Gu’s stashed here and there, camera pouched on the belt, map folded at the ready, I carried the specially shaped bottles in each hand but could stuff them in two large thigh pockets when needing to climb over rocks or manually steady my way somehow.

This was packing light in comparison to most hikers on the mountain but I meant to go in swiftly and strongly, in a mix of pure Alpine and more traditional Himalayan style. I carried a minimum, was committed, would move fast, touch the top and exit before having had time to think it through.

The first minutes were spent in a brisk warm up walk, off the clock. The air was cool under the clouds but my legs and cardio were going to work hard immediately since the run shoots straight up the Diep River Trail. I started slow. Of course I would boldly pick up the pace when passing casual walkers and their casual dogs, ego lit up like a

lighthouse, but the sprint could only make me look good if of short duration so I timed myself to slow back to a crawling ascent at the first bend in the trail.

I was running up a lush, almost tropical-looking stretch of vegetation that stubbornly follows a small mountain-born river through the suburbs. Encountering such a gradient in the wild I would probably have walked up, but familiar with the area, I knew how to pace and thus managed to reach the Cecilia Plantation in 12 minutes. There I left civilization behind and turned left, temporarily veering away from my summit goal to reach the Constantia Nek, main southeastern gateway to the mountain.

This is where I indulged in the first walk up, a short but surprisingly steep section of dirt road leading to a traverse to the Nek. I still made the Nek in good time and launched into another steep walking climb up a staircase to the “jeep track”, a section of the Peninsula-wide Hoerikwaggo

Hiking Trail called Clayton’s Road that would lead me deep into the table. At the top of the stairs, I turned around and took a deep breath, both to catch said breath and to appreciate how the scenery had already widened and, trees having remained far below, the view improved tremendously. I glanced at my watch; 30 minutes had elapsed, I had gained 300 meters in elevation.

Coming upon a group of boys and girls sitting in the middle of the drivable track itself, obviously having an argument about varying ratios of stamina vs testosterone, I launched into an easy upward run – pacing myself because the Jeep track is long and strenuous – and probably nailed the weakest teenager’s coffin. I ignored their unbelieving gaze and pushed on steadily. One man’s confidence is often built upon the crushing of others’.

The track was actually paved, or rather cemented, and allowed for a good grip despite the angle.
Negotiating the track while rising steadily and swiftly above Constantia took another 30 minutes. The entire top section was again too steep to run and forced me to lean heavily into the slope. It was 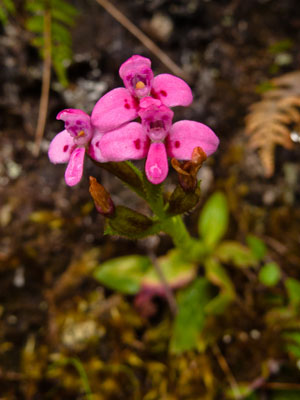 interesting imagining a 4×4 vehicle driving up here. I passed the last human beings I would see for hours, a father and son. They were going down.

The wind had picked up substantially by now and chilly drafts made me wonder if my soaking wet t-shirt would suffice higher up. But I had planned the run carefully and allowed for two escape routes, down the successive narrow crevices of Nursery Ravine and Skeleton Gorge. Should the weather turn even nastier, I would just tumble down one of them back to warmer temperatures and suburban trails.

There was a 4×4 parked by the overseer’s cottage but no one in sight. In grand Franco-Canadian disdain, I ignored the brown, tannin-tinted but otherwise safe drinking water source located there and decided to rely on my commercially colored, electrolyte-enriched, energy-packed expensive Powerade to support me to the top and back. If Marie had been with me, she would have frowned. She can’t understand how one could prefer that crap to perfectly good spring water. She has a point. But brown is brown and my vivid imagination prevailed. It had been an hour since I started. I sucked on a gel and washed it down with a few sips of synthetic-blue liquid.

Soon after the cottage the Jeep track let me down as it turned into the plateau towards the main reservoirs. I picked up the hiking

trail leading to the summit. I would now have to watch my steps – this path was uneven at best and would sometimes require me to scramble up on all four.

The cloud ceiling was getting closer and while it seemed to be lifting slowly, I doubted that would happen before I poked my head into the mist. But the temperature had not dropped unacceptably and navigating in the blind wouldn’t be a problem – this was an easy trail to follow, I had done it before and carried the redundant map and GPS as back-up.

Alternating a few walks up steep or very rocky sections with runs on reasonable inclines and all other terrain, I looked around briefly between steps. There were flowers everywhere. No one in sight. The mountain was mine. “Hello,” she said, “I was expecting you. Welcome. Be careful. Enjoy.”