So I could not Afford Everest. I Climbed Table Mountain Instead. Part 2

Reaching my first escape route, Nursery Ravine – a long, vertical set of stairs into the top of Kirstenbosch Botanical Garden – I did a quick mental recap; lots of liquid remained, maybe 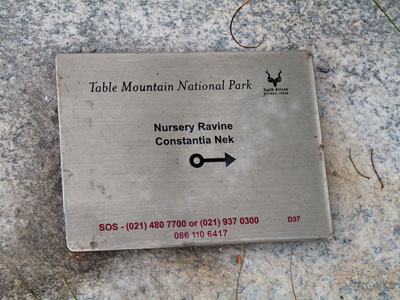 too much. The legs were in good shape, knees defiantly steady. Spirit was strong. Time was good. I pushed on.

The rugged trail climbed over another ridge and then descended into a deep chasm. Second escape route, Skeleton Gorge. This one was equipped with ladders and also led down to Kirstenbosch. I could almost touch the clouds now and moisture in the air formed small droplets on the watch. The brim of my hat was dripping with a mixture of condensation, sweat and cloud water. I could feel myself cooling off fast when I slowed to a walk but as long as running, body temperature stayed ideal.

Around 110 minutes into the run, I reached a rocky terrace I refer to as “the Balcony” in affectionate reference to Mount Everest’s feature of the same name – a sharp, exposed, aerial edge high on the Himalayan mountain between Camp 4 and the Summit Ridge.

Just above my the local terrace was the 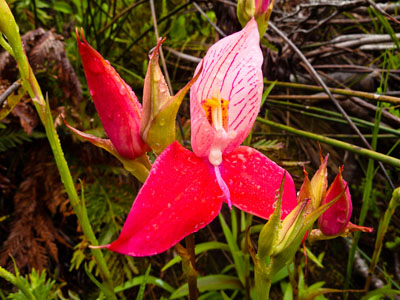 old Aqueduct. It was time for a small detour as this was where one of the mountain’s shyest flower gems hides, Disa uniflora. I plunged into thick vegetation, fol­lowing a hidden path towards a reward most would simply ignore. The beautiful red disas were barely beginning to bloom and many more would open in the coming days but I snapped a few pictures for the record.

This 10-minute stop had let me cool off a bit too much; I rejoined the trail feeling rather wet and chilly and started running up again. I soon entered the clouds. From here on, visibility was limited to a stone’s throw at most and I would rely on memory – and the absence of conflicting diverging trails – to reach my destination.

The wind began to gust near the invisible edge of cliffs but most of the path lay far enough into the table itself that I managed to stay warm. 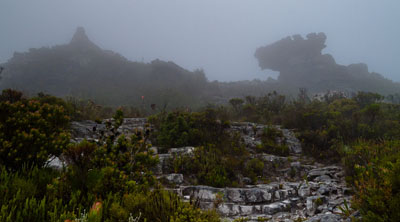 I trod lightly running on a few wooden boardwalks built over precious fynbos, hoping not to fall through. An injury this high up on the mountain would have turned the fun into great misery.

Next appeared the “Hillary Step” – another theft from Everest topography, a short scramble up a thin crack in a boulder. I wiggled my way up, bottles locked away in pockets and scrapping against the granite, and then I was on the “Summit Ridge”. Nothing more remained between me and the beacon than a few minutes of running on an almost flat, sandy path through the mist.

Soon a metal marker plate with a map emerged from the clouds. I looked to my left and there stood Maclear’s Beacon, a tall, carefully erected pile of stones, 1087 meters above sea level. The visibility was still zero. I snapped a few grinning self-portraits, laughing with loud satisfaction, but already the mist seemed to be warning me in hushed 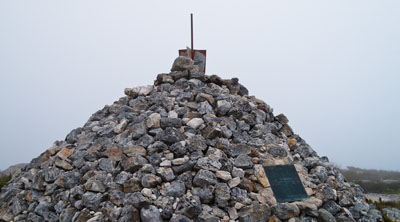 tones: “Hurry up, don’t delay, you’ll cool off, you’ll get lost up here, the mountain will keep you, hurry, focus.”

The Forerunner marked two hours and ten minutes, including the Aqueduct stop. I cracked the lid off the second Powerade bottle. The empty one, along with used gel packages, was safely tucked in my shorts and carried off the mountain. Take nothing but pictures, the old diving days reminded me, leave nothing but footprints.

I started back down. Up on Everest, I would have been facing a strenuous climb down, low on oxygen and short on time, the night closing in rapidly and the cold getting stiffer. Here the descent would be much easier. The main impact was going to be on the knees and legs. They were tired, forcing me to watch 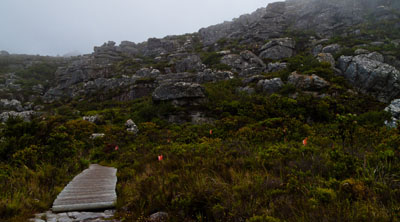 my steps more carefully then ever. A sprained ankle would have been a mini-catastrophe.

As soon as I left the summit behind, clouds began to break up and some light, along with shy heat, poured through the gaps. I had not seen a soul since the upper Jeep track. Silence was only punctuated by the wind and birds. My fast, careful steps echoed in a hypnotic rhythm as I charged down the slope.

Estimating another hour and bits to get back, I emerged into clear air, realizing once again that despite the cloth that had clung to Table Mountain most of the day, the Cape Peninsula remained mostly sunny and warm. I could see Cape Point, now, and far across False Bay.

At the top of Skeleton Gorge, I left 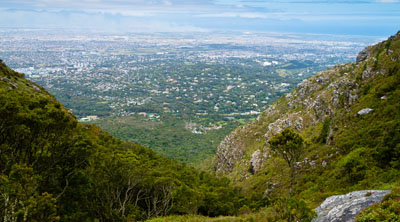 the upper trail and plunged into the ravine. The walls narrowed down around me and shade prevailed. This path was wet from water running down the slope. The ladders were negotiated a la maritime, almost like sailors glide down the steep stairs of a submarine deck, facing the void, hands on the rails, buttocks on the steps. Make way!

I stupidly reflected on how easy the run had been, probably jinxing it. At 3:00 hours, I reached the bottom of the gorge and paused to briefly look at my map. The Kirstenbosch heights are a maze of multiple trails, paths and tracks, and I wanted to get home quickly. It was now sunny and very hot. I applied sunblock to my arms, nose and ears, and decided to sit down for a minute.

That’s when it hit me. What the French call “un coup de barre“, in other words hitting the wall or bonking. The dreaded collapse. My glycogen levels must have dipped below threshold. I rested a while longer and then sighed. No running home from here,

I would barely manage to walk the 3 or 4 kilometers back to the house. I stopped GPS logging and called it a day.

Having been lucky, smart, or both, I would have arranged for a Kirstenbosch pick-up. Instead I angled down slowly through the maze, first following the Contour Path, then wide jeep tracks, to arrive just above the reservoir. I carried on, still descending through a freshly cut pine forest, crossed the road, ventured into the residential streets of Constantia, and was home some four hours after I’d left.

All gear came off and I jumped right into the swimming pool, clothing and all. The dogs looked worried. Obviously, they thought, climbing the local Mount Everest has affected him deeply. High altitude must have killed so many 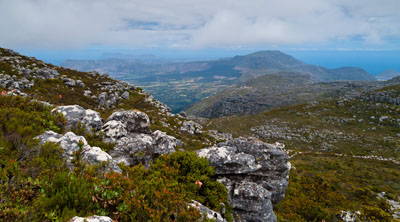 brain cells he is now trying to drown himself. If only humans knew the value of a simple ball.

Later, when I asked our corgi Maggie – she can talk – why she chases balls so obsessively, she paraphrased the late George Leigh Mallory, one of Everest’s mythical early figures, and simply mused: “Because they’re there.”

I could say the same about my runs and climbing Table Mountain. And were they not there, I would invent them. 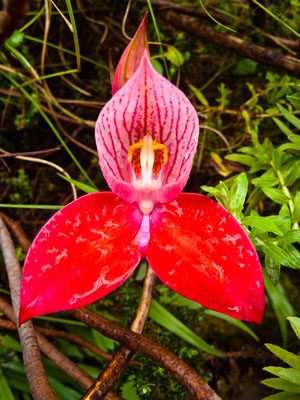 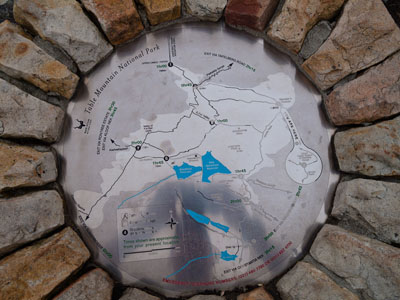