South African Townships, the Nightmare Within a Dream

In 1994, when Apartheid fell, black South Africans must have seen their hopes soar far beyond barbed-wire fences and absolute repression. Everything was suddenly possible. The world, their world, had just become a better place.

Some 15 years later, as I ventured last March into Khayelitsha, second largest township in the 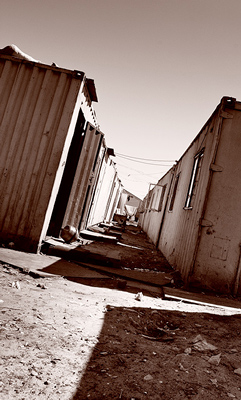 country after Soweto, I was forced to admit that if the world had become a better place, this wasn’t it. In the long, painful transition from radical racism to relative freedom, something, somehow, had gone terribly wrong.

Cape Town, jewel of the Western Cape and arguably one of the most beautiful cities in the world, is surrounded on all sides by extremely poor neighborhoods called townships. Khayelitsha was established in 1985 to deal with illegal settlement on the Cape Flats and after initially being populated by forceful relocation, it eventually became a top destination for willing settlers in search of work and education.

The numbers are quite staggering. As of 2010, an estimated 900,000 live in and around Khayelitsha. It is composed of three different kinds of dwellings, categorized as formal, informal and illegal informal. The former are also called Mandela houses; they are single-room, often brick-and-mortar, small rectangular houses built by the authorities after Mandela promised housing for the people. They usually have power and water.

Informal settlements are given a very basic lot-based water supply in the form of a toilet shack with a water tap and people are left to build their living quarters around, either in solid materials or tin sheets.

Last and least, illegal settlements appear here and there, often on public space such as highway sides and have no utilities whatsoever. If I remember correctly, the law states that they must be displaced by the authorities within 90 days or they become legal.

The very disturbing thing about townships is that, just like in our 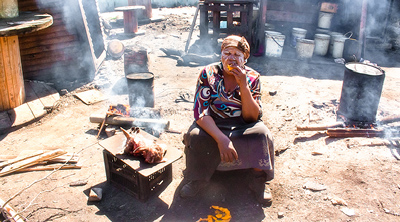 fancy First World cities even if on totally different scales, extreme poverty can be seen clashing with relative wealth. Satellite dishes abound. Electricity is either distributed officially or tapped into illegally but TV’s are part of the township’s everyday life and the outside world erupts into each house, riding on radio waves and full of unattainable glamor.

Our guide Thabang, good friend and son of Selina, one of the nicest, kindest woman I know on this silly little planet of ours, runs a small tour company, Ezizwe Travel and Tours. He has specialized in township tours, having been brought up in one himself. For hours, he drove us in and around Khayelitsha in his Volkswagen Kombi, trying to give us a sense of what life can be for 90% of the South African population.

I am not sure I got it. It was all very surreal. The daily existential reality in townships is so far remote from my own experience of life that I could at best stare and wonder. Understanding would take months if not years. Accepting, even longer.

Marie and I were also quite uncomfortable with the very reason for our presence. It wasn’t voyeurism, we had actually dreaded the visit for some time. But having never truly explored a township, we felt like our South African experience was that of ostriches, our heads firmly stuck into the sand, refusing hard to see the darkest side of things and focusing solely on a very privileged white-only way of life.

But as we cruised through the townships, stopping here and there to interact with locals under the very calculated supervision of our guide and watched as he rewarded them on the spot with small amounts of money, turning our visit into a tourism initiative and their hospitality into simple business deals, we couldn’t help but to feel embarrassed and guilty.

Despite a thorough awareness of the potential benefits of tourism for any undeveloped, poor or isolated area, I felt like the visitor of a zoo or circus. The township limits are indeed a cage, no longer restricting movement but certainly locking out opportunity. Such a cage must make for endless sadness and the likely eradication of free will, a combination likely to tame the wildest people.

We visited Vicky’s B&B, a 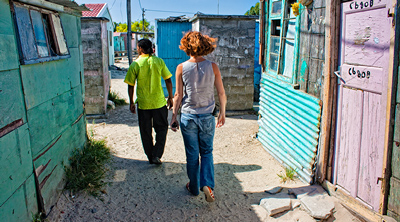 modest yet well furnished bed and breakfast, set right in the middle of the township and obviously catering to the most adventurous visitors. They had internet and a plasma TV, won in some contest and placed in the center of the common room. A girl gave us a well rehearsed speech about the premises and encouraged donations. The effort was there.

We drank locally brewed beer in a dark shack with a row of men sitting opposite us on low benches, watching us from the shadows with impenetrable gazes, as the huge beer bucket ritually got passed around the room and we were forced to take a single sip of the warm, frothy and bitter liquid than had absolutely nothing in common with the beer I know. Thabang explained that one paid R6 (under a dollar US) when first walking in and would then be allowed to return all day and drink. It cost R12 on week-ends. Marie remarked aloud that visiting on a week day was smarter. The men cracked up.

We paid a short visit to Ndaba, a Langa sangoma (or medicine man) who has setup his practice inside a container that’s become completely overtaken by hundreds of bizarre objects and potions. Marie bravely spoke to him about dreams and he dispensed his wisdom while waving a sacred switch through the air. When we left, men outside his door were trying to sell us souvenirs. One of them, sizing us up with highly trained eyes, saw my 200m Titanium Citizen Promaster dive watch and commented on it. We were back in modern times.

We watched ladies skinning, glazing and roasting sheep heads in the fierce sun, surrounded by blue smoke and the many undisclosed smells of poverty and decay

We watched ladies skinning, glazing and roasting “smileys” in the fierce sun, surrounded by blue smoke and the many undisclosed smells of poverty and decay. The smileys are discarded sheep heads obtained from local slaughterhouses for pennies and later sold at a profit, a fully cooked head costing R17.

We visited a school and interrupted a class or two, politely greeted by kids in clean uniforms. I noticed  very old computers in a corner. This was one of very few such schools. Dozens of kids attended. I have no idea what the remaining hundreds of thousands do with their days.

Marie and I both carried our cameras but were basically paralyzed. Neither one of us has much journalism training and we let our feelings and self-consciousness come before the requirements for matter-of-factly recording of our visit. The very few photos that accompany this post paint a rather incomplete picture of the townships. Some were taken earlier in the trip while driving through on the highway, much like taking pictures of the 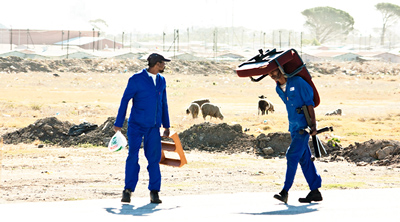 Keys from a plane and pretending to have been to Florida.

I am left with a feeling of unease, and sadness. The tour was incredibly instructive. It was terribly depressing. It probably didn’t make any difference at all. We contributed a few dollars to the work of local craftsmen, and a few more, via Thabang, to the emerging tourism scene. So much remains to be changed. So little exists now to inspire township inhabitants, to let them hope and dream of practical goals rather than of mythical ones.

Apartheid might have been defeated but it left a legacy of chaos and high crime that many equate to having changed a dollar for four quarters. The racial barriers still stand, not so much in law and politics as on economic, demographic, geographic and social levels. The vast majority of South Africa’s black and colored people remain poor and uneducated.

They are still hurting. They merely have acquired the right to do so freely. And here I stand, blogging about it.