34 degrees of latitude south. Very comfortable bottom tip of the African Continent. South of us, I was thinking today, is a maritime void that drops all the way to Antarctica. Ships rounding the Cape of Good Hope and Cape Agulhas probably do so in an affectionate fashion, keeping land in sight, wary of open seas. Nearby, they 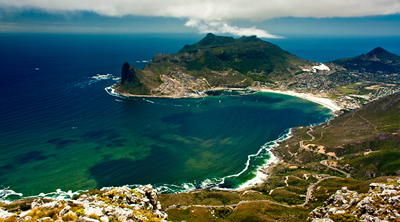 And the skies over there, where no landmass remains, are surely empty too, exempt of air traffic; why would there be any? This is a space that leads nowhere, that just doesn’t fit on known lines from A to B.

South Africa, as I believe I’ve said it before, is a strange kaleidoscope. Where else can one drive for a few hours and see baboons, sharks, seals, penguins, dassies, sheep, horses, ostriches, antelopes, zebras, chameleons and two corgis? Summer weather is stunning, moody, Mediterranean. The ocean is all around us, ever-present. Life flows in a rather languorous southern way, rocked softly by the old rhythms of nature and the new controlling attempts of man. Wearing a watch down here no longer seems so critical, as there are no subways to catch nor tails to chase. If there is light and the air is mild and perfumed, it is morning. Once the heat picks up to the point of making shade a commodity worth trading, it’s mid-day. When sunset finally casts an orange glow on Table Mountain, it’s 8:00 PM. That simple.

Our lazy days are filled with sun and the chirping of many birds, and the caress of a southeaster that makes trees sing and keeps the sky ever-changing. Breakfast coffee is sipped in clear morning air looking up at the 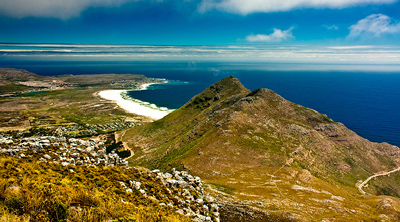 mountain, slow lunches enjoyed later in protective shade, and dinners served by candle light as stories are told of the day gone by, over platefuls of braaied boerewors and lamb chops, snoek pate, Woolworths custard, milk tarts, Malva pudding and the many delicious wines of the Western Cape.

Hints of a road trip are taking shape in our minds and being projected on maps. Echoes speak of the Great Karoo, a land of heat and flat nothingness, a return to lonely dirt roads and the solitude of the very first days. Beyond it, stuck between the Eastern Cape, the Free State and KwaZulu-Natal, lies the isolated mountain kingdom of Lesotho. Very much like the worlds of Tolkien, South Africa’s scenery changes radically as one travels along and Lesotho could easily be the Kingdom of Mordor, evil notwithstanding. Its western wall is protected by the infamous Sani Pass, highest and steepest mountain pass on the continent at 2873 meters above sea level.

For now, here are glimpses of a hike around Silvermine. A’rvi pas.