A few days ago, while strolling around Beaver Lake in Stanley Park, I felt the slight brush of a feather against my head. 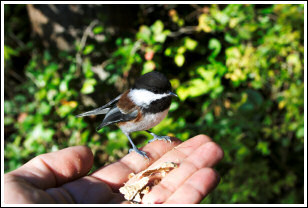 Surprised, I looked up and realized a cute little bird was dive-bombing at me. I assumed I was getting too close to his nest and to avoid worrying the little guy, I walked away. But then from another direction, another attack. That’s odd, I thought. They must all be nesting in the fall.

The crazy idea of catching a shot of one of them in flight as they were flying by me immediately took shape and I got the camera out of the bag. Not knowing how to focus on them, I opted for a manual preset to an arm’s length and hoped the birds would keep flying as close as they had. So I held up my hand away from me, arm extended, and attempted to manually focus on it – an operation that isn’t so easy with only one remaining hand.

There. I had my fingers well framed in the viewfinder and they were just about as sharp as the bird standing on them. The bird? I blinked, looked again. I wasn’t dreaming; one 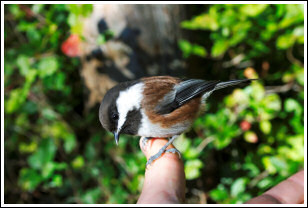 of the kamikazes had just landed on my fingers and was calmly looking at me. I looked back. We exchanged a few silent words, not to scare each other off.

– Welcome, I thought.
– Hello, he answered, where is the food?
– What food?
– The food that’s supposed to be in your hand. Why do you think I’m here, carefully perched on a human being 100 times my size?

He nibbled at the palm of my hand as if to punctuate his hunger. I snapped a shot. The shutter scared him and he flew away.

I was beginning to understand. The birds had been trained by passers-by to come and eat seeds in their hands. The fly-bys had been attempts to land on my head, probably judged – at the last second – too big and round to be seed-bearing. I looked down on the ground, found a few old seeds and some peanut shells that I immediately presented to the sky, open palm and camera at the ready.

The birds came back, taking turns, landing on my hand, nibbling, looking at me, flying away. They were cute and speedy. A lady told me they are called Chickadees. So check-a-‘dees photos! ;-) 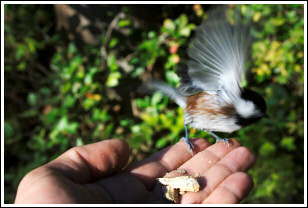 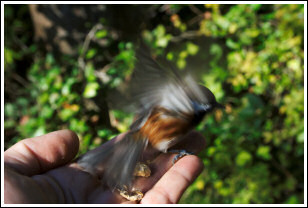 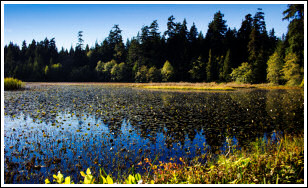