Clearly, Mother Nature hasn’t yet exhausted her fury. The first two months of this winter

season have already gone down in history, and the madness seems far from over. After November’s exceptional rain and snow, it was December’s winds that inflicted the worse wounds to our region, many of them fatal blows.

Last week, the Lower Mainland struggled through winds gusting at just under 100 km/h, leaving a quarter of a million people without electricity. In some areas, the power still hasn’t been restored and BC Hydro might be asking the GVRD population to turn their Christmas lights off, in an unprecedented attempt to lighten the load on the power grid and avoid another collapse. Somebody please tell Jimmy.

On the natural side of things, it didn’t go much better; forests were already extremely humid, trunks were soaked up with water and the soil was saturated and loose; then came the wind. As a result, the Capilano Suspension Bridge remains closed, weeks after the weight of a record snowfall crippled the trees and a large one seemingly collapsed on the bridge itself. The last assault must have made matters much worse, even though I still haven’t seen it with my own eyes. What I have seen, though, is the desolation in Stanley Park. 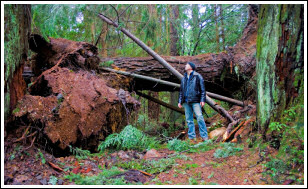 December 16th, News1130 online declared “Stanley Park is an absolute mess after the windstorm. The Vancouver Park Board has stopped short of calling it a disaster but has closed the park because of the danger to the public, mostly from hundreds, if not thousands, of fallen trees.” And the truth is, Stanley Park has been scarred for many, many years to come.

It’s by taking a short walk into Stanley Park that one best appreciates the extent of the damage. Of course, the official advice is for people to stay out of the park until it’s safe to return and clearing is progressing well. I was, however, bound by my duties as a photographer and blogger and decided to take a quick walk into the park. A really quick one.

Days after the wind storm, crews are still working hard to clear the fallen trees from main roads and paths, but as I ventured deeper into the forest, I was faced with an inextricable maze of uprooted trees and snapped branches. What used to be a clean, well maintained network of trails has become an unrecognizable mesh of random obstructions. The Vancouver Park Board has admitted looking into letting commercial loggers in 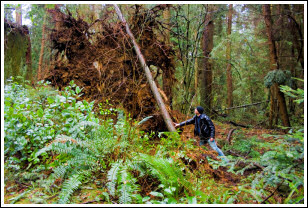 the park to help clear the logs, a scary thought if I ever heard one. Either way, the clean up will take months.

Once again, we are faced with a humbling and saddening reality: it took one single night to destroy what had taken decades if not hundreds of years to grow. The giants lying in agony on their side, defeated and bleeding to death as life slowly seeps away from them, seem to be begging for a “coup de grace”. They will, however, remain there for many generations to come – generations of trees, and of men too, who will be reminded every time they explore the park of the unforgiving power of nature.

And then, as I was waiting for my bus by Lost Lagoon, watching swans and ducks on the pond, not one but two pairs of Bald Eagles came flying low, at tree-top height, obviously unaware that a mere 300 meters away lays the third most densely populated urban zone in North America.

Even through such suffering, Stanley Park retains its dignity and magic.