Unfortunately, it appears that every Saturday or Sunday, at about the same time we decide we should go somewhere for fun and a change of scenery, eight million New Yorkers reach the same conclusion and scramble. I’m not sure how our intentions are leaked, maybe I should check with Assange or Snowden. The bottom line is we all end up, it seems, competing for subway cars and breathable air.

Last weekend, Marie and I opted for a cross-city stampede, the whole shebang, north to south, from Harlem to the bottom of Staten Island. We packed sandwiches, heavy photo gear, sharp blades for foraging, paper bags to receive the blades’ harvest, Tabard bug repellent, hand sanitizer and sunblock.

The 3 subway took us down to Chambers where we switched to the 1, bound for the South Ferry end of line. There, the flow of travelers was splitting between the two main ferries, Governor’s and Staten Island. A good eighty percent of the crowd was touristic and clueless. The huge Staten Island Ferry terminal seemed to have heightened security and two explosive-sniffing dogs were on duty at the bottom of the escalators. A very business-like officer asked me to put my backpack down for the dog to sniff. He looked stressed and on adrenaline. Either he had no people skills or the threat was serious.

Normally regular as clockwork and departing every thirty minutes on the hour and the half-hour, the ferry was delayed by 15 minutes. When we were let on, a huge human tide pressed forward and boarded. I don’t know how many people these ferries can safely carry and how they control the passenger load. But we boarded.He looked stressed and on adrenaline. Either he had no people skills or the threat was serious.

I spent our crossing of the New York Harbor defending a minuscule share of deck surface against a tribe of Spaniards, a team of Swedes and a flock of seagulls. I had attached my GoPro to the railing with the GorillaPod and attempted a daring timelapse of our sailing, but the boat’s vibrations, just as Marie had predicted, proved to be a bit much for a steady shot.

We caught the Staten Island Railway – a glorified open-air subway, its cars tired and covered in graffiti – with time to spare, and were on our way south. Getting off as we most always do at Richmond, we were the only people to exit or board the train, an amazingly rare event on any New York City subway or train platform on a summer Saturday.

I adjusted my photo backpack’s straps and we walked a quarter of a mile along the road to the trail head. Entering the North Mt Loretto State Forest from the very top, we stumbled upon a patch of strange wax-looking mushrooms growing on a log. Marie ID’ed them as edible and rare. “We must come back this way”, she said expectantly. “We will”, I answered. I took comfort in the knowledge that there would be much back-and-forth on Facebook foraging groups and other mycologically-minded places to confirm our find. 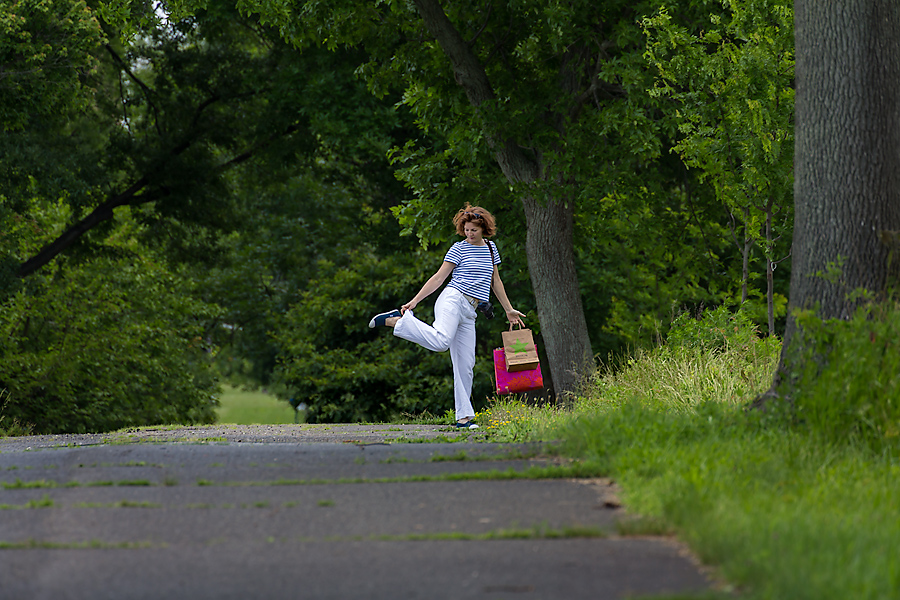 The forest was crossed quickly and tempting trails were avoided because of the combined threat of ticks and mosquitoes, the former theoretical but the latter very real, winged vampires storming us as soon as we ventured into the deeper woods. We were wearing short sleeves and had come for the park’s open spaces that lay below the road.

Wild rabbits were shy this time around, but one went into stealth mode to tease unseeing Marie. No snakes, and a single Osprey spotted. But the goal had been summer greens and we found a beautiful new patch, to which Marie paid a close visit while a groundhog peered at us from the relative shelter of tall grass.

The goal had been summer greens and we found a beautiful new patchOur mission accomplished, we headed back through the forest, caught our train and arrived at the main ferry terminal some 15 minutes before the planned departure. There was once again more security on this end and two dogs, which seemed unusual even though the handlers appeared to be a little more laid back than their Manhattan counterparts. The inbound ferry arrived and began offloading passengers. Our turn should have come within minutes. But eventually, a voice came on the loudspeaker and informed us that the 5:30 ferry was delayed for mechanical reasons. It came back a little later and announced that that departure was canceled due to circumstances out of its control. I had just seen one of the dog handler rush aboard, unable to tell if the dog was with him. Two cops followed soon after him.

Marie and I looked at each other. Mechanical? We were being fed some crap story to cover for developing events and a heightened security level. Bomb threat on the ferry or simply a city-wide tightening of the urban sphincter, we’ll never know. There is no other way off Staten Island apart for an absurd taxi ride into Jersey that would last hours and cost hundreds, so we stood our ground as close to the boarding gate as possible and crossed fingers. The huge terminal was filling up and we figured not everyone would be lucky enough to board. 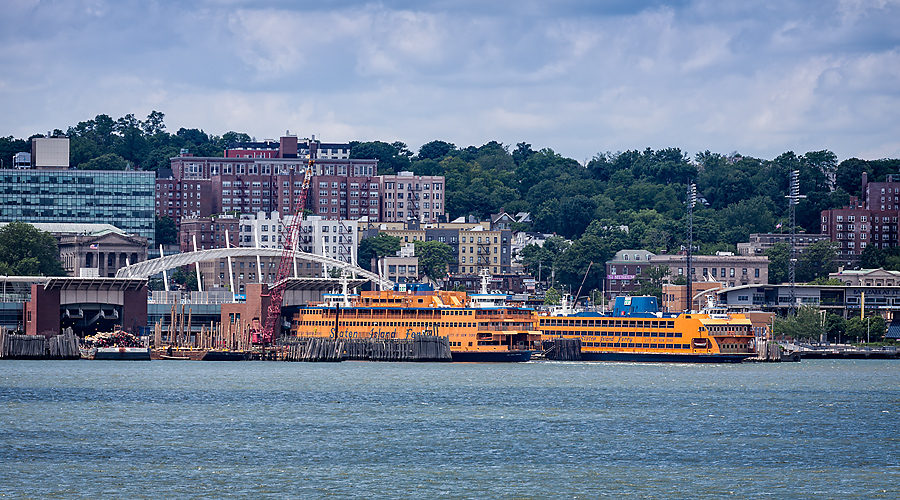 The 6 p.m. ferry arrived and while it was itself delayed a touch, boarding was soon announced. We walked aboard, along with unsuspecting tourists and frowning locals. At the Manhattan terminal, we were spat out in good order. As we joined the herd towards the exit, I noticed a few teenagers, pants down below theirs hips, clapping hands and making much noise. As they approached the escalators just ahead of us, a uniformed guard stood there and gave one of them the fist salute. “Odd,”  I thought, “I guess they are acquaintances.”

As we went down the escalators, Marie and I were separated by the human tide. At the bottom, I heard a commotion behind me and saw the teenagers run past me, darting like rabbits playfully fleeing a fox, shouting to one another to run, run. Once outside, Marie said “Some guy was just mugged ahead of me by a bunch of kids”. I shrugged and must have let out a sigh.

Sure. This is New York. The good, the bad and the ugly live under a common roof. Was the uniform in on it or was it coincidence, or tolerance?Claiming temporary sovereignty on a few inches of subway space, oblivious to personal space, odors, manners and courtesy

The subway home was packed. We boarded an already full car and as we were trying to stay close to one another, were separated again by sword-like hands reaching out for a hold and claiming temporary sovereignty on a few inches of subway space, oblivious to personal space, odors, manners and courtesy. When you board a subway car that is already full, you do so with your teeth clenched and pretending that everyone already sardine-packed got there through a nasty mistake of our universe’s chaos-compliance rules, and you are there to right it all.

So we held our breaths and emerged in Harlem, sweating and swearing while catching them.

Then we looked at each other. Just another day in the city. Nothing to write home about. But then again, not even the Kruger would offer such specie diversity, behavioral anomalies, annoying heat, elevated threat level and sheer variety.

So we figured we’d blog about it.