Summer in January, it must have been Jersey City – Part I

Last week-end, daydreaming of adventure but temporarily unable to explore the beautiful Southern Hemisphere Silvermine that I miss so much, I figured I would do the next best thing and venture into Wild Wild West. I took the less traveled Path under the Hudson River and emerged in Jersey City. It was January 7th, the heart of our winter. 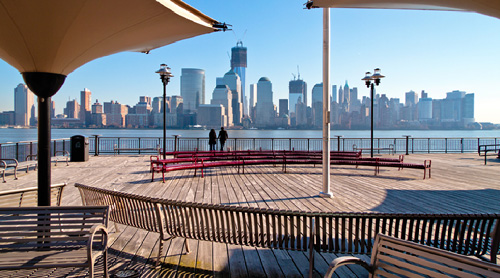 After a few minutes of walking outside along an all-new waterfront, sweating in the sun, I had to admit I’d miscalculated my winter clothing. So I chose the only remaining option and stripped to my t-shirt. An unbelieving look at my phone confirmed I did not have a fever. It was 17°C!

Jersey City on a Saturday – and probably all week – seems just about as abandoned as New York City itself in I Am Legend. While I knew that across the river, Manhattan was bustling with activity and so was Brooklyn behind it, Jersey was dead calm and tomb-like silent.

I walk and walked, taking in the unusual views, the trams, the boats, a sunny waterfront that reminded me of Vancouver’s, the deserted streets and the long piers. A block or two away from the water, I ran into old and soon-to-be abandoned buildings, padlocks on rusty doors and feral cats enjoying free housing. I strolled on with even greater pleasure.

So I will post this in two parts. This first half features the skylines and glass buildings and many vistas. Next will be the old, the odd and the ugly. Which to me is usually the prettiest.