Sunset on Table Mountain, So Beautiful the World Could End Right Now

So you have gone the touristic route up one of the world’s most impressive natural wonders. You are standing at the top of Table Mountain, the city of Cape Town sprawled at your feet and beginning to shimmer with all her lights as the sun readies to set beyond nearby Table Bay.

You might not have bothered venturing off the mechanical track and rather opted to board the Swiss-made cable car for a swift ascent to the summit, 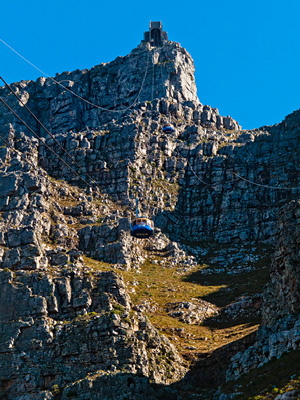 one full kilometer above the ocean. It wasn’t cheap, you complain inwardly. But already, a look around has proven yours was the right decision and you have bought yourself a view so grandiose that Hong Kong’s famous bay would struggle competing.

Let’s recap: you are contemplating South Africa’s second largest and most dynamic city from the vantage point of a 25,000 hectare national park‘s most visited location, Table Mountain’s Upper Cableway Station, 1060m ASL. You climbed up here in less than two minutes aboard a rotating car that granted you a changing view of the sheer rock face next to you, the slopes below, Cape Town’s early evening moods and much ocean beyond. In comparison, a hike up India Venster, the infamously strenuous and challenging hike that inches its way right below the cables, would have taken you anywhere from two to four hours of a gruesome, demanding and dehydrating effort – not to mention the requirement for an absolute lack of height-related and exposure-induced weakness.

Around you up on the Table, you distinctly hear Japanese accents and catch a symphony of international exclamations. Flashes are sparking up in the growing darkness like as many fireflies and you hurry pulling your own camera out of its case and assess the light. Those owning and carrying a tripod tonight will be kings. The rest of you will humbly do their best. But modern

cameras being what they are, you surprise yourself by taking rather amazing shots of mesmerising scenery, complete with car headlight and taillight trails. The secret is resting the camera on a steady, sturdy object, like a mountain…

Soon, you sense a general motion of the crowd towards a westerly facing, aerial view point. Being a sunset veteran, you instinctively know that “it” is about to happen. For the Nth time in our planet’s history, the sun will set and doing so, throw all watchers-by into mild bradychardia – or slow heartbeat. Magic and peace are about to prevail.

You eagerly fight for a key spot on the parapet and steady your camera on a rock, having chosen your ideal spot to catch our life-giving star’s daily disappearance from the world. People around you should go quiet. This is a time for inner dialog much more than outwardly conversation.

Then it all happens, much too fast to keep up with but also too slow to properly write about. A sunset on Table Mountain is like no other experience. One gets torn between the very human emotions of pride, gratefulness, amazement, a fleeting sense of superiority and absolute helplessness at preserving the moment into a shareable, definable reality.

The rest of your evening will be a blur. Cape Town will astonish you with 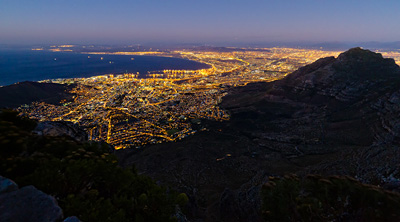 her shiny outfit, all easterly features disappearing into a deep African night and far, far into the west, over a vast ocean and into foreign lands, the sun will slowly vanish, as surely as your will to depart this exceptional plateau. But you must backtrack and find your way to the cable car and down the mountain to your vehicle and once again into an urban explosion of fine dining and the most fantastic wines.

At one point or another, a glass of Nelson Estate Shiraz in hand, you’ll mumble to yourself that despite the end of the world being a slight inconvenience, this would be a great moment for it to happen. Very few things in your life will top a sunset on Table Mountain.