Surf Scoters on the Sea Wall

It would be much funnier if they were called Surf Scooters, but I didn’t name them. 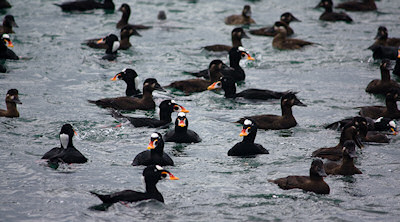 They arrived a few days ago, touching down in the water right next to the Sea Wall. From a distance, the flock looked like a long line of debris afloat on the calm surface of English Bay. But as I got nearer, activity became apparent and the line morphed into a shape-shifting congregation of thousands of birds.

Google revealed that most of them are Surf Scoters, a species of sea ducks. Among them cruise a few Barrow’s Goldeneyes. They seem to be spending most of their time feeding,

diving in groups of 10 to 100 individuals for crustaceans and mollusks. Why they all dive together, I could not say. It appears to be triggered in a ripple effect similar to fish reacting to each other in a bait ball.

These photos were taken early Saturday morning on my way to the park for some fall colours and a new session of macro photography, but these will be the subject of another post. The light was low and the sky covered. Humidity thickened the air. People would pause in their stroll and watch the flock pulsate in all directions like a beating heart, a stone’s throw away from shore.

Even in the rain, Vancouver still manages to amaze me.