Sweat and Chains Above Cape Town

On the road, Photoblogs, South Africa

There is no way to find a more urban hike than the path up Lion’s Head. Surrounded by the city and the sea, the little peak seems to have been squeezed upwards by a mighty hand, providing a surprisingly steep climb to Sunday adventurers and their flip-flops and dogs.

Last year we’d had our Picnic on the Lion’s Head on the gentle slopes below, this year we decided to go all out and scale the beast. 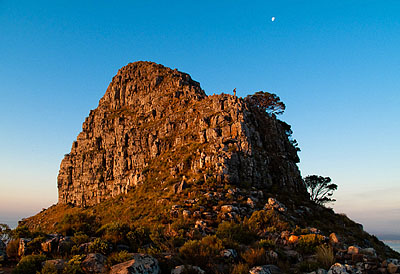 We invited Marijke for the circumstance, unless it was she who invited us…

We parked along the main road under serious surveillance and looked up at the mountain. It’s hard to imagine from the base that an actual path whirls its way around the steep rocky walls in a spiral that leads to a final ledge and the summit beyond.

We had timed ourselves to reach the top before sunset and were obviously packing – not guns, but a feast and drinks. On the way up, we walked by the two paragliding launch pads, deserted even though we had seen a guy get off a cab with is glider. I shed a tear and moved on.

Eventually, the path up Lion’s Head gets so vertical that metal chains have been installed to steady speeding hearts and failing muscles. They are so heavily used every day that holding on to them is quite tricky; the chains themselves are slippery from a thick coating of sweat and the rocks 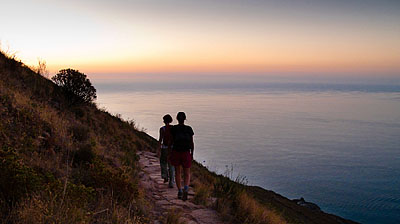 around have been polished by years of human assault.

Marie glided almost effortlessly up and I forgot to take a picture. Fear of heights mon oeil. :-) When we got to the top, after a final climb on a narrow rocky spine, we were greeted by the warm beauty of the golden hour. We sat down on a ledge facing the ocean and spread our picnic. There was G&T for the soul, snoek pate on crackers for the heart and, if memory serves me well, cheese for the roots. Mine, any way. We ate with the 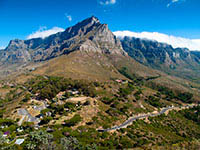 More and more people were arriving at the top, in various combination of shape and attire. Next to us, some idiots’ little barking dog kept chasing a poor dassie (the local equivalent of a marmotte) and we all hoped fervently for it to fall off the face of the earth. After resting a bit longer, we started our descent while the sun’s last rays were slipping below the horizon. The light went down, colors were dimmed one by one and street lights came alive at our feet.

The air was warm and smelled of many flowers and plants.

By the time we reached the car, it was dark. We hadn’t used the headlamps but could see small flickering lights way up on the mountain where people were still scrambling down the chains.

It was a nice hike. And we didn’t even get mugged. 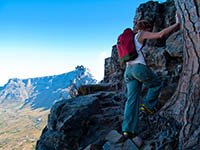 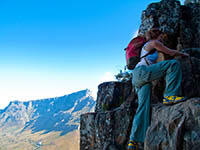 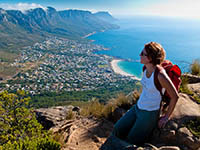