Table Mountain’s India Venster Trail: Do Not Try This At Home…

... But do try it here in Cape Town if you are fit and steady on your feet. (And hands.)
Photoblogs, South Africa 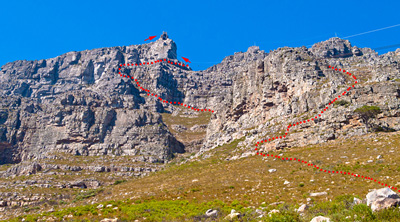 Saturday, I hired the best guide in town and went up India Venster to Table Mountain’s upper Cable­­­­­­way station. The guide was no other than my father-in-law and personal hero Henri, age 78, with whom I pedaled the Cape Argus Pick ‘n Pay Cycle Tour last year.

India Venster is no ordinary hike. While technically not a climb, it ascends straight up from the lower station and soon turns into sheer, vertical rocky terrain, progressing right and left underneath the

cables. It features considerable exposure and several “scram­­­­bles” that require the use of one’s better sense of judgement, balance, guts, strength and an aptitude for simple rock climbing moves, as the trail would probably be rated Class 3 in the typical US system.

There are multiple signs along the way attempting to discourage casual visitors and inexperienced hikers from pursueing such a risky business and trying to entice them to turn around and stay safe on easier routes like Platteklip. But the bottom line is that unless the mountain is fenced off, all trails remain open to anybody willing to tackle them – and there will always be abuse and fatal mistakes.

Henri, however, had done India 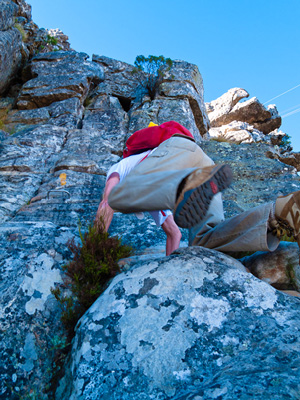 Venster before. He knew the route and warned me that while it wasn’t evil, it would not be that easy either. More than anything, I believe he wanted to test himself; it had been ten years. I said let’s go.

Here are the snapshots. Henri did wonderfully. The hike is superb, the views breathtaking. Everything on India Venster is aerial and exposed. Climbing aids, in the form of chains and metal handles have been installed in the most critical spot. That one and other parts are quite steep or tricky and will not tolerate mistakes. In two or three places, blunders could be fatal. Idiots refrain. Others, enjoy! 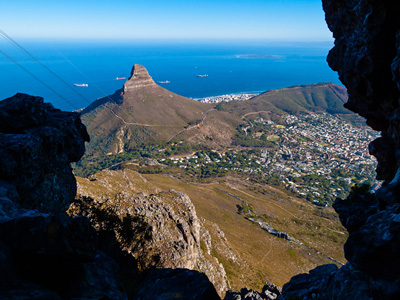 Beautifully framed view from the top of the first scramble

Note: I will soon post more Table Mountain pictures and will likely elaborate on its downside: safety, as in the human factor, seems at an all-time low on the mountain. Muggings are on the rise. What’s being done about it? It appears, nothing.

(I apologize for the over-saturated colors, this was processed on a non-color-corrected laptop…) 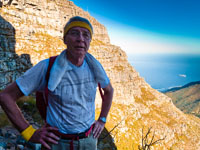 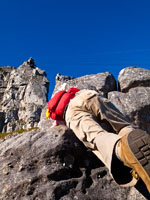