Taking Woopra out for a spin

New kid on the trendy block of web statistics, Woopra is another one of those applications that seem to explode into stardom nearly overnight. The concept hasn’t even emerged out of beta testing yet and already, it is the talk of the hour. The design team had planned to steer 250 beta testers into a controlled study; they now have over 25,000. Something must have gone right. 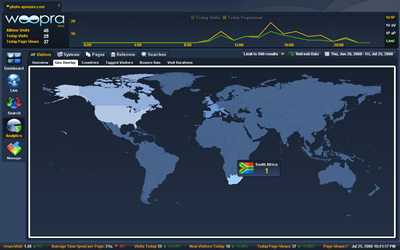 For someone who is currently using Google Analytics – the so far unchallenged leader of the pack – to track their web site traffic and statistics, Woopra will feel both familiar and weird. There are many similarities – after all they tap into pretty much the same data to render their stats – but there are also interesting differences. Let’s start with the interface; anybody familiar with Google products, and Analytics is no exception, knows that their engineers either favour plain, white backgrounds with minimal eye candy, or have something stuck… somewhere. Woopra is the opposite: total pleasure for the eyes, color-rich interface, dark theme. And just as I’ve now turned to Gmail Redesigned for a richer Gmail interface, Woopra hits the spot in the same tones.

Then there’s the very important fact that while Google Analytics and most other similar tools are web-based, Woopra is a desktop application. This has great advantages but also means that the host application needs to be installed on each computer one intends to track from. Worth mentioning, though: Woopra offers a minimalistic web-based mock-up of their stats readout accessible from anywhere online via your account.

Yet another noticeable difference between the two soon-to-be rivals, is the fact that Google Analytics remains very evasive when it comes to singling out individual visitors, concentrating rather on networks, keywords and general traffic. Woopra, on the other hand, approaches the issue like StatCounter does, offering very detailed information about every single visitor in a voyeuristic way that will probably appeal most to low-traffic site webmasters and bloggers.

And here we encounter the most significant difference yet: while Google’s stats are only updated daily, Woopra woops results to you in real time. Visitors to the site are reported just about instantly, and in that aspect, Woopra reminds me of Geoloc and its flashing dots. But things are now pushed one step further: the webmaster is able to initiate a live chat session with anybody currently visiting the site! Are you a blogger from South Africa? You notice a fellow SAfrican visiting your blog, in real time, and you send them a chat offer that appears in their browser, from the "webmaster". If they accept it, a standard chat window opens up and you are live with your visitor. How cool is that? Maybe not unique, but now coming to the masses.

What else? Oh yes, the downside. Well, for one thing, how do YOU feel about having so much of your personal information revealed and possibly exploited by the webmaster of a site you are visiting, or getting a chat request by said webmaster when you wanted to remain anonymous? Not good? That’s too bad, because it’s been happening for ages. Woopra just makes it more user-friendly. Now what do I mean by personal information? Nothing worth killing for; your (approximate) location, browser version, operating system, screen resolution, language, IP number, point or web site of origin, keywords searched for, duration of your visit, and color of your socks. Well maybe not the color, but whether you are wearing one or two. But not your name, not your email, nor phone number. Not your secret goulash recipe. Nothing you haven’t flashed publicly on the web for years already.

Another problem is that Woopra, probably because of its unexpected and sudden success, is still only allowing sign-ups upon an individual web site approval process that is taking days and sometimes weeks. I waited 2 weeks for mine. Others wave waited for months. But hey, the thing’s still a beta, so I guess we can cut them some slack. And yes, I’ve found a few bugs, and taken a couple of notes of features I think might be important.

But really, in the end, Woopra is fun to play and interact with, or just fun to watch. Will it replace my Google Analytics completely? Time will tell. For now, I’m hooked.