There’s no way around it, the place is a zoo. Too close to the city to be off limits yet far enough to yield a vague disorientation, Coney Island is the closest ocean-front beach as the famous crow flies from Manhattan – and that bird doesn’t fly so well.

For those unfamiliar, Coney is no longer an island. A creek separating the peninsula from the mainland was filled long ago and what had been the southernmost barrier island of Long Island was integrated and tamed. Its name is widely accepted to be of Dutch origin and would mean Rabbit Island. These are long extinct. Man is cruel. And hungry.

Yet if summertime Coney Island is a wildly animated place with its amusement park, aquarium and beaches, come fall the madness subsides. Doors are closed, metal curtains lowered and locked, rides deserted and the beaches, left empty. A cold wind blows, garbage piles up on abandoned streets and the wild cats become braver.

At that point, if your eyes are curious and your mind awake, a walk about turns into a pleasant expedition across a strange land. Walls remain painted in loud colors and complex murals, old signs await in silence the return of summer,

rare people hurry past, the waterfront sleeps. You’re in the other Coney Island.

On my last visit, with sunset in mind, I set out for the Easternmost tip of Coney Island, walking down Neptune Ave and onto the beach as soon as I could reach it. On my way back from the point, as darkness was gaining, bizarre "No Trespassing" signs seemed to restrict access off the beach, but I found a gap and ventured back into a residential neighborhood. Strange high fences were cutting right through the area and I couldn’t figure out why. The houses looked identical on both sides yet razor wire separated them. A few people gave me suspicious looks as I walked along hurriedly with my photo back-back.

Eventually, I reached a heavily fortified checkpoint – and realized I was coming in from the inside of the restricted zone. I approached a policeman at the gate and apologetically asked where on Earth I was. "This is a gated community," he said. "So I’m in the wrong place?" I asked. He smiled and nodded. I looked up. The huge sign crowning the entrance said "Seagate". I’d never heard of such a community in New York. My suspicion rose exponentially as I analyzed the implications of such a thing. But since I was persona non grata, I thanked and moved on.

Further research has revealed a self-contained municipality founded around 1900 and allowed its own laws and police force. It’s about 10 blocks long by 5 blocks wide and includes everything west of W 37th St. If you are a resident, you need a permit to enter, all your beaches

are private (a major crime if you ask me, waterfront should never be private) and if you’re expecting visitors from the real world, you must report them to Control or they won’t be allowed in! Weird. Has anyone seen Les rivières pourpres (The Crimson Rivers)? Remember the Faculty, living in autarky and selecting their… But I’m getting carried away.

The bottom line is this: Coney Island is full of surprises, some good, some bad. That alone, in my opinion, justifies a visit. And of course, there’re all the cats. Wild, it would seem, and given food by good-hearted souls. Cats, as you can imagine, know no gates. How lucky they are.

The following is a longish photo essay on the "other" Coney Island. Piers, beaches, sand, signs, doors, colors, cats and skies. The few people shots go back to early fall. The rest are from this week. Enjoy! 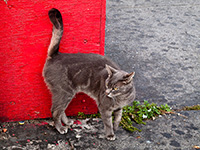 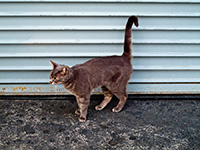