That Perspective we Gain and Lose

Marie was just reminding me—very appropriately—of the way one can just crave fondue. There is nothing rational about such a dish and how it creeps into your mind, the cheese melting your willpower and trapping your senses. It will probably fall like a ton of bricks into your stomach and force you to retire early, yet it is just unavoidably satisfying.

I think fondue is perfect mountain food. I should say perfect after-mountain food, as it is best consumed to close a long day of hiking or climbing. And I am afraid those mountains must be the Alps for the fondue to fully come to life. The best cheese, white wine and mushrooms, a pot frotté with garlic, a flame, fresh bread. So simple. When I think about fondue, one memory always emerges first, bitter and sweet.

The year was 2004. Hurricane Ivan was devastating Grand Cayman. I sat in a little Chamonix restaurant overlooking the river Arve with the majestic hump of Mont Blanc towering high above me, worried to death.

I had decided to go on with my vacation plans despite the approaching storm, having boarded up my Little Cayman waterfront house the best I could and decided that there was nothing more I could do to change the course of events to come. Our resort had been secured as well as possible and we had chosen to drive our boat Banana Wind to shelter in Grand Cayman, where she was put up on stills next to the sound and away from shore to avoid losing her to coastal flooding.

So I had gone ahead and packed my paraglider, loaded it on the boat with my suitcase and crossed to the main island on seas that were dangerously calm. Then I had flown to France as the giant depression neared Jamaica. As always, some people in Little Cayman had elected to stay behind, as many long-time islanders develop the syndrome of “It will miss us” and adopt an ostrich attitude. 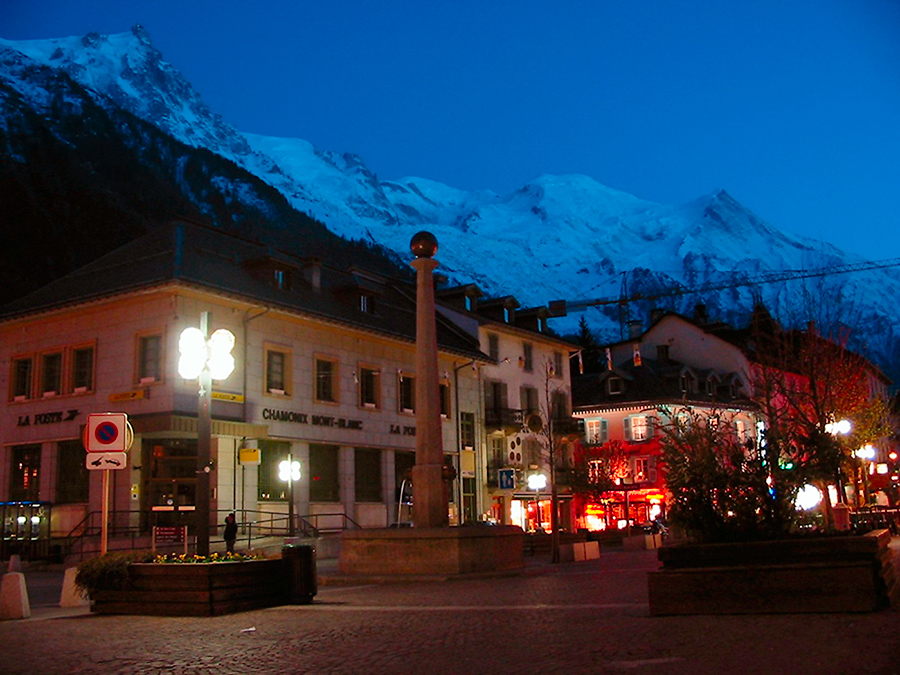 But of course, once in the Alps, I was unable to clear the weather out of my mind and simply fly my glider. I spent most of my time in internet cafés, watching the Weather Channel and the news, trying to figure out the impending disaster’s outcome.

Category 5 hurricane Ivan headed straight for Little Cayman, smallest of the three islands, and then all communications were lost. The small scale of weather maps showed the super storm going right over the islands. Long hours passed. Then the first reports started coming in, sporadically, through various unlikely channels.

A few people, it seemed, had managed to send text messages to relatives in the States and news of the devastation slowly were emerging. The capital Georgetown appeared to be destroyed. Wind gusts were reported to have reached 270 km/h (167 mi/h). Power was out island-wide. The city was flooded with a mixture of rain, ocean water and raw sewage. Graves were releasing their content which floated around in the streets and gardens. People were missing. Entire buildings and houses were gone from waterfront locations.

A few US-based web sites were hastily put together and started posting messages from friends and family desperately seeking news from their loved ones. And still, not a single word from my island.

Little Cayman is a very small, low-lying island made of ironshore-covered limestone. Twelve miles long and two miles wide, it offers absolutely no protection against heavy winds and storm surge. Since the much larger Grand Cayman had been hit so hard, I assumed that the smaller islands had suffered even more, and at that point, I had to face the facts: it was most probable that I no longer had a home, nor a place to work. They had to have been washed away completely by the surge. 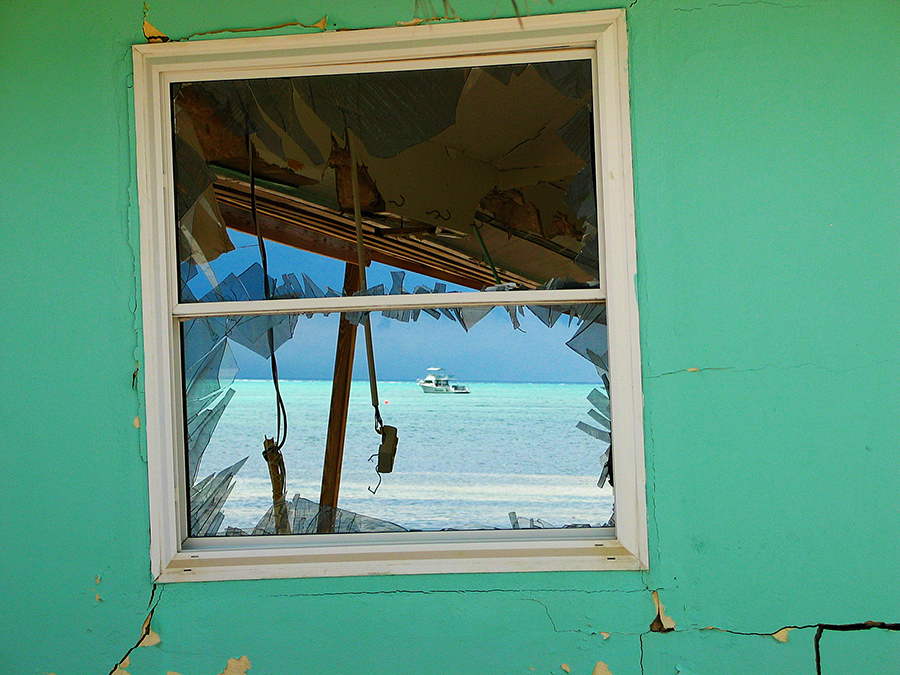 Coming back to a scarred island

I pondered the fate of friends who had chosen to stay behind despite the evacuation notice.

So there I sat, in my adorable French mountain town, eating an exceptional fondue with chanterelles, looking up at the last rays of sunshine burning up the roof of Europe while the valley lay in cold September shadows, attempting to grasp a very simple yet staggering concept: it seemed I was suddenly unemployed, homeless, and stranded in France. Pretty much everything I still owned, I figured, was packed away in a travel bag next to my paraglider up in the hotel room.

I tried to picture my gutted house, battering waves perfecting their work, DVD cases floating among the debris, broken picture frames and shattered glass, desolation everywhere. And I battled to come to terms with the new reality: this was, then and there, a new beginning. Absolute freedom, no chains, no ties. Abruptly severed material bonds. What would I make of it? What was more real, the mountain above me or a small devastated island across an ocean, thousands of miles away? I tried to gain perspective by first losing it. I was failing.

Feeling lost and too far away from the drama, I left the Alps and flew back to North America, overshooting the East Coast and landing in San Francisco. I had by then re-established intermittent contact with friends on the main island and was taking orders for essential supplies that were now in absolute shortage: toilet paper, water bottles, soap and disinfectant, medicine, personal hygiene items. Doritos.

When the Cayman Islands finally reopened and international flights resumed, I immediately returned from California with as many duffel bags of supplies as I could manage. The airlines were very accommodating and since few people were flying inbound, no extra weight was charged.

I was stranded in Grand Cayman for a few days. It turned out Ivan had miraculously avoided Little Cayman and mostly unleashed its fury on the main island, which it tore apart. The devastation was incredible. Riots were a real concern and a British battleship had been dispatched and was at anchor offshore. A 5:00 PM curfew was in effect. There was no power, no phone, no water. Fuel was being heavily rationed. 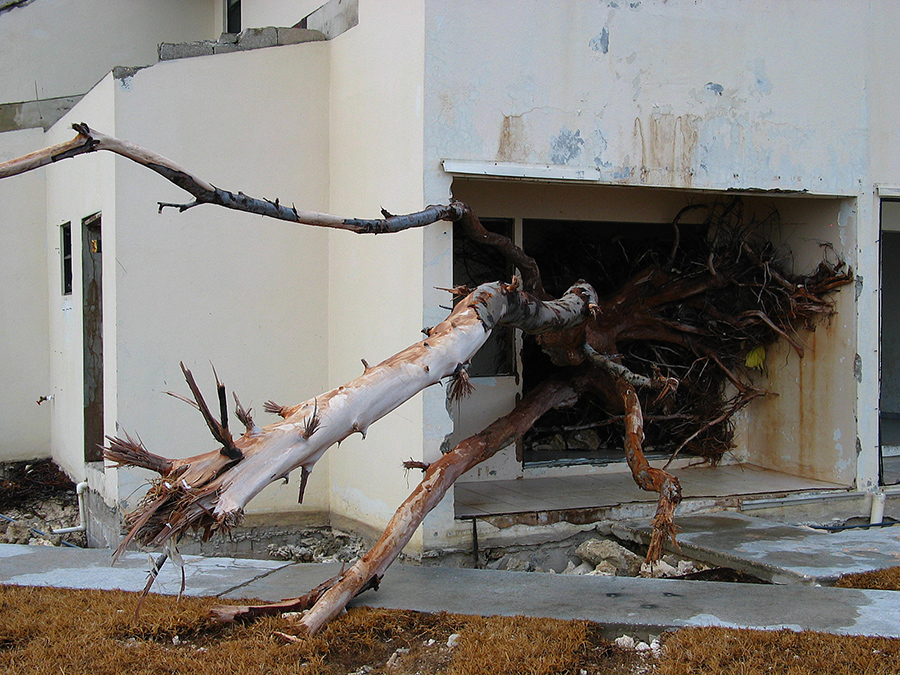 Hundreds of Caymanians waited in line in front of grocery stores, to be admitted in a few at a time, at the shine of a flashlight; but most of the dark shelves were empty any way. People were going through the rubble of what had been their home, looking for signs of the belongings which had mattered most to them, overwhelmed, numb.

My friends in Georgetown were coping the best they could. Some were heroic, others selfish; human nature prevailed. One brave couple had spent an entire night in their flooded single-storey house while the storm raged outside, perched on the kitchen counter and taking turns holding their crying newborn baby at arms length to keep it above the rising water, wondering if and when the wind was finally going to tear the roof off and kill all hope.

Eventually, good news arrived from Little Cayman. Everyone was safe and most houses were still standing. My home was intact aside from some minor water damage. The work place was there too, even though tourism had come to a grinding halt.

Weeks later, we found our dive boat Banana Wind washed up on a distant North Sound shore in Grand Cayman, her strong aluminum canopy gone, the engines trashed and the hull damaged. It was the saddest thing I have ever seen. We did eventually get her back in the water and fitted with new four-stroke Honda engines, but the canopy was missing and her scars never went away. She sailed again for some time, bravely taking us to our regular dive sites, but the magic was gone. She was suffering and the pain lingered.

It took months for the country to get back on its feet. We spent the following weeks shoveling sand and stones out of the swimming pool, while other resorts which had not been so lucky were being rebuilt.

Ivan had unfortunately set records and it was the tenth strongest Atlantic hurricane recorded to that date. As per the Wikipedia, it had been as large as the state of Texas, and had later spawned a hundred and nineteen tornadoes in the U.S. Scientists theorized that at its peak, the maximum wave height within Ivan’s eye wall reached a hundred and thirty one feet (forty meters).

But in the end, the storm went way.

Sure it will linger for a long time in hearts and minds but even there, eventually, it will be replaced by happier memories. It’s really only a matter of perspective.