The Adirondack Train to New York

A coffee at my side, I’m sitting in the almost deserted café car of Amtrack’s Adirondack train to New York, pondering how much more comfortable than planes these trains are… A wide table all to myself that could sit four people easily, the smell of coffee and breakfast, the gentle rocking – I love restaurant cars. They represent everything a plane still can’t offer,

decades after Boeing came up with its Jumbo jet’s hump as a potential lounge area. On a train, one can stretch legs and walk around without having to fear the wrath of overzealous and security-obsessed flight attendants. Individual seats are as wide and comfortable as airline first class seats, they recline further, have knee and foot rests, a wide unobstructed window, curtains, and ever-changing scenery. And on top of that, there’s a 120 V. power outlet for each passenger, hence my typing of this on my laptop, live. The posting will be delayed a bit. No Wi-Fi yet.

Having left Montreal’s Central Station at 9:30 AM, we’ll arrive at New York’s Penn around 8:30 PM, hardly a swift way to travel when a direct flight would take under 3 hours. But it’s as much fun and quite cheaper; a round-trip from Montreal to New York and back on Amtrak costs US$ 120.00, or roughly the price of a cab ride or two from Brooklyn to one of the local NYC airports.

Our train is rather short. Five cars and a engine,

the café car being tucked half way down the row. It opened soon after we left, closed during the border crossing and re-opened afterward.

The train stops about 20 times along the way. Most spots are in semi-rural areas and in some cases the station platform is so short that the train stops right across a road leading to it, blocking rare traffic for a few minutes, and forcing the crew to only use the one exit on the entire train that faces the platform. At wider stations, a crew member passes by to announce which door to use if we 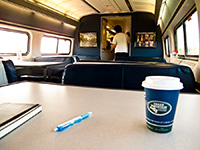 want to stretch our legs for two minutes in the sun or smoke (!), and this is always a different door then the exiting/boarding one. The full-trip passengers have been seated at the rear of the train and we are being given a little extra consideration. But these guys are operating on time and the crew man on the dock calls the remaining stretching time in minutes and seconds! At 30 seconds, he’s herding everyone back on, or else.

We initially followed Lake Champlain’s western bank to the south and then pushed on. The so-called Adirondacks were quite disappointing. I could only handle so many identical fields and trees and green prairies and eventually fell asleep for a while. After Albany, we picked up some speed. The tracks must be better down here, and there are less road crossings. Yet the engine is still blowing its whistle – which

The pattern is always the same: two long blasts, one short, one long. How long they are seems to depend on our speed. The faster we go, the longer the blasts. We haven’t seen much opposite traffic at all. At one point, our conductor explained that we were parking on a side track for 10 to 15 minutes to give way to the northbound train, a sister Amtrak convoy which passed us with a merry whistle blow.

But it won’t be long now. Soon, the train will leave the Hudson’s eastern bank and plunge underground for a final stretch into Manhattan. I will have arrived. Marie is waiting for me at Penn Station. Ah, les quais de gare…

Apologies for the very crappy pictures taken from a fast moving train, barely worth posting… 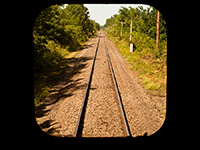