The Airplanes of my Dreams

A hundred years ago or so, we had not even left the ground
Airborne, Photoblogs

This will be a self-indulging blog post, insomuch as one post can be more so than another, given the rather egocentric nature of blogging to begin with. This disclaimer out of the way, it is no secret that I love flying, and I adore planes. I will take pictures of planes before I even take pictures of birds. But recently on Staten Island, they competed wing to wing.

The contrail shot below is my favorite. Marie was scouting for foragees in the distance and as I glanced at her, she pointed theatrically to the south. It took me a while to figure out what she was showing me, and then a white arrow shot from behind a tree. I could instantly tell it was a quad-jet, so one of only three passenger aircraft currently cruising through our skies with four engines: the many versions of the Boeing 747, the Airbus A340 and the mighty Airbus A380. 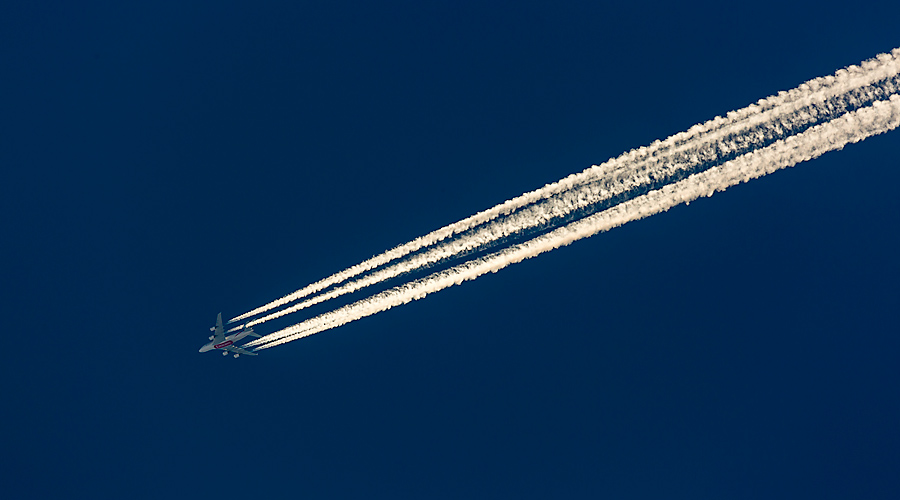 As the plane grew closer, I trained my telephoto on it and easily identified an Emirates A380-800. It was flight UAE232, flying from Washington Dulles to Dubai; it had just reached its initial cruising altitude of 35,000 feet, surfing the tropopause at 625 miles per hour. Fully loaded with fuel, cargo and passengers, that was the highest flight level the plane could reach this early in the flight. As it burned more fuel and crossed the ocean, it would eventually perform step climbs to 37,000, 39,000 and finally 41,000 feet as thinner air is more efficient.

I love how close the giant looked, and how crisp the contrails were, this far from the ground, through a simple lens. It is quite possible that up there, at the very moment I was looking up, someone was actually taking a shower in the sky. Such is the comfort one gets for $20,000.

Amazingly, and quite surprisingly, Emirates now only operates two kinds of aircraft: an Airbus (the A380-800) and a Boeing (the B777 in multiple versions). They own a whooping ninety-four A380’s, which is very close to half the number of currently delivered aircraft throughout the world! Distant second are Singapore Airlines and Qantas with about two dozen each.

Listen to me… It saddens me deeply that from being a pilot, I have become a plane spotter. That I know modern aircraft not from the intimate feeling of running my hand along a leading edge or on the rubber of a tire as high as I am, or from the comforting heaviness that comes with TO/GA thrust, or the chirp of autopilot disengage energizing my senses, but from clicking the—albeit surprisingly accurate—flat simulation of such aircraft on an LCD screen.

But still, I love flying, and I walk with my eyes turned skyward. Most of the remaining pictures here were taken near JFK, as shown by the airport views. I was lucky enough to catch another A380, that one inbound from Paris in the minimalist Air France livery. Traffic was landing from the southeast on parallel runways 31L and 31R, and departing on 31L, closest to me. 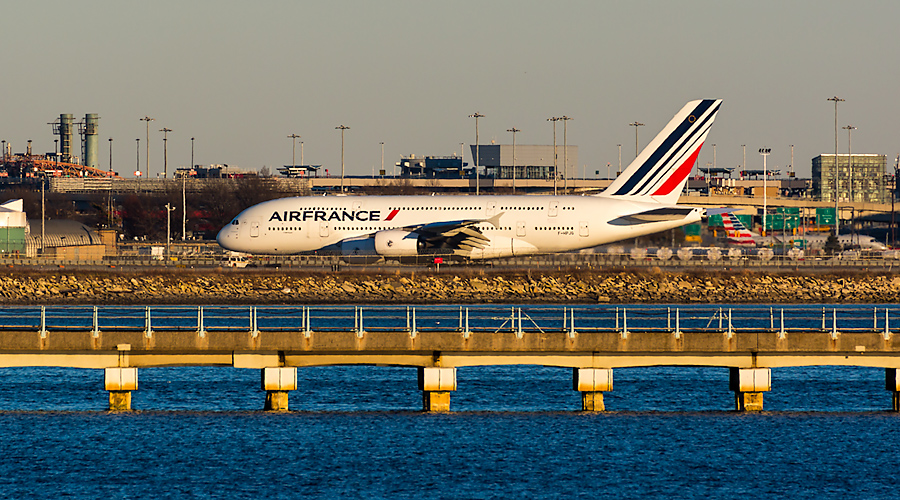 Air France A380 arrives at JFK

There is a beautiful Aeroflot Boeing 777 in there, an ironic Russian fleet choice if I ever saw one. There is a China Airlines Boeing 747-8I, a new longer version that was meant to revive the legendary 747 Jumbo Jet with newer, fuel-efficient engines and a new wing design. However the future of very large planes seems uncertain these days, as shown by Airbus’ struggle to sell enough A380’s to make them count.

It appears smaller twin engines such as the Boeing 787 and Airbus A350, or even the upcoming Boeing 777-9X might be the new favorites, as they offer amazing range combined with fuel efficiency, quiet engines, modern designs and most of all, shorter take-off and landing distances that allow airlines to skip their hubs and target secondary destinations easily, in other words flying non-stop directly where passengers want to go.

Planes have only been around for a mere century. They changed the world radically. Yet they also hurt it badly, and probably play a substantial part in the pending disaster. To avoid this disaster, in addition to smartly ecological we must be supremely technologically and scientifically capable. Planes, shrinking the planet to a giant neighborhood, make that possible. Will the vicious circle collapse or triumph? The next few decades should tell.