The Catskills in a yellow autumn robe

Living in New York, one tends to forget. When daily routine is deeply impregnated by the constant sound of emergency vehicle sirens, the furious honking of horns, the growling of hovering choppers, the roaring of an underground 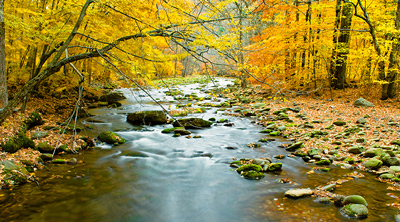 train, the trepidation of manic cab rides, when one gets accustomed to meeting 50 people at a street corner and taking on 100 more when the light changes, when boarding a ferry in five minutes along with half a thousand others becomes casual, when, navigating the evening sidewalks in a sea of heads and hats one takes comfort in the brilliant glow of flashing neon signs the size of buildings, concepts like peace, silence and nature are driven far into the recesses of an urbaneer’s mind, frozen and kept intact for future use, but so deep and remote one tends to forget them.

So when we rented a car and headed north a few weeks ago to show Marie’s mom our countryside, the abstraction had not yet taken shape as we left the city. Our Brooklyn trees were lazily rehearsing their fall appearance, still dressed in dull tones and sheepish tints. We picked our passenger up at the infamous Inn on 23rd and left Manhattan in the same stride, joining the Henry Hudson Parkway in very manageable traffic. I had planned to customarily follow I87 north as indicated by the 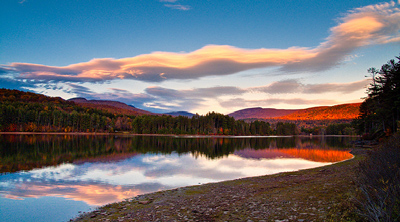 Establishment of Google Maps and various other sources but Marie convinced me at the last minute to trash my plan and cross into Jersey at the George Washington Bridge. The sooner away from the city, the better, she figured.

She was so right. As soon as we’d crossed the river and turned north onto the Palisades Parkway, the largest American city instantly vanished around us replaced by a perfectly paved highway slicing its way through thick woods that were no longer promising but delivering the fall colors we’d hoped for. We weren’t going far and took our time on the road, stopping at a family farm stall and picnicking at their very garden table, still confused by our New York armor and attempting to reconcile such friendly and open simplicity. We hadn’t heard honking in a couple of hours and were sliding into a languorous stupor.

By the time we reached Woodstock, the kaleidoscope had become really exciting. We were pointing right and left like children at a zoo and maples were competing with oaks for our attention. We drove into the small town with curious eyes, uninitiated visitors awarded audience to a legend. We had turned into tourists again, in this eternal 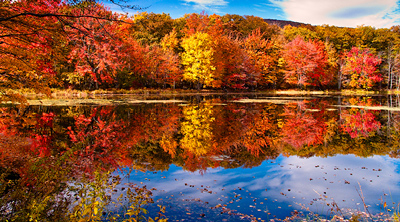 cycle that enhances our curiosity and tolerance levels while we travel and explore the world, but returns us to a defensive stance as we get back closer to home.

Our shelter for the next few nights was located just outside of town, surrounded by beautiful trees and flanked by a chilly stream that flowed light and clear: a simple motel-style inn, but well kept, pretty, clean and incredibly quiet. This was another world, a mere two or three hours from the madness of New York. We might as well have been on another planet.

The next couple of days were lazily laced with delicious meals, sumptuous picnics, scenic drives, mountain streams, incredible fall colors, the wind in the trees, birds chirping, cats, peace signs and a growing desire to stay forever. Then we relocated not very far on the outskirts of Kingston, to an old 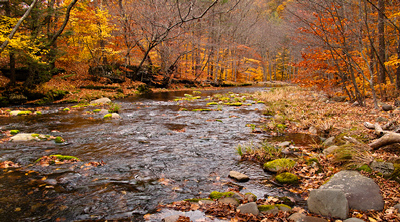 stone house turned B&B where the wooden floors creaked endlessly and walls were as thick as a fort’s.

We explored some more, met some fog and rain – both surprisingly turning the landscape into an even prettier gallery, drove far into the silent Catskill Mountains and like Gollum foraging deep into the Earth for an untold time, we were forgotten to the world.

But the short trip still had to come to an end and soon we were aiming south towards home, immersed into rapidly thickening traffic on the eastern bank of the Hudson. Honking resumed, the world spun around us in an urban frenzy, we had returned to the City.

But our eyes were filled with bright reds and yellows, our minds with awe and our ears with the brushing of leaves in the wind and the message of raindrops in a perfect silence. So near and yet so far, there remains a 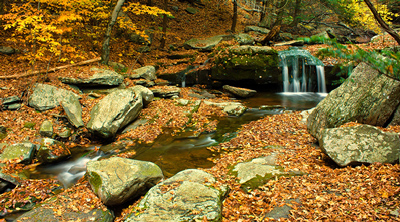 countryside to New York City, an antidote to brutal civilization and endless opportunity. May it live forever and provide us with sanity in times of need.

And yet may it instill in us the ability to appreciate in contrast the harsh striking beauty of Manhattan’s urban core and the hyper-futuristic displays of Times Square, gone far beyond salvage, out of reality and into science-fiction, into extremes so maddening they are elegant, into a corruption of space and an aggression of the senses that force us to grow into mutants, to become better than we might be and to cope and adjust and appreciate what we still have – and most of all to tolerate one another because, for better and for worse, 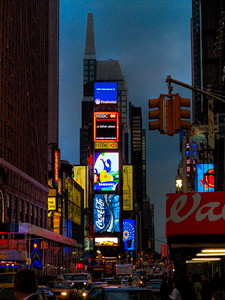 this is the apogee of civilization. 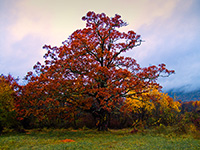