Outbound to a hike in Cold Spring
New York, On the road, Photoblogs

In a daring attempt to tear New England and the Canadian Atlantic Provinces off from the bulk of our North American continent, the Hudson River is born in the New York Harbor at the bottom of Long Island and immediately leaves New Jersey behind, slicing her way due north through a self-named valley and into the Adirondack mountains, in a mad dash towards the Champlain Lake and Saint Lawrence River.

It will not succeed any time soon. Our continent spent millions of years face-lifting itself and is not yet willing to let go of its beautiful Eastern Seaboard.

For those of you thinking I’ve got it all wrong – it’s the other way around, the river is born far to the north and descends into NYC – you’re right. And yet it is almost impossible to think of a river such as the Hudson not originating in New York City, center of the universe and source of All Things Great, as everyone knows it here. It’s as though the river flowed upwards in search of her own roots, and this actually isn’t so far-fetched because she remains tidal far inland, seemingly indecisive and flowing back and forth in a nautical yo-yo. 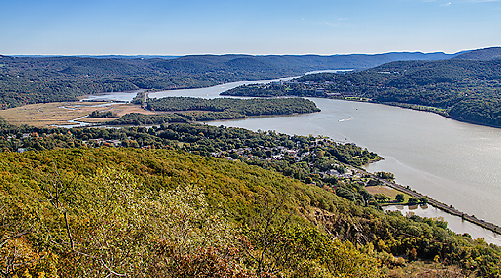 There is an English train that runs between,
Grand Central here and Poughkeepsie-ville,
And at the dead of night the whistle blows,
And people hear she’s running still.

That train isn’t filled with Chris de Burgh’s souls of the dead but with the very much alive commuters who live along the eastern bank of the Hudson Valley. Them, and hikers. Because you see, a mere hour away from the bustling Big Apple lie beautiful trails that crisscross their way up small mountains in a park called Hudson Highlands.

And while Amtrak’s train to Montreal cruises right along on the way to Canada, the park had until now managed to stay under my radar. So last week, following a lead from our good friends Deb and Jim, I rode the subway to Grand Central, barely caught my Metro North train as the doors were closing – I had lingered a few minutes too long in the station buying flan pâtissier and a coffee – and headed off the Manhattan island along with a mixed crowd.

For a backpack, I had my photo bag and all lenses. For trail food, two slices of flan. A bottle of water. My phone with a topo map. A flash light – one never knows. Sharp blades. The Asus tablet for turning the train into an office. Curiosity cranked to the max.

I hopped off the train in Cold Spring, some 80 kilometers from home as the crow flies. Many hikers were also getting off there, most glancing around them with hesitant looks. It would seem the area had been off their radar too. Bear Mountain rose to the west, very close across the narrowed down Hudson.

To the northeast, just above town, was a bulky forested shape, its left flank showing the scar of an old quarry, not unlike the gaping wound left into the flank of a fish by a shark bite. The summit is called Bull Mountain and tops the surrounding ridges at 1,400 feet above sea level. That’s where I was headed. 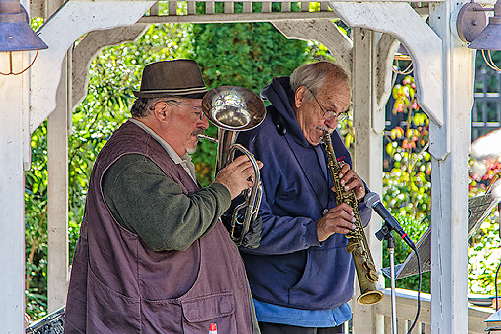 I walked off the open-air station into the small town, found a tiny tourist office and inquired about a trail map. A pleasant older lady gave me directions through a few blocks of city streets, down a quarter of a mile of road 9D and into a small parking lot where I was told I would find a wooden box containing maps.

As I approached the box, a healthy looking Asian lady in serious hiking apparel (including two telescopic poles) waved at me and said with a strong accent: “You’ hiker?” Unsure of the importance of my reply, I opted for a neutral answer: “Not yet here.” She seemed to read between the lines and signaled me to come closer. “You know the trails?” she asked again. “No,” I said, “I was going to grab a map.”

“Take this,” she ordered handing me a ziplock bag with a few maps, “I just found here behind this rock.” “But the box,” I hesitated.

I opened said box expecting it to be empty, but it was filled with what appeared to be black and white copies of a very simple hand-drawn map folded in three. “No,” she replied categorically, “that’ shit.”

She bossily made me unfold the content of her ziplock. Inside was a very nice color topographic map set. I took out two maps, unfolded them. “Not this one,” she said twice as I was showing her the maps. There were three sections covering the entire park and as it turns out, the important one was missing. Whoever had lost these had kept the key document. “You no worry,” said the lady reassuringly.  “You stay on white trail, and look ahead far for markers so no lose path.” I thanked her and was on my way. 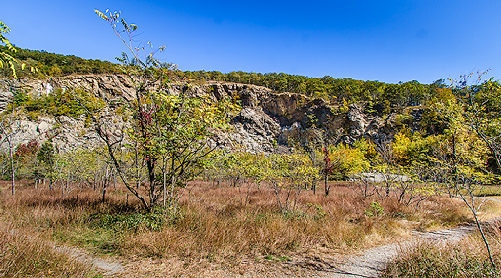 I had indeed planned on following the white trail to the summit, as per web reviews. Trails were well marked with the usual color plastic discs. White initially climbed in a “Z” fashion under a thick tree canopy which for some odd reason reminded me of the approach hike to the Lions in BC. Eventually I emerged into the quarry bowl and was met by an annoyed man who walked up to me and asked: “Do you know where the white is? I’ve been going in circles in here for a half-hour and can’t seem to find my way up.” I did not know and didn’t yet care as I was setting up for a few pictures of the sunny but contrast-y amphitheater, so he launched back into his quest and disappeared.

When the time came to follow him, I found a narrow path that climbed clockwise around the upper rim and steepened greatly. The white markers were still present so I pushed up. Silence and calm were nearly perfect, only broken by the long blow of train whistles far down below. The air was a bit chilly but not cold enough for me to keep a jacket on while climbing, and having made the mistake of wearing a cotton t-shirt I ended up with a soaked back that forced me to dress and undress repeatedly, as I chilled and warmed up. This would cost me a cold the following week.

It was early October and timid colors had not begun their Fall symphony. The woods were still rather green and lush, and mushrooms few and apart. My trail climbed steadily above the quarry and further followed the ridge upward, rarely venturing far into the forest. After maybe an hour and a half, having wasted much time in the wild looking for ‘shrooms, I discovered a nice rocky clearing with a view south and switched to a wide-angle lens for panoramic shots. 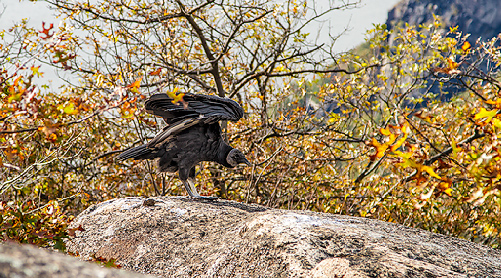 A turkey vulture challenges me

Soon thereafter, I arrived at what appeared to be a sub-summit outcropping. I walked out of the trees carelessly onto another patch of rocks, only to realize it was already occupied.

Freezing, I reached for the camera around my neck. A nice size turkey vulture was sitting there and did not seem keen on giving his spot away. The 22 mm focal length of my lens turned the poor bird into a mere crow on the LCD, so I very slowly dropped my backpack and switched lenses with the dampened moves of a chameleon, the bird of prey watching nervously from 20 or 30 feet away. The next shots were better. Finally, as I stepped a bit too close, he stretched, opened his wings once, took a long last look at me and called it a day. He had an impressive wing span and quickly drifted around the ridge.

I sat down and ate my flan, enjoying a late afternoon sun and windless quadrant, then walked up the rest of the way to the top of my immediate world…

[This is part 1 of a story which then falls] 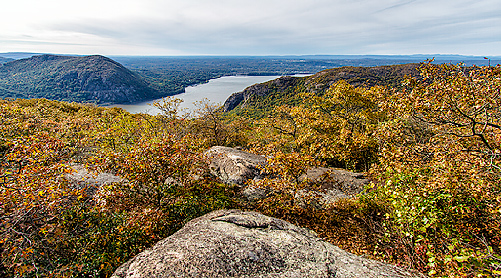 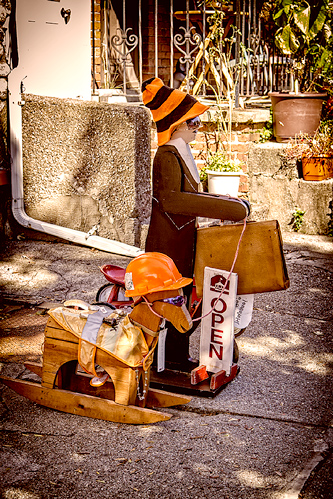