Well kids, we’ll start today’s class with a trivia: can anyone tell me 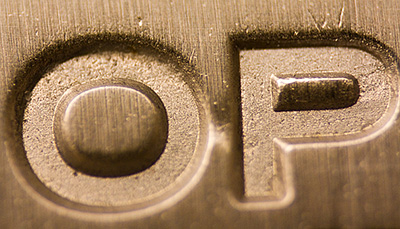 what this photo is? The Frenchies among you are at an advantage, but you won’t know that until later… Can’t guess? Just read on then…

A few weeks ago, I stumbled upon some pretty amazing macro photography and my curiosity was triggered. I began reading more on the subject, trying to assess whether or not decent macro could be achieved with a minimal budget. I was not about to launch into yet another expensive hobby and wisely decided to stay away from Canon’s $900 MP-E 65mm f/2.8 1-5X Macro Lens. Some day, maybe.

Further reading revealed that many people successfully used modest setups involving belows and enlarger lenses. I found a Rodenstock Rodagon lens on eBay for a laugh and 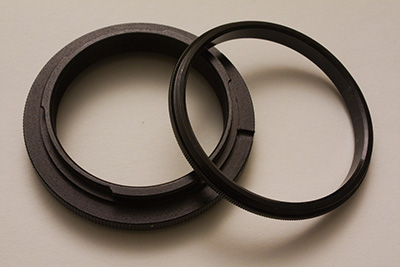 ordered it. It has arrived but I can’t start my trials until I get my hands on bellows and an adapter ring.

But then I read some more and I got into the really cool stuff. Reversing a lens, it seemed, allowed for very interesting macro results, keeping quality decent and cost down. I knew I had found my experiment’s first step.

I ordered two rings, on eBay once again, for a total of $18.78 shipping included. The two small metal adapters, once arrived from India, didn’t look like much. One was going to allow me to mount a lens reversed on my camera body, the other would let me mount one lens reversed in front of a normally mounted lens.

I did my first series of tests last night, late, with a throbbing headache from my lingering cold. The conditions were bad, 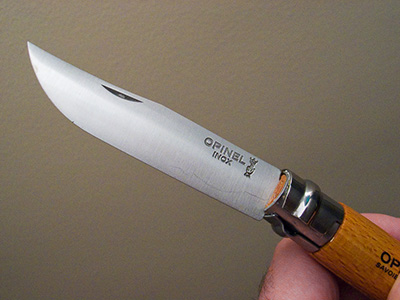 my patience low and my bed was calling. But I needed to know. These are everything but good shots. But the initial results are quite amazing. Here is a non-macro shot of my Opinel knife, king of French-made outdoor tools. Do you see where I’m going with this? Yes. That’s what the first shot was. A macro of the first two letters of the word Opinel engraved in the blade, taken with my very ordinary kit lens, a EF-S 18-55mm set to its widest focal length! I only cropped the out-of-focus top and bottom a bit, but that’s basically full frame.

Of course, the first noticeable glitch is the incredibly narrow depth of field, to be expected. By mounting my lens in a reversed postion, I lost all electronics and hence control of my aperture (and depth of field). Mounting the 2 lenses one on another should help with this. Then focus isn’t really that sharp, because at this kind of magnification, the slightest vibration will make the image move. 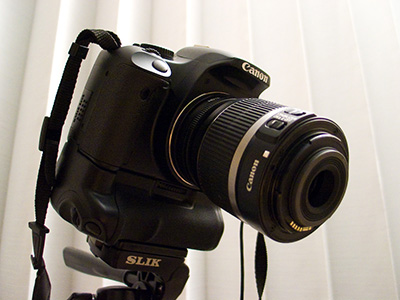 I was not using mirror lock and my remote cable was coiled very close to the camera, inducing slight trembling. In addition, with this kind of macro, focus is no longer set by using the lens’ ring but by varying the distance to the subject, which becomes incredibly difficult with a tripod-mounted camera…

But wow. This is quite amazing an improvement for a lens which normally has a 25 cm minimum focusing distance! And it cost less than $10! My kind of stuff! Next, I’ll be playing with the double lens setup and I will look into getting some kind of rail system to allow for easier focusing.

Oh and by the way: look at the first photo carefully, there’s a splendid optical illusion. Because of the sideways lighting I was using, the letters appear to be sticking out. They are in fact engraved, or recessed. I swear.