For Marie, who constantly reminds me how beautiful flowers can be.

This morning at 5:25 AM, I got up and prepared for a trip. I wasn’t going far and yet, I would explore a new universe. The objective was Stanley Park, my spaceship was a camera and for propulsion, I’d be tapping into macro theory.

It was my first outing ever with

Abetoo as a macro photography tool. We were both quite excited. Abetoo is my Canon 450D, in case you’re wondering if I’ve lost it. Granted, my current macro line of accessories consists of a single little black metal ring worth $10; it’s nothing to write home about but I will be expanding it over time. Bellows are on the way, and as soon as I can get my hand on a 58-39mm step down ring (anybody out there?), I’ll start using the Rodagon lens too.

Today, I was simply going to duplicate the previous setup and reverse-mount my Canon EF-S 18-55mm IS 1:3-5.6. I’d be using the silly little ring for that, and although I had no illusion on the initial quality of the images I’d capture, this was meant to be a field trip and first test. I needed to get a sense of how to juggle camera settings, deal with the extremely limited depth of field, compensate for the loss of auto-focus and aperture control, adapt Live View to my needs, gauge the possible combination of ISO and speeds, etc.

When I reached Beaver Lake, after a nice stroll and a cute encounter with a young raccoon that came to me and stood up on his back legs, opening his arms as 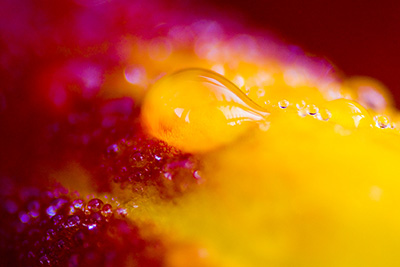 if to preach or beg for a hug, it was still dark. I turned my small LED flash light on and began searching for sleepy dragonflies. I found none. There was dew everywhere all right, but no bugs. This is late September and maybe the morning air still isn’t cold enough to keep insects numb long enough for me to arrive and shoot. I’ll have to investigate further.

But the dew was enough for me to begin my experiment. I setup the tripod as low as it would go and launched into an amazing new world. It was 6:30 AM. I was at it for the next 5 hours. There is no way to properly imagine the “infinitely small” before actually seeing it magnified on the LCD screen. For this alone, Canon’s new Live View function is priceless! Without it, I would have had to crouch down to the ground and attempt to peer through the viewfinder in very awkward positions.

I soon got a hang of it. Focus, for the time being, is achieved by slightly moving the whole camera/tripod assembly back and forth, or tilting the head, mere millimeters at a time. Very difficult but doable. My lens does not have an aperture setting ring – it’s all electronics as with most modern lenses – so if I just remove the lens and reverse it, it remains wide open as it usually is while metering. But I’ve found a neat trick on the internet that works like a charm: I set the aperture on-camera with the lens in its proper position, then before removing it I press and hold the Depth of Field Visualization button. Voila. The diaphragm stays at the preset value. This is invaluable 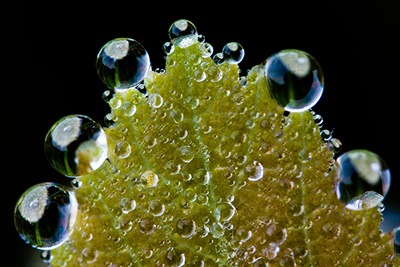 because it allows me to step down my f-stops and gain a little more depth of field.

In the end, the most challenging part of macro photography doesn’t seem to be as technical as it is visual. The problem for me is slowing down enough. I am used to composing my shots while walking around. But in the macro realm of nature, walking around equals to being blind, just as a UFO overflying the Earth would see nothing of our ridiculously selfish yet so passionate lives.

So this morning I would stop somewhere and drop to the ground, and stare for a while, letting my eyes glide over the plants and looking for details and dew drops and interesting light. I got it wrong most of the time, but once setup, the camera would invariably reveal attractive angles and cool textures I had completely missed. Many, many times, while looking at my screen, I felt like I was underwater looking at a coral reef. Other times, I was in space watching strange worlds with liquid planets orbiting yellow suns on a background of green and red nebulae.

The photos are pretty bad. I’m not even close to having mastered depth of field and focus. The slightest breeze sends flowers flying across the highly magnified frame and unless I step down to f-22 and use my highest ISO setting, tripod shots are tricky 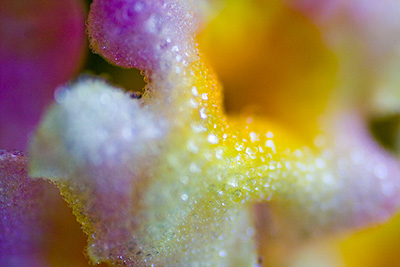 and hand-held’s are just about impossible. A lot of these are poorly framed and the in-focus range is incredibly narrow. But it’s a fascinating start and need I say I am completely hooked?

Any way, there were just too many shots that I liked so rather than posting them all here and linking to them via the usual slideshow, I’ve created a completely new gallery on the main web site, as part of an ongoing redesign which should be completed within a few months.

A word of warning: this is a Flash gallery. If you are among the 1% of web users who don’t have the Flash plugin installed, you will be given the option to do so. It’s your call. I think it’s worth it. Recent Flash versions feature the awesome Full Screen option, which I will integrate to the new site design. For now, make sure to check it out, there’s a full screen button on the lower-right corner of the gallery once it is open. It’s totally immersive! Enjoy!

2009 Update: the site has since undergone a full redesign and the macro gallery is now located here.