The Namaqualand Bloom, Part 5 – Luxing Out at Babylonstoren

Having disdainfully discarded the main artery option and instead opting for a rougher drive south on yet another isolated dirt road, we sliced our way through beautifully empty Karoo-like scenery, stacked landscape layers fading to the horizon like memories in a tired mind, losing sharpness as they grew distant. 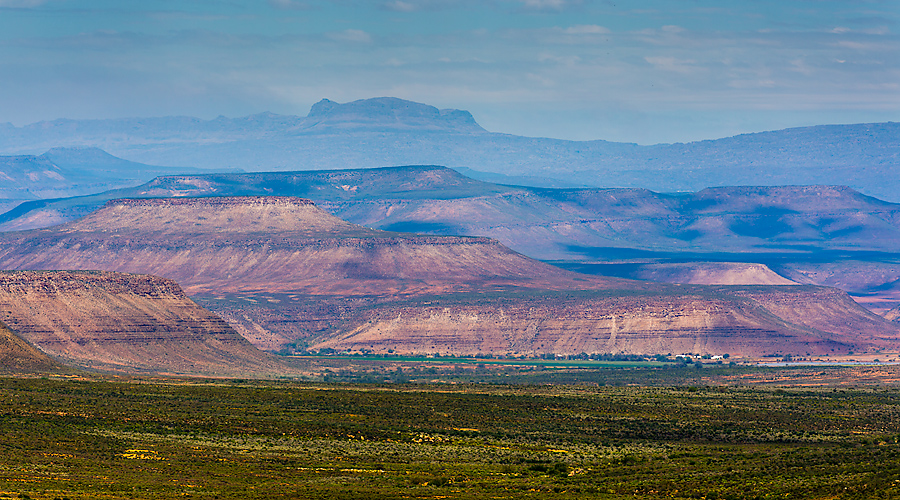 In Clanwilliam, we rejoined the busy N7 exactly at the point where major roadwork had impressed us on the way up. It did again. Of massive proportions, the project featured its own cement factory and a complete staff housing section on a hill next to the road. Traffic was alternating back and forth on a single lane and the automobile ballet was well coordinated, allowing us to cover the twenty or so kilometers in very decent time.

Let’s not be shy about it, South Africa is in trouble. After the fall of Apartheid and subsequent effervescent years under Mandela’s leadership when everything seemed possible, the country has slowly but irremediably slipped back down to a state of deep unrest and financial crisis. Racial segregation has been replaced by a financial divide that is as radical as the old system had been. The poor merely have gained the freedom to be so. A corrupt and incompetent government is crippling both politics and economics. The rand has collapsed to half of what it was worth when I first visited in 2008. The postal service is bankrupt, international mail reaching the country but not necessarily being delivered. A failing energy grid is crumbling under the country’s desperate thirst for power and rolling blackouts have been implemented Minds are freshly fed and eyes becoming selective in their survey of the land, acquiring targets with a touch more carenationwide to shed the load. Internet remains Third World class despite the arrival of a cross-ocean fiber optic cable and on-going efforts to upgrade local services. Crime is rampant and safety a serious issue. And most of all, oyster catchers, even though you see them everywhere, are endangered.

But this was hard to tell by gauging the ambitious road improvement project and once again, Africa was showing a multi-faceted personality. Going through Citrusdal, the extraordinary smell of orange blossom filled the air as orchards surrounded us for miles. Windows rolled down – well, I have not physically rolled a car’s windows down for a long time so I should simply say windows lowered – we grinned and inhaled like dogs on a ride.

The return from a road trip is always very different from the way out. Minds are freshly fed and eyes become selective in their survey of the land, acquiring targets with a touch more care. Introspection and replay take over the eager, almost frantic scan for novelty that had prevailed. Mixed feelings about going home appear. Home is where the heart is, of course, and where comfort awaits, along with the plethora of small habits that form our daily lives. But it also has a strong door which, while protecting us from the world’s inherent dangers, slams very hard inward, locking out adventure and freedom. 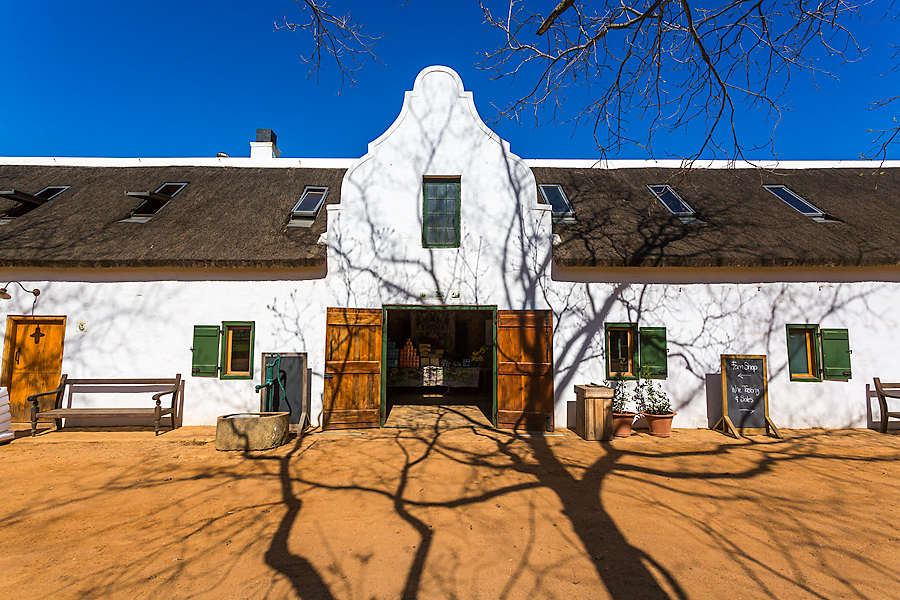 Our unlikely destination that day, closing the Namaqualand chapter uncharacteristically, was the Babylonstoren farm, near the town of Paarl, about an hour from Cape Town. This is the Stellenbosch region, cradle of the country’s wine making tradition. Paarl is sprawled at the foot of a lenticular-shaped mountain whose barren rock top looks like a pearl. It is one of the hottest places in South Africa, away from ocean breezes and under the influence of northern Karoo heat. Summer temperatures there often rise well above forty Celsius and life then, slows to a crawl.

In spring, however, the air was cool and fresh. We crossed town and headed for our destination. This grand finale was the lucky result of Marie having a contact on the inside as she had interviewed one of Babylonstoren gardeners the year before. She had later asked if they were offering press rates and we were graciously offered a night. 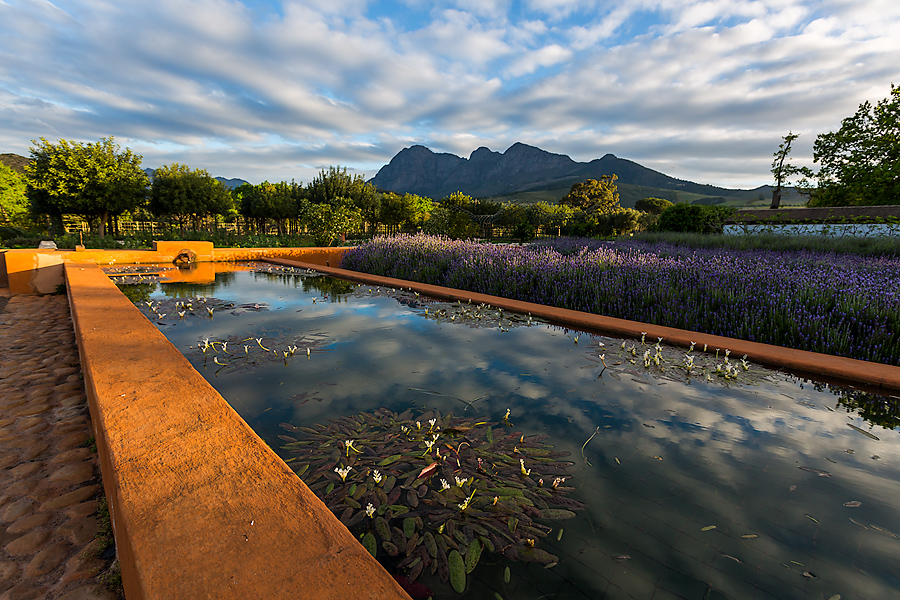 Babylonstoren is a very old Cape Dutch style farm that has managed to reinvent itself and now caters mostly to the hospitality industry, without having lost its charm. Its concept is more that of a resort than a farm as it features a hotel, a spa, restaurants, a garden, a vineyard, a cellar and a shop. The eight-acre garden grows 300 species of plants which are all edible, fruit and vegetables being harvested year-round and served in-house. You can imagine why Marie has always been drawn to this lovely place!

Having registered at the gate, we drove in through vineyards and found the parking lot closest to reception. There, we were welcomed and quickly turned over to a lad who drove us back to the Landcruiser in a golf cart to pickup our luggage. It would have been a thirty-second walk but we had now re-entered glamour land. Our host then drove another minute explaining some of the activities available – which Marie was quite familiar with and which we had no intention of taking part in as our stay was the briefest. He stopped in front of the first house of an grand alley framed by tall trees. Walls were blindingly white and the soil, as most everywhere on the farm, a pleasant rusty orange. 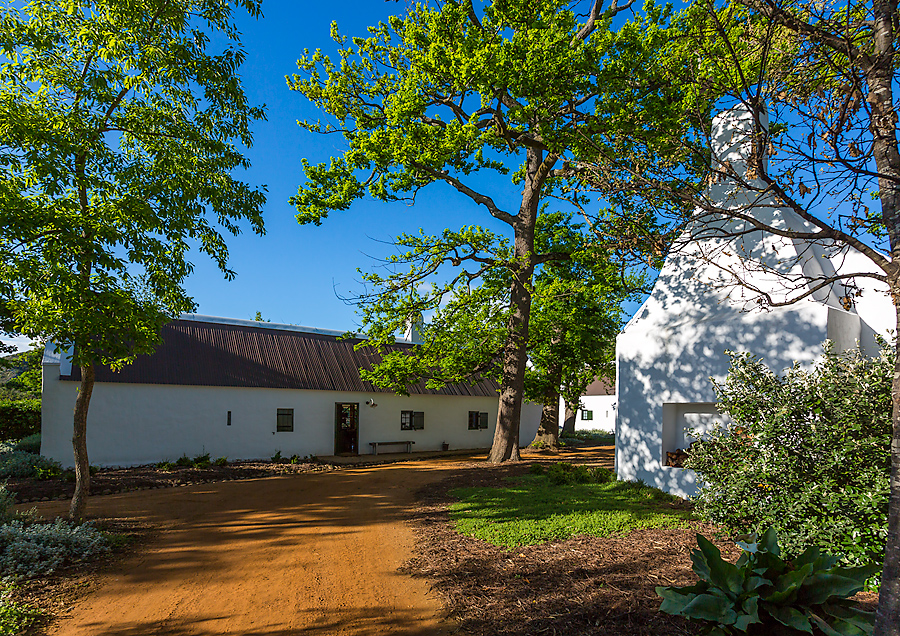 Directly ahead, our palace for a night – Babylonstoren

We were let in through a barn-style half-door and our jaws dropped inwardly while we tried to keep a confident, accustomed poker face. This was not a hotel room, it was a hotel palace, all to ourselves. The long, gorgeous Cape Dutch house had a large bedroom at each end, complete with yet again the largest bathrooms I had ever seen, a central room with a fireplace and enormously high ceilings, and jutting out at a right angle in the middle, a handy kitchen space opening into a large glass room, in a very pleasant contrast of old and new. 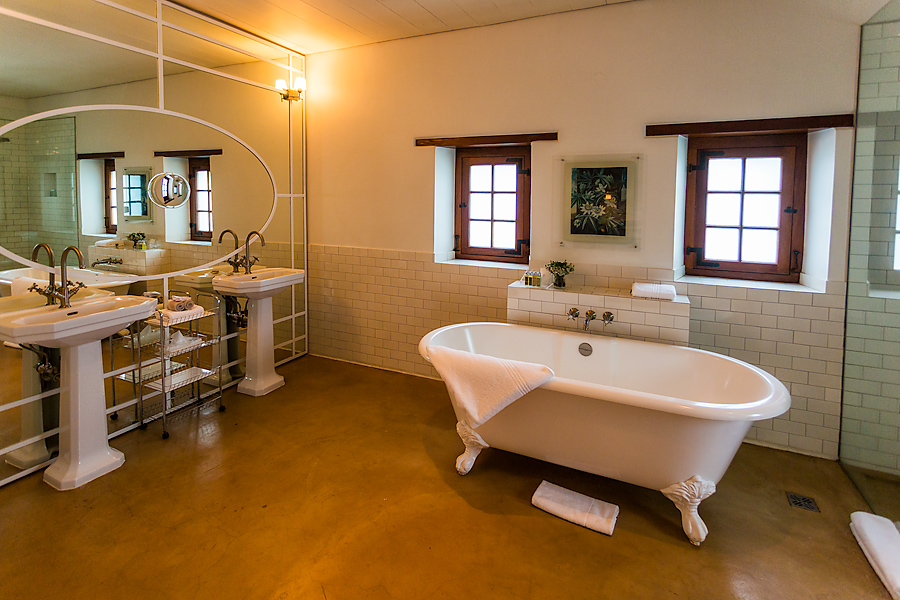 Now that’s what I call a bathroom, a bit bigger than our old Cobble Hill living room

A quick tour highlighted the main commodities – wi-fi, climate control, underfloor heating, fruit basket, complimentary tasting of local wine, dinner time, etc. I tipped customarily, pretending I was James Bond and keeping a knowing, self-assured and a-notch-above-blasé attitude, something in the lines of “Thank you, my friend, it will do.” Inwardly, I wanted to sing and do cartwheels. Luxury had been redeemed. For all we could see, we had been handed the keys to one of the finest roofs in the farm.

We unpacked quickly and ate a frugal snack as it was already mid-afternoon, then we flew out the door to go explore the garden. There were trees loaded with ripe fruit, a stunning path flanked with beds of orange clivias, an eye-pleasing bug hotel, a pétanque field, tortoises and ducks wandering around, donkeys showing off their latest offspring, a legion of chickens and turkeys, and water fountains and pools that reflected the sky and mountains through patches of idyllic waterblommetjies. Everything was clean, trimmed and raked, a sense of calm and zen-like balance oozing softly from all around us like a good coffee percolating to perfection.

Back at the rooms, we showered and dressed as smartly as our road trip packing allowed, and sat down in the main room as the light faded slowly, sipping a glass of wine. A polite knock on the door surprised us. Holding a small tray with appetizers, a hotel attendant was standing there at the ready and served us through the barn door. Having thanked him profusely, Marie and I looked at each other, eyes wide, and I think we must have said it at the same time: “I could get used to this!”

Basking in comfort before going out to dinner

Dinner was another surprise. Babylonstoren has a very good restaurant where Marie had eaten before and she had been looking forward to it, but we were directed to another building instead, where a wood oven was alight and cooks prepared pizza. It turned out that in low season the main restaurant does not open every night and dinners are shifted to the barn adjacent to the shop, its space as multi-purposeful as most of the farm itself. A long communal table had been setup and, arriving last, we had to squeeze in the middle, on opposite sides, flanked and instantly taking small-talk fire from both directions. There were four or five other couples and a solitary guy, mixture of locals and tourists, and ours being a small world, we laughed at finding out that the youngest pair were Brooklynites on their honeymoon.

Pizza was good and the conversation did not drop as low as it had on other nights, but we were happy to retreat to our rooms finally and lit a fire. I sighed. This was all going too fast. A single night and a short morning only separated us from conclusion. And then I remembered that what we were going back to in Cape Town was nearly almost as glamorous, and infinitely more repeatable. The second, deeper sigh came when my thoughts shifted to the following departure, a long red-eye, and a return to daily routine, “métro-boulot-dodo”*. 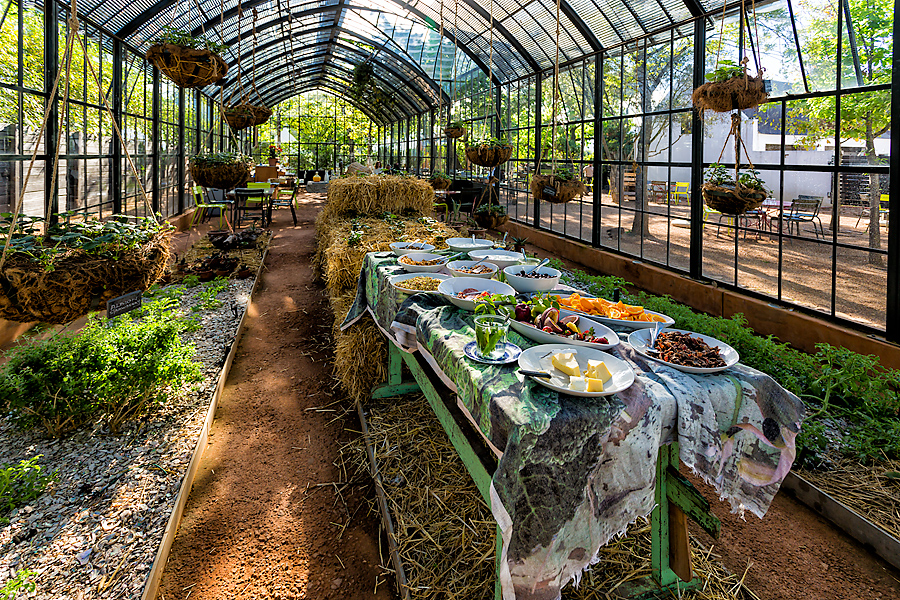 Breakfast in the greenhouse

In the morning, we walked through the garden to the breakfast area, staged inside a greenhouse. A table next to hay stacks held a variety of local fresh ingredients, fruit, cereal, oats, nuts, jams, butter, yogurt, cold meats and even biltong. On a second table, a sparrow seemed quite content eating crumbs on the bread board.

We then walked around some more, breathing in deeply to save the olfactory memories alongside the visual ones. Paying the store a visit, we bought a couple of cases of wine for Marie’s parents, the cellar sadly tending to be forgotten about these days. Then we hit the road one last time, a final dash out of there and back to here, reflecting on the epic luxury we were leaving behind with melancholy.

For people like us, luxury, I was reminded, is set on a timer. Once you start it, it will flow inexorably towards its own end, fast and slick, refusing to linger, so smooth and silky to the touch that it cannot be grabbed or held back, unaware of its own mortality, ephemeral. But then again, so are we.

* French expression about the daily grind, roughly translated into “commute-work-sleep”.