After many years, we finally find chameleons in the Constantia garden
Chameleons, South Africa

It’s a long love story. Back in 2008, upon my first visit to South Africa and after hearing from various Cape Town informants that elusive chameleons were possibly to be found nearby, I set out on a quest to seek out new life and new reptile civilization, to boldly go find what I had never found before. Unknown to me, I had begun the unlikely search for Meeleon.

After much staring at bushes under the quizzical looks of dog-walkers who could not understand why I seemingly ignored the two good looking corgis that accompanied me, patience paid out and I found a spot on the Constantia “green belt” where Cape dwarf chameleons, thinking they belonged there, figuring it made sense, had built themselves a fence, built themselves a home. I took many, many pictures, revisiting the few same trees on every trip.

They have never moved in eight years and I find them, my dear camouflage experts, regular as clockwork, through rain and shine, meeting with triumph and disaster and treating those two impostors just the same, I just know the chameleons will be there. I’m just not sure they are always the same or if new generations take over.

But until recently, a puzzle remained. The green belt is miles long and launches straight into Table Mountain. Why did I only repeatedly find them on the same very three or four short trees in an area of a few square meters? I had also searched our beloved Sun Valley Avenue garden, adjacent to the belt, so many times I had come to the sad conclusion the garden was a no chameleon’s land, maybe because of past kitties – or present birds.

Then earlier this year, Marie and I heard through the grapevine, a.k.a. Gmail, that Elliot the gardener has spotted one just outside the house! Sirens blared. Plans were sketched, photo gear cleaned and enthusiasm recharged.

Over the few weeks preceding our trip, we received a steady stream of sighting stories. Elliot, having struggled with the complex English pronunciation, had shortened the word “chameleon” down to “mee-lee-on”, and so a nickname was born. Excitement rose to its height.

Then the weather clouded over. Meeleon was missing. Marie had flown ahead of me and no one could find the shy animal. The last report came negative. That was on Thursday the eve of my flight. Anxiety was intense. I flew. Then Saturday, August the 13th, actually dawned. The sun got up, the clouds vanished, lenses were unfurled and the search began.

I did not get very far the first day, finding a few chameleons on the green belt in their usual spot but nothing in the garden. Jet lag plus a long sleepless flight drove me into taking a well deserved afternoon nap after the ritual welcome lunch, held inside in the sun-room rather than under the plane tree as this was still early spring, the air being chilly and the giant tree, pale and naked. 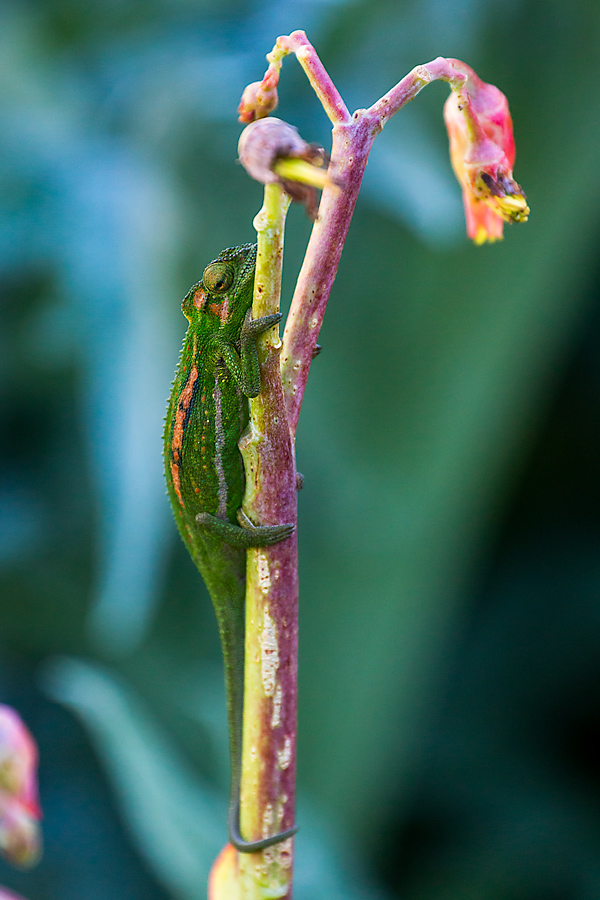 In the evening I decided to use a flashlight for my search, a trick that had been described as useful because the light would make stealthy animals stand out much better then in daylight where camouflage is at its best.

Well, I ended up discovering not one but five chameleons, three adults and two adorable babies. The one that stood closest to the spot where Eliott had found and lost his – the bush it lived on having been pruned – was automatically registered in the archives as none other than the great Meeleon. Finally, we could track individual specimens!

Night after night, and then in the daytime too, we found them over and over again. In hindsight, each animal appears to have a limited territory, its range probably affected by the size of the shrub they are on and how connected it is with surrounding vegetation. They seem to move around by no more than ten or fifteen feet in the luxuriant garden, and are often found on the very same branch or stalk they had been on previously, at the same time of day or night.

This is all very good news. It means the garden remains clean and pesticide-free. Maureen, its heart and soul, would not put anything bad in there of course, the garden is her baby; but who knows what happens nearby?

Our stay was maddeningly short. We made the best of it, spent a few days in the Karoo – I’ll post about that shortly along with the story of a moonlight encounter with a giraffe. Then it was seventeen painful hours on an Airbus and we came back to our wonderful but mosquito-infested little Brooklyn jungle. Funny, we could use insect-eating creatures here.

And so, sheepishly, I am already looking forward to my next Cape Town visit, and to seeking an old acquaintance that goes by the name of Meeleon.

Note: Some of you might have caught a series of quotes/plagiarisms in this post. What can I say? The mood is a bit silly and I felt like borrowing from classics…