After many years of absence, paragliding might finally make a come back
Airborne

Circumstances and life unfitting, it has been years since I flew my paraglider regularly. Oddly enough, it was my time in Little Cayman almost two decades ago that best allowed the escape freedom required to travel and fly. While the “rock” as we called our island was fever-inducing, the lifestyle was forgiving and I managed multiple vacations a year.

I learned the Art of paragliding in the French Alps near Chamonix and my first hops off a grassy slope were done facing the majestic Mont Blanc, roof of Europe. From a prairie flea, I then graduated to a status similar to that of a paper airplane; my flights were short, at times bizarre, and irremediably headed down.

Later, as senses were honed in little by little, each flight sharpening my instinct a touch further like the repetitive passes of a knife on the stone, I began to soar along ridges, back and forth, as the clocked ticked. At last, I could stretch my air time and push back the unavoidable pull of gravity and associated return to the Earth. Eventually, I met thermals that carried me, always a little higher, like as many horses their rider, some docile and forgiving, others impetuous and strong as bulls.

Multiple trips took me through the Alps, the South of France, the Pyrénées, Utah, California, Québec, the Dominican Republic and even, much later, South Africa. 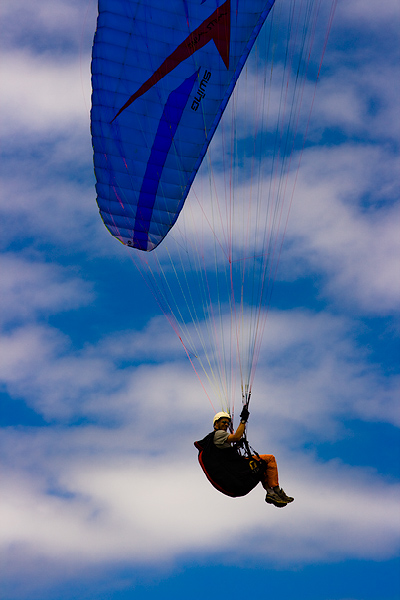 My Swing Arcus paraglider, purchased in 2002, is blue and white and red—like the French colors I like to think out of complete bias since it is of German origin. It has served me well and has been kept in great condition and inspected regularly. But its design is now far behind that of modern gliders. The fabric is sixteen years old and the wing aspires to a peaceful end. No longer does it crave the mad bite of a summer day’s thermals, nor the fierce embrace of strong winds on a cliff.

Still. With the appearance of Ntiniwe, our new lovely set of wheels born from German engineering and Mexican labor, new doors have opened and Northeast flying sites that were once a utopia now lie a few hours away.

So a while back, I decided to get back in the saddle, or rather the harness. I had kept my French license valid but acquired a US equivalent rating for more convenience. Suddenly, only weather forecasting actually stood between me and the sky. I went to a training hill and played with my paraglider on the ground, dutifully inflating the canopy but unable to keep it above my head for long in very low wind. I was rusty.

Then on an early summer Saturday recently, I headed out to re-acquaint myself with all things airborne. The location was Ellenville, NY, in the foothills of the Catskills. I had secured the mentor-ship of a very friendly local instructor.

We started the day early with a thorough site briefing. I have always enjoyed those, having myself given thousands of them in the old diving days and still missing the synergy that can arise between a good briefer and the briefees.

Watch out for the nasty rotor at the West launch when the wind is southerly. Be ready for surprises. Our triggers are here, there and over there. Do not soar when it’s thermic, push out. Remember the right of way. Plan your approach as if expecting trouble close to the ground, since there might be just that. Don’t land on the dark organic crop field left of the LZ, no matter what. Average out the windsock indications or pick one and hug it. Have fun. I’ll see you up there.

A couple of much needed sleds1 in the morning, before conditions picked up, allowed the muscle memories to slowly awaken.

Then around 4 PM, after midday fury had subsided a bit and thermals were better behaved, we launched again and this time, stronger westerly winds combined to enough thermal activity to let me stay up. 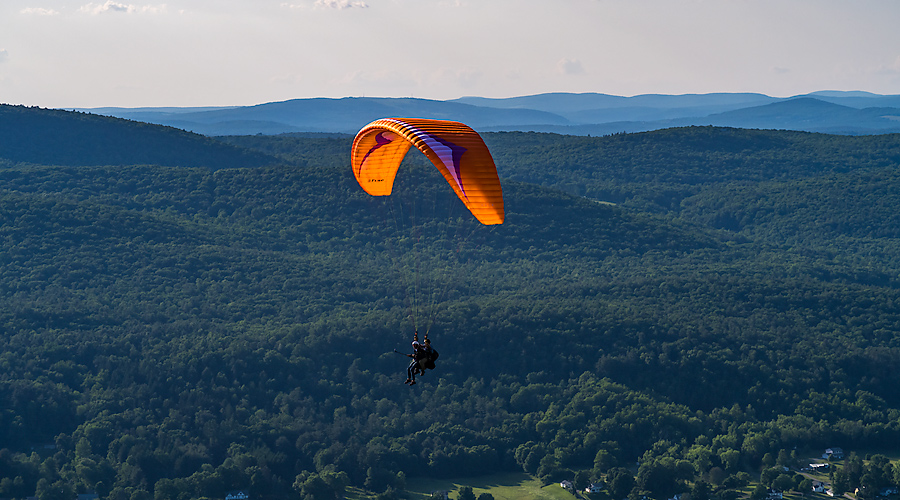 Paco flies tandem with a friend

It was a humbling yet exhilarating flight. Humbling because after so many years, and while deep inside some raw instinct remained, I once more had to get used to the wing and the air interacting like estranged lovers, and to my role as a mere bystander, almost a voyeur. I had loosened my chest strap from what it had previously been set to in order to get more feedback from the canopy and better weight-shift control but this meant a busier flight and many tugs right and left—the sort of signal that comes through as a light slap or maybe cold water on the face, for instant alertness.

Some paragliders are more talkative than others. My old Swing is rather placid and slices through the air without much frenzy with its wing span of almost forty feet. But a thermal is, by nature, a happening place. Hot air rises, surrounded by sinking colder air, and turbulence often prevails, especially on the edges where wind sheer is common.

So with my index fingers on the brake lines to better feel the wing, I let my senses tune into the moment and form a 3-D picture of the air bubble I was in while the audible vario beeped and moaned2. Whipping airspeed and sound, turbulence, asymmetrical reactions of the canopy tips, pressure on the brake lines and sideways tension in my seat into a lively sauce, I poured it as generously as I could on the dish of the day: staying up.

The wind was blowing straight into the hill and had picked up enough that at altitude, it almost countered my glider’s velocity and upwind ground speed was minimal. Circling in thermals, I would drift back along with them as I climbed, and I had set myself a conservative limit on how far behind the ridge I would accept to fall, depending on altitude, to always keep the landing field within the gliding distance of my modest glider.

The sky was littered with brightly colored specs of fabric and composite materials as paragliders, hang gliders and even sailplanes from a nearby aerodrome shared the ridge in a mesmerizing aerial ballet. I had been among the first to get airborne and I spent some time alone at the top while everyone worked the afternoon. Surprisingly, other paragliders were the first to reach me, conditions being a bit weak for hang gliders.

Mild thermals were triggering all along the ridge and instead of a main gaggle, we ended up climbing where we could, rather anarchically. For my first thermic flight in years, I was extremely grateful the aerology was well behaved. I kept in close contact with my wing, probably even more than I should have, and after what seemed like thirty or forty minutes, at around thirty-eight hundred feet above sea level, I suddenly felt tired. My arms were stiff, the leg I had kept ready to push on the speed bar was tense, and I decided to go land.

By then we did not have a complete glass off3 but there was weak lift at random, and combined with the wind, this made for a very slow descent, almost vertical at times. No big ears4 though, and eventually I was on final, still too high but refusing to drift much beyond the downwind edge of the vast and neatly mowed field that serves as an enormous LZ. I did a wide S pattern, stood up in the harness and landed a bit harder than I had hoped, the gradient having been substantial, but on my feet. Deep breath. Happy thoughts. A glance at the vario: a little over an hour in the air.

Stripping down from all my gear—gloves, helmet, vario, radio—I unstrapped my harness, kept my shades on and dug for my hat, then I disconnected from the canopy and folded it carefully but swiftly, sweat suddenly blinding my eyes.

The poor Arcus is dirty, having had a playful and eventful life. There is even a blood stain in a corner, from a thorny bush somewhere.

But things are set in motion and I will soon replace her with a brand new, better performing wing by the acclaimed Swiss brand Advance. Much magic is on the horizon and while it will have to be a slow and careful transition, I expect that we will form a great team. My eyes have turned skyward again.

Soon the sky will not be the limit.

1. A sled ride is a short flight from launch to LZ without hope of lift, typically done early in the day or on windless or in overcast conditions. The French call it “un plouf”, onomatopoeia for the sound of a stone in the pond.

2. The vario, or variometer, measures and displays vertical speed, reporting on sink or lift. Audio feedback is also available so that one doesn’t need to constantly look at the display. It beeps increasingly higher and faster as the climb rate increases and the sound in sinking air is a bit like twisting the little cow in a box of our childhood.

3. The expression means that smooth, reliable lift is everywhere along a ridge or mountains as the valley heat ascends into cooling air.

4. The big ears are a maneuver which consists in pulling down on the outermost lines to fold the wing tips in, effectively diminishing the wing’s surface and thus lowering lift and allowing for faster descent.