Those Were the Days…

The name was Banana Wind. I think the year was 2002. She was a thirty-five-foot dive boat custom-designed by a guy named Glenn Young in Mississippi who built fiberglass fishing boats. 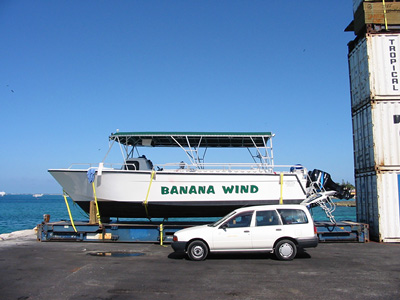 “Banana Wind” was a wink to Jimmy Buffet as both Danny, part owner of the resort and my old friend Marc who ran it, were unconditional Buffet fans. Our first boat, a large pontoon, had been called Havana Daydreaming and after careful debate, it had been decided to keep the tradition going. I didn’t really get it, but I knew it mattered to them.

Marc and I both spent time in Ocean Spring, Mississippi, eating shrimp and supervising construction and the fitting of our tank rack. I was also there for the first sea trials. Glenn and his crew launched from somewhere near Biloxi and we cruised along the bay, under a bridge and into the Gulf. The boat was bare, no canopy. She was fast. The GPS read thirty-two knots even before any fine-tuning. I called Marc in Little Cayman that night. “She’ll do,” I said with a smirk in my voice. He wasn’t fooled. He knew me too well and could feel my pulse racing through the line.

Banana Wind was then convoyed to Florida by road and shipped to Grand Cayman on a barge flat bed.

The day she arrived in George Town was a memorable one. Marc and I had flown in from Little Cayman and could barely wait. She was lifted by a crane off the barge and deposited on a dock where she sat for a while as we were dealing with administrative formalities, customs inspection and the gathering of supplies. Ken, the other part owner of our resort happened to own a rental condo on one of Grand Cayman’s North Sound canals, and we had established base camp there in utter luxury. 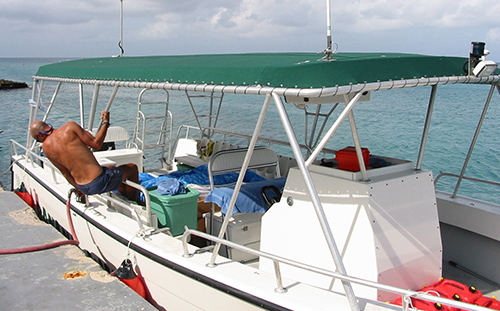 Fueling up for the crossing – Photo Marc Pothier

I fueled the huge tank up at the downtown harbor near the very southern end of Seven Mile Beach, then cruised north along the western end of the island while Marc was driving the rental car a few minutes back to the condo to meet me. He carried a handheld marine VHF radio, just in case. We had not yet become acquainted with the boat and her moods were unknown. I was quickly getting a hang of it, though.  She would get up on plane quickly and with the two Mercury 225 outboard engines trimmed up a bit, she flew like the wind.

I drove around the northern tip and back into the sound, careful to remain in the channel even though the boat had minimal draft. At the bottom of the sound I turned right into the canal and idled along fancy yachts to our section of the dock. The engines were mounted very close together and it made differential throttle steering a bit less efficient for tight maneuvering, but I was already in love. 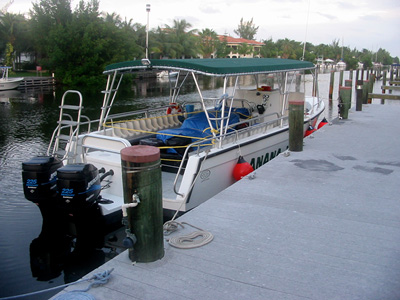 On a Grand Cayman canal, ready for the crossing to Little Cayman

We set out early morning for the crossing back to Little Cayman, a ninety statute mile eastward trip. The bow being wide open, a folding clear plastic screen had been installed across the beam just ahead of the helm. It could be snapped closed, effectively preventing access forward and offering a little protection from the spray. As we would soon find out, a crosswind and relatively modest seas would still soak us from head to toes in minutes. Such was the price to pay for an open design.

The crossing took a few hours as we were heavily loaded with fuel and supplies and had to deal with five to ten foot seas. Land was out of sight for most of the time and apart for the occasional overflight by a plane some six thousand feet above us, hopping between islands, we were alone on the ocean.

Marc and I took turns at the helm and eventually, the very low-lying silhouette of Little Cayman appeared on the horizon. Along with line-of-sight, radio communications were restored and we called ahead, hailing our base Paradise Divers on channel 16 before switching to our working channel for a report and ETA. It was amusing to think that every pair of ears near a VHF radio had probably followed us there to eavesdrop on the conversation. There is no radio privacy at sea and the news of our boat’s arrival had long turned island gossip.

Our previous dive boat, a forty-five-foot triple aluminum-hull pontoon, had long been mocked condescendingly by the Little Cayman diving community. Banana Wind was going to be our redemption. On calm waters, she was faster than any other dive boat out there. Rod, Marc and I would pick-up our divers and leave the dock a little later than everybody else—a feature popular with our guests who could sleep in—and still arrive on Bloody Bay Wall first and have our pick of dive sites. 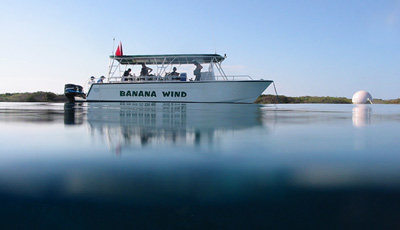 Rough days, however, were a different story. I had become the official skipper, mostly because I love driving boats, and probably also because I didn’t mind getting my hands dirty when small mechanical trouble called for it. Banana Wind was much lighter and shorter than the bigger diesel-powered Newtons and she rode the waves higher. This was both a strength and a curse. In following seas, as was the case when coming back in with a southeasterly wind, I had enough power and speed to ride a trough all the way through the cut and into the calmer South Sound. The Newtons were more sluggish and would threaten to broach as waves caught up and crashed on their stern. Their captains at times admitted mentally wetting their shorts coming back through the cut.

My nightmare was going out. With combined high winds and rough seas, the cut—a narrow channel across the barrier reef that protected the shallow South Sound—was blocked by seemingly impassible multiple lines of breaking waves, each one higher than the boat. 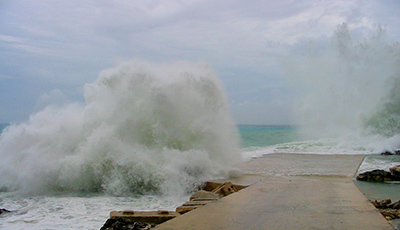 I often began studying wave sets from the dock, a half-kilometer away, while others loaded tanks and water. I would watch every larger dive boat go through like a tank charging forward and wished that for a change, ours had been a Newton too. Then when the time came, I would have to wait patiently just inside the cut, evaluating my chances, trying to time our exit right to place us in the cut exactly on the end of a set.

Once committed, I still had to slow us down to a halt every time we met a wave in order to avoid getting the boat airborne, and that wasted valuable seconds. By the time we got out, the next set would be building up and the final waves were often brutal. It was my turn to wet my shorts.

I sometimes miscalculated, or ran out of luck. An unexpected wave would roll in and crash over the bow, potentially sweeping the deck, knocking anybody who was standing off their feet and dragging unsecured gear overboard. So my rough weather briefing had become succinct: “Folks, we’re going to go through the cut now. Stow your gear. Make sure your tank is secured. Sit down. Hold on tight. If you want to wear your mask for the ride, do so. The spray will sting.”

But Banana Wind was sweet. She was our ticket to greatness. She was my raison de vivre. With her shallow draft and maneuverability, she allowed us to be the only operator doing night dives on the remote north side. I had a trusted route plotted on the GPS and could follow it in the darkest of nights. We left a bit after sunset as arriving too early meant darkness underwater would be incomplete and the transition between daytime and nighttime critters wouldn’t yet have happened, leaving the reef strangely deserted. But we also did not want to leave too late, as the day had already been long and dinner was calling.

Sometimes we got there and had to wait for a while for darkness to creep in. Other times we arrived in pitch black, and I followed the GPS route carefully, posting Rod or Marc on the bow with a dive light. The GPS would put me smack on top of the Mixing Bowl mooring, which eventually appeared magically in the spotlight. People cheered.

Those were the days.

Danny’s girls watch me welcome divers back.
Their dad, Danny, would always come up last.

Eventually, category 5 hurricane Ivan paid a dreadful visit to the Cayman Islands. We had anticipated trouble and taken our dive boat from her storm mooring, deep inside Kingston Bight on Little Cayman, across to a Grand Cayman boatyard where she was put up on stills.

It was fate. Had we not done so, the boat would have made it through the storm intact. But the blunt fury of Ivan missed the Sister Islands by a hair and hit Grand Cayman dead on instead.

Weeks later, we found Banana Wind washed up on a distant North Sound shore, her strong aluminum canopy gone, the engines trashed and the hull damaged. It was the saddest thing I have ever seen. We did eventually get her back in the water and fitted with new four-stroke Honda engines, but the canopy was missing and her scars never went away. She sailed again for some time, bravely taking us to our regular dive sites, but the magic was gone. She was suffering and the pain lingered. 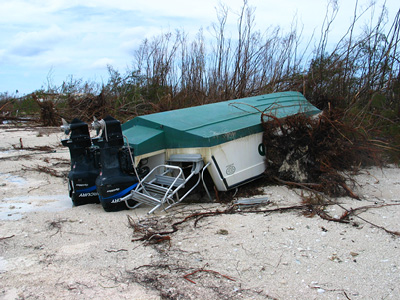 A few months after I left Little Cayman in 2005, Paradise Divers retired Banana Wind and she joined the old pontoon in Grand Cayman. Our resort’s diving was handed over to another dive operation. It was the end of an era. We had made the top of Rodale’s Scuba Diving People’s Awards for Best Operation and Best Staff Worldwide multiple times and I think Banana Wind had been the instrument to our glory.

I miss that boat every day. The New York subway just doesn’t rock the same way…

Those were the days, my friend
We thought they’d never end
We’d sing and dance forever and a day
We’d live the life we choose
We’d fight and never lose
For we were young and sure to have our way

Already reading sequentially?
Next story: Welcome to the Rock