Trail Running in the Southern Hemisphere

It’s called Table Mountain. It thrones over Cape Town like a king over his kingdom, or a queen over her lovers – high above, beautiful, strong, untouchable, feared and adored at the same time, killing remorselessly now and then, an icon.

The city of Cape Town has sprawled all around the mountain and nowhere in town can one ignore the presence of the imposing plateau. Many more pictures of it will follow, but today was trail running day and the Viljoen family happens to live right at the foot of the mountain in Constantia. So here are a few pictures of the run/hike, taken with Marie’s great little Canon that I carried in a pouch.

After getting up at 6:00 am and making coffee in the fantastic little Bialetti that has now become a must in my mornings, I dragged a very bravely willing Marie out of bed and into the car. She was dropping me off a little further down the mountain at the Constantia Neck (elev. 200 meters) so that I could follow the easy Hoerikwaggo hiking trail all the way up to Maclear’s Beacon, 1087 meters.

The weather was, as usual, stunning. Not a single cloud in the sky as far as the eye could see, except for some low fog-like banks somewhere near the ocean. The forecast was for a max. temperature of 34 degrees Celsius and I was glad to get an early start. Two bottles of water, two power bars, the camera, a photocopy of the map and a cell phone to call for a ride on my way back.

I started up the trail at 7:05 am after having taken my first energy boost. No, not a bar, a kiss. From Constantia Neck, the trail went up steeply for a while, until, having gained around 400 meters in elevation, I was finally able to break into a slow run. The initial part was mostly paved, the Jeep Road.

Then the first reservoir appeared on the left and right across from it, the only official water source of the trail. But I still had plenty and kept going. Expecting to follow the paved surface a little longer, I missed the turn towards the beacon and headed left to the next reservoirs, and had to backtrack when I realized the map could not have been that wrong. Having found the hiking path I wanted, I pushed on towards the north, crossing a succession of ravines.

Eventually, I had to venture a little off to the right and to the edge of the plateau to go take pictures of the house which I could clearly see way down below, next to the green belt where I normally run on. On the way back to the path, I took a shortcut which lead me into thick bushes and cost me another ten minutes.

Back on the trail, more ravines. I was systematically avoiding running up the steeper parts, unsure of how long I had to go and saving my energy. Finally, I could feel the landscape was changing and turning into one long upward slope. I knew I was nearing the beacon. A good thing. My legs were heavy and my heart pounding. I had to walk most of that last stretch, and then the wind picked up.

I emerged in the most extraordinary scenery; the beacon stood to my left, an enormous cairn built with stones. All around, fantastic views. Ocean, mountains, the sky, all competing for my attention. A little further, I could see the cable-car station on the Western Table, but I had decided to keep this first attempt reasonable.

I looked at my watch. Two hours flat from Constantia Neck. Exactly what I had hoped for. I’d be back way before my five hour deadline. I snapped a few pictures, almost chocked on a thick power bar I just couldn’t find the saliva to swallow, ate the other one, rested my legs horizontal for a few minutes, laced my shoes tighter for the descent, and after 15 minutes on the summit, threw myself into the trail and headed down in a slow, careful run. My ankles were doing well, so were the knees, but they were tired and I had to pay close attention to where I stepped.

I was back at the Neck in an hour and fifteen minutes; total trail time: 3:30 hours. I gave my chauffeur a call as I was descending the final steps to the parking lot, continuously splashing myself with the water I had picked up at the water source, extremelly relieved that the run was over because the heat was really kicking in.

Great run, great hike. The pictures barely pay it justice, they were taken quite fast and through rather heavy breathing. Oh well. Running is no time for HDR.

Then I had another energy boost. 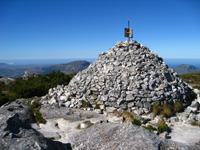 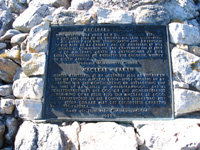 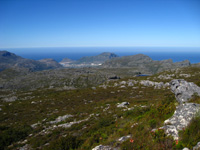 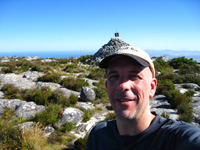