In 2008 while living in Vancouver, I started playing with macro photography. I could not afford good glass and wasn’t sure I was ready for it any way. So I experimented with all kinds of low-cost alternatives, most cumbersome and awkward, in various combinations of camera, tripod, focusing rails, bellows, extensions tubes, rings and reverse mounted lenses. The results, however, were fascinating. 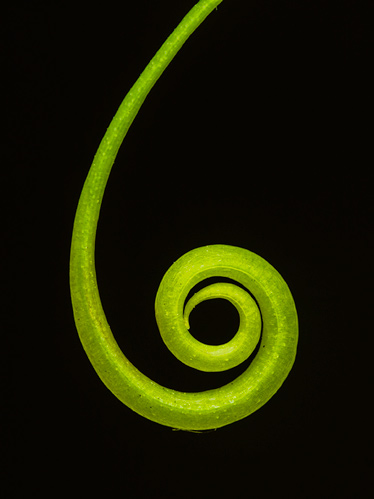 Perfect coil – The prehensile tip of a gloriosa lily

Macro photography revealed that beyond what our naked eyes can see without effort, exists a world of its own, a full-fledged universe of planets, vast oceans, gigantic trees, scary monsters and Co. I launched into that space like a ship on an interstellar journey, getting up before down and walking to the Stanley Park flower gardens on the stillest mornings, when all vegetation was covered in beautiful dew drops.

This wasn’t easy. The morning air had to be perfectly still as high magnification made even a sturdy tripod shake like a giraffe on a roller-coaster ride. My favorite setup, a mix of bellows and reversed lenses on rails, yielded, in addition to the loss of auto-focus and metering, a depth of field so narrow that the blade of a razor would have seemed dull in comparison. I used mirror lock and a remote cable to try and smooth the shots, and since I locked my reverse-mounted lens at the largest aperture to gain a few hundredths of a millimetre in depth of field, the LCD screen on which I composed and focused my shots was most often so dark I had to shine a bright flashlight on a subject to shoot it. 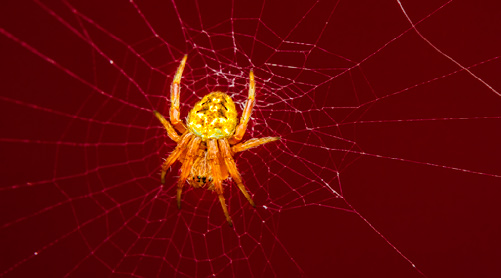 Unidentified arachnid against the red backdrop of our terrace

So when I moved to New York and nature recessed a notch, calm, still and rainy mornings giving way to a windier East Coast climate, my macro photography went on sabbatical. The gear was packed in a padded Pelican case and dropped at the bottom of a dark corner of our apartment.

Then only a few days ago, after a restless, sleepless night during which I had spent most of my time sliding in and out of a fuzzy, dream-induced photographic essay, I decided to get the Pelican out of the closet and play with my options.

There were so many different parts in that box that I managed to find combinations I had not attempted before – or maybe it was the fact that my main camera body had gone from the trusted Canon Rebel 450D to the even trustier Canon 7D. Either way, before I could even realize it, I had a new setup mounted and looking promising.

My old 18-55mm kit lens came first, mounted on the camera so that I would retain focus, stabilization and metering. Then came a coupling ring, 58mm down to 49mm. Then I reverse-mounted an old Pentax 50mm f/4 prime lens. I ran out to the grocery store and bought a few Styrofoam plates. Cutting a circular hole into one of them, I chopped the bottom half off and fitted it around the outer lens, as a flash diffuser. Then I stepped onto the terrace… 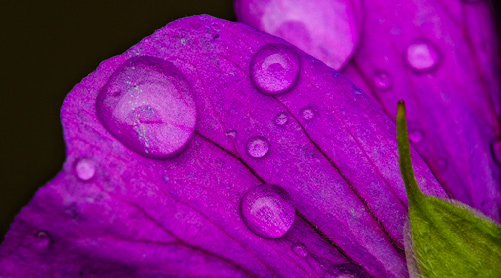 After the rain – Geranium “Rozanne”

The results of an initial test speak for themselves. All the pictures in here were taken with that setup a few days ago. Here’s the technical stuff:

While achieving slightly less magnification than I did before, I am still getting around 2:1, well beyond the 1:1 of typical dedicated macro lenses. I now have flash illumination which I never could figure out before. I am syncing the flash in Aperture Priority mode at 1/250th sec. and using a narrow aperture of f/22 to conserve depth of field, ISO set to Auto. The Pentax lens is wide open and my Canon lens zoomed to 55mm in order to minimize vignetting. And where before I had to sit the camera on a tripod, in still air, with a release, and still shoot the same picture 5 to 10 times to get it right once, the following were shot handheld, in the rather windy conditions and without thinking about it twice.

Keep in mind that the area captured on any of these images is roughly 10 millimeters wide, or about 1/3 of an inch. This means that the spider, for instance, is only 3 or 4 millimeters long in reality. The flowers on the picture below appear to be life-size, and yet they are barely visible to the naked eye. It’s always cool to be reminded of how the universe repeats itself on very different levels. 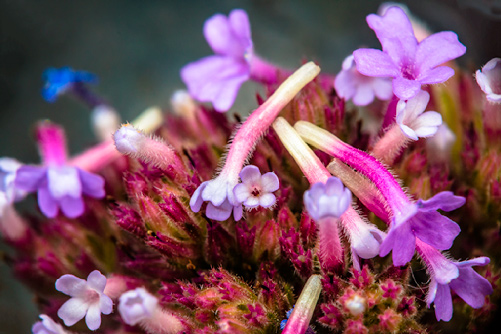 Yes, I had to run the Latin names by Marie. There will be more pictures. This was just a warm up, one scale down. 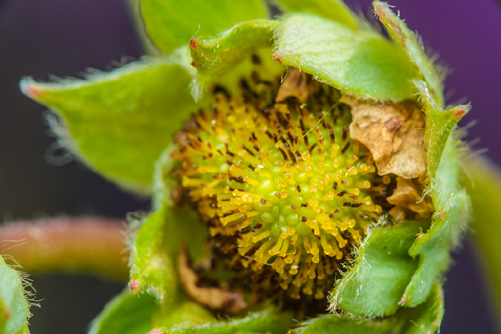 Strawberry, not ready for the fields 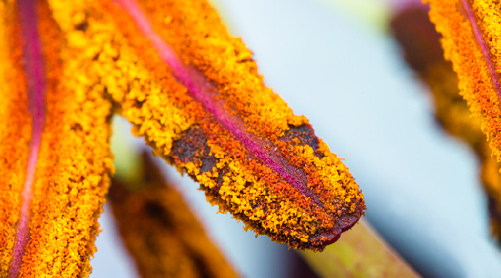