A weekend away from everything concrete
New York, On the road, Photoblogs

The Delaware River is born in the Catskills, two pristine mountain streams becoming the West and East branches that eventually merge just below the small town of Hancock, NY. The main river then swiftly flows south, flirting with the states of New York, Pennsylvania, New Jersey, Maryland and Delaware, on its way to Philadelphia and the nearby ocean.

Invited to spend last weekend by our friends Steve and Helen, we had booked a Zipcar for a couple of days and headed northwest along New Jersey’s Palisades, through the Hudson Highlands and into the very southern fringes of the Catskills. It was a Memorial Day long weekend and escape velocity was dampened by typical Friday exodus traffic. Once we broke free of the bubble, though, it was smooth sailing, our tiny Mazda 2 huffing and puffing through the hills like a dog chasing a ball on too short a set of legs.

Arriving in Hancock around 8:15 pm, we followed Google Maps directions to our destination, just below the point where the river’s two tributaries meet. The house was by the main road. I parked in a large driveway at the top of a path leading down to the river, a quarter of a mile away. Early summer evening light clung to the world and we stretched, taking in the scenery, thick woods and not another house in sight. 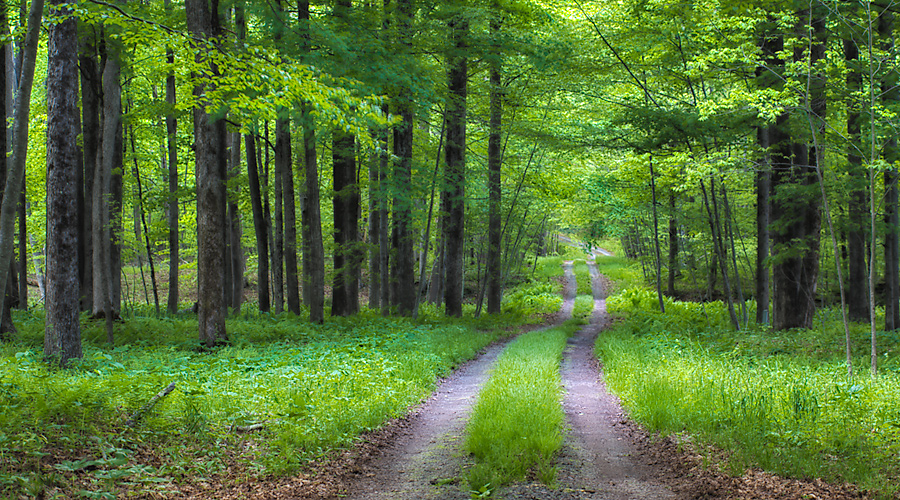 Chicken had been roasting and was served accompanied by delicious fresh morels. “I’ll show you the patch tomorrow,” said Steve with a twinkle in his eyes. We were now bound by an oath of secrecy. One can never reveal mushroom spots.

Our first night was a bit rough. Silence was overwhelmingly present, but every hour or so, a car would drive by on the main road and leave me slightly short of breath. A single engine a night in the middle of nowhere manages a stronger statement than a thousand sirens and honks ever will in a Harlem hour.

The following morning, we sipped coffee and walked around the premises, taking in the grass, flowers, moss and surrounding forest. It was bear country, and deer and ticks were common, too. Our lower legs became acutely self-aware.

Then Steve took us for a tour of the property. He has many acres and an amazing abundance of wild ramps, which he harvests and sells to local restaurants and markets, and sometimes as far as New York City. But that’s just the main attraction. He also manages to tap maples and makes his own syrup – which sweetened our coffee perfectly, picks garlic mustard, has wood nettles, an intimate orchard nursery on a parcel of clean sediment soil deposited by repetitive floods of the nearby river, and of course, the patch of morels.

Marie and he were walking ahead of me, pointing right and left and naming things, like I would have on a reef dive. I trailed and opened my eyes wide, smelling fresh air and the fragrance of many plants, listening to the whispers of nature and torturing my shutter.

Then we were on the patch. There were morels everywhere, we had to be watch our steps. I like morels almost as much as I like chanterelles. And that’s saying a lot. Some hobbit blood in me I guess. 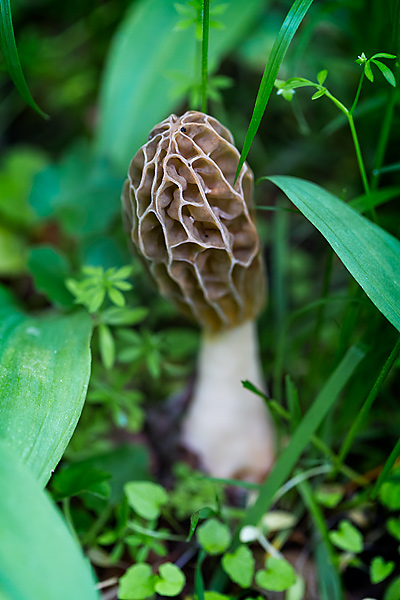 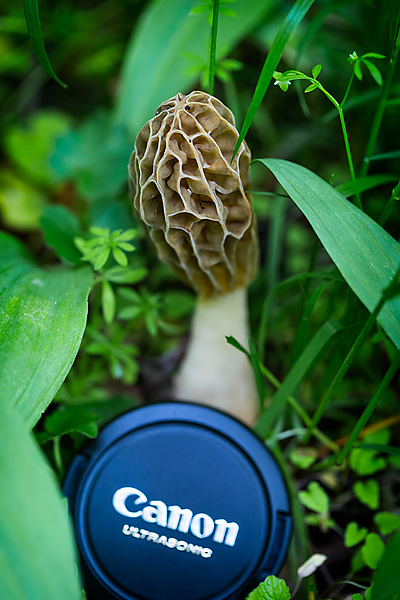 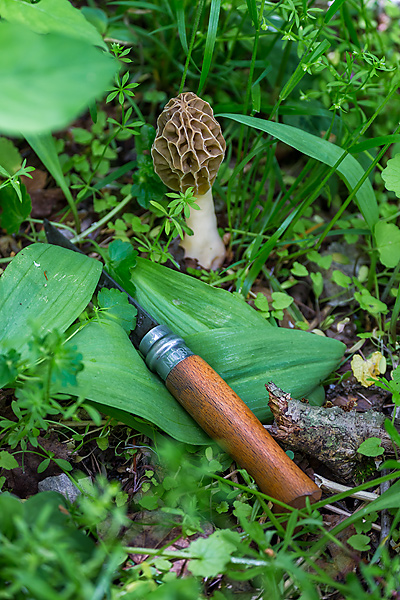 We picked some, left the smaller ones and searched on. A second smaller patch was eventually found, but brunch was calling. We headed back home and ate bagels with ramp cream cheese and an amazing salmon smoked by a local guy who also handles eels and trouts.

In late afternoon, Steve paid the river a visit for some fly fishing, but trouts [I now know the S is superfluous but I’m French, deal with it] were moody and ducked. Turkey vultures circled above the opposite bank and a bald eagle was standing guard far up on a ridge at the top of a dead tree.

Much cooking was happening in the house. Ten people had been invited for a foraging-themed supper. A mixed crowd of photographers and foragers started showing up, and cocktails were shaken.

Dinner came along with darkness. There were lovage syrup cocktails, smoked eel, pickled and roasted ramps, day lily tubers, a stinging nettle soup with ramp salt and pimento powder, quail eggs, a wood nettle, ramp, wild onion and garlic mustard tart, and beef and ramp kebabs. Marie being distracted by a riveting true story of running traplines for muskrats in Queens, the tart got an extra tan in the oven.

Some of the photographers in the group had seen the rise and fall of RM stock photography and conversations revolved around that prickly subject. Large cameras were compared and held against each other like cocks in a fight. Our egos followed mildly. Shutters were let loose, fingers focused and minds slightly blurry. The foragers spoke a bizarre plant language that didn’t help. A fun evening, bouquet vs bokeh.

The second night was better, our bodies instinctively remembering – and adjusting to – the bliss of silence.

A slow morning followed. Steve took us to a friend’s farm so that Marie could pick common milkweed in the cows’ pasture. The man was busy castrating three piglets with a razor blade. The little pigs’ hysteric screams drove the mother insane but she was locked out and could only watch. That meat we love so much, we were reminded, comes at a great cost of inhumane tradition. 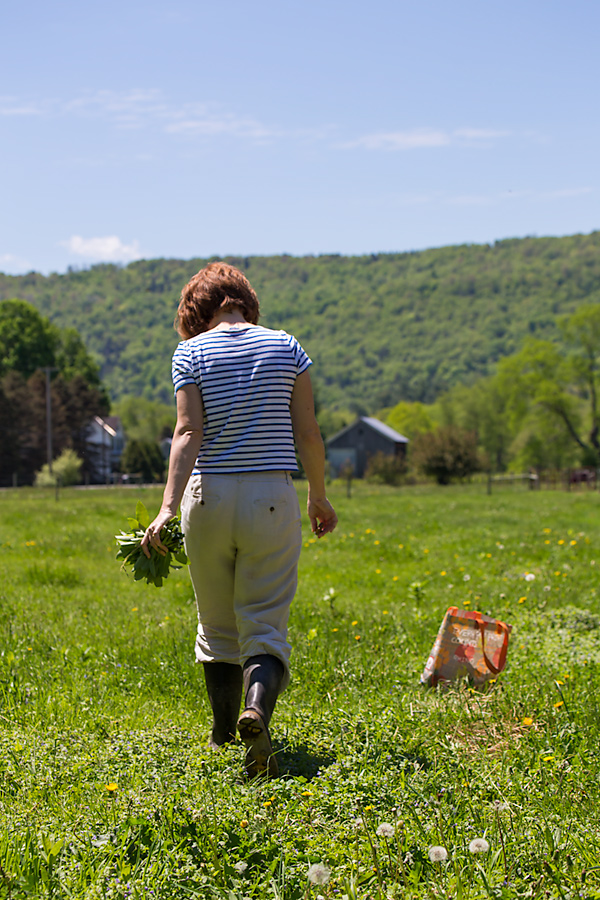 Picking milkweed at the farm

Even the farmer seemed disillusioned about it. He and Steve compared his technique to the rubber band, and he argued that maybe his was quicker, and more humane. “But then again,” he said shaking his head, “I don’t know if any of it is very humane after all…”

We stopped by the house to buy fresh eggs and since we didn’t have change, walked away with five dozens.

When all was said and done, Steve headed back into the woods to record a TV interview for a local channel and we paid our hosts farewell and hit the road, eventually crossing the Hudson higher this time over the Tappan Zee Bridge and entering the Bronx from the north.

Harlem was reached in time for supper and Marie made a delicious omelet with cheese and… yes, morels. Even the cat liked them.

Music was blasting in the streets and backyards. Sirens blared. Cars honked. We sighed and braced ourselves. Silence and nature had been but a fleeting balm on my cracked and painful mind.

The city can be as ruthless as a desert’s harshest sun.