Visiting Governors Island along with 10,000 friends

It was Sunday. We’d decided to have a picnic. Governors Island sounded like a decent choice because of its abundance of shade, free ferries, a blessed absence of cars and nice panoramic views of Manhattan.

When we left Brooklyn at 1:15 to catch the 2:00 PM ferry from the bottom tip of Manhattan, it all seemed possible. The F train, however, 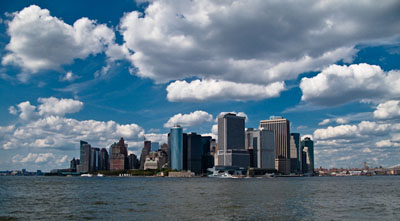 had other plans. Afflicted by a high week-end fever, if was avoiding our Bergen station altogether and forced us to negotiate a longer route and additional stopovers.

New York subway stations in the summer have much affinity with hell. Same heat, same hopelessness, same funny crowd. At least that’s what I gather from the stories I’ve heard. I haven’t been there.

We emerged from the subway, after much waiting and 3 transfers, 10 minutes too late. But never defeated, we headed towards the ferry terminal in case the web site had been misinformed about its own product. It had. There was an extra ferry leaving at 2:30. We lined up to be searched – this is New York after all and no one boards a free ferry for a 5 minute ride without opening their bag. Sadly, inside our bag was a small bottle of cider for the picnic. "Cider is like beer," the guy said. "You can go back outside and chug it or give it up." With a smile.

We did neither. Turning around, we picnicked in Battery Park instead, sandwiched between a mega family of noisy Venezuelans (¿Cómo está la vaina?) and a lazy Spiderman waving at kids without ever showing signs of intending to do anything entertaining. The cider was well worth standing up for, and lunch was delicious – left-over lamb in a sandwich and superb egg salad on crackers, flavoured with all kinds of herbs from the terrace.

And then we tried our ferry luck once more. The search was expedited and we were allowed inside the terminal to line up again as the boat was docking. A sign said that no more than 540 people were allowed on board and a pragmatic attendant commented casually that they had "done" 10,000 people the previous day. I had a cheerful thought about Indonesian ferries and brushed it off. If they can rescue airplane passengers off the Hudson River, fishing out ferry riders from the East River should be a breeze.

We boarded and sat on the upper deck in the sun, and waited for departure looking at the New York skyline and many helicopters buzzing around. The ride to Governors Island is more a hop than anything else. The ferry blows her horn as the Captain backs up, she turns around, heads out, crosses the wake of a few other ships and you’re there. Their docking technique is a bit mystifying but it seems to work. And then 540 people pour out onto the small island.

The first perfectly normal reaction of a visitor tackling insular 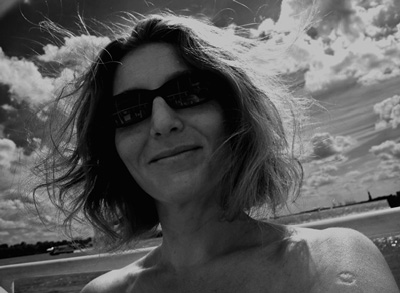 life is to seek the bathrooms. Then comes the first set back; on Governors Island, there are no proper bathrooms. Instead, they have plastic portable things they call royal flushes, without a trace of humour. On a construction site, maybe. In a park visited by 10,000 people daily, I don’t know…

So we walked around and took the usual tourist shots of Manhattan giving us its best profile, a Norwegian cruise ship headed to sea, many ferries zooming by and the gigantic post-super-Panamax gantry cranes over on the Brooklyn side. We also visited the Waterpod, a artistico-scientifico-socio-green project that strands 4 people on a barge and forces them to eat only whatever food they can grow on their own – so we’re talking veggies and veggies and veggies, chickens for the eggs, composting, recycling, and the occasional chicken Mc Nugget when they get fed up with proper etiquette. No, really, it’s cool. The French guy volunteering on board said with a ferocious smile that the chickens hadn’t been laying too many eggs since they were towed to this location and were exposed to the non-stop wave action of high-speed ferries.

We also walked the moat. This is a highly ritual activity that consists of entering, following and then exiting a grass covered trench between an old building and its surrounding fields, and imagining it water-filled and under siege. I think the Grand Canyon has very little to envy this moat.

But all good things must end and we had to get back in line to board our return ferry, already dreaming out loud of a shower and A/C coolness. And of washing our hands. The line was so long that we couldn’t even see the start of it. I went 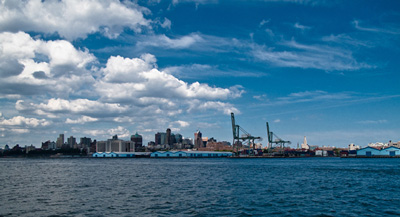 on a mission to buy water bottles. When I came back, things were looking much improved, the line had crept forward and, as it seems so frequent in New York, Marie had managed to run into her very good friends Mimi and Eric, also waiting to go back home. Assuming that another 10,000 people crossed over to the island on that day, what were the odds?

We were all herded on the ferry – and I mean literally herded since there were two lanes, one labeled goats and the other sheep. I swear.

Back in Manhattan, we opted for the R line as an experiment that worked rather well, dropping us off within walking distance of the Brooklyn stores we needed to restock for dinner, but that’s another wonderful story. All and all, 10,000 people isn’t that bad when one can hold a beloved hand. 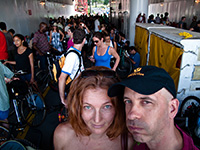