Back in Little Cayman, there was no fresh water source other than rain and reverse osmosis
Cayman Islands, Hydrosphere, ICMU, Vancouver

[Entry delayed in order to post the previous, time-sensitive one]

Last night the house’s plumbing went AWOL and having to spend 12 hours with no water triggered all kinds of memories.

It was almost two years ago now, yet it seems like yesterday. The place was Lighthouse condo #1,

West End of Little Cayman Island in the middle of the Caribbean. A particularly nasty previous hurricane season had left its scars, huge waves having battered down the shoreline and swept away the entire back porch. But worse, they had also shaken the house’s very foundations in which our fresh water cisterns were built. Entire walls were cracked and the water had started leaking out into the surrounding sand and limestone. On an island with no other fresh water supply then Evian bottles, the rain, and individual Reverse Osmosis units, that was more than a mere inconvenience.

With our small R.O. unit failing regularly, not enough rain on the forecast and damaged gutters that captured very little of it any way, there was a time when I ran out of water completely every few days. So I would climb down into the huge, dark and creepy cistern looking for new cracks, scaring away a few giant cockroaches and a couple of frogs.

Or I’d wake up in the middle of the night and would have to walk to the water’s edge with a bucket to fill the lines with salt water and attempt – usually unsuccessfully – to prime the water pump back to life.

The razor-sharp ironshore – no beaches on the rocky West End – would cut into my otherwise rugged bare feet as I negotiated my way from the house to the ocean a hundred feet away, under an extraordinary blanket of stars in a sky without the faintest trace of light pollution. 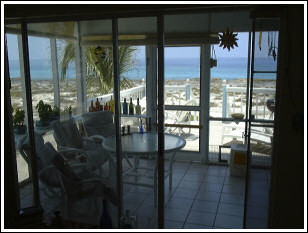 Not a single sound could be heard around but the waves gently dancing around. A twelve mile long island with a single road, no traffic lights, two stop signs and a hundred and fifty inhabitants isn’t very noisy at the peak of the day; the nights, for their part, were as quiet and peaceful as nature can be.

I would stand by the water with my bucket for a while, looking up at the friendly constellations, navigating my way from a cluster to another, sometimes granted a rare sight of the Southern Cross, or I would turn around and look back at the warm light glowing inside my place, as a lighthouse calling me in, and I would be perfectly happy in my crisis.

Then I’d fill the bucket and start back towards the light, step on a sharp broken conch shell aiming at me like spikes on a floating mine, swear in three languages and wish I was somewhere else, able to take a shower and wash the blood off my foot with fresh rather than sea water.

And here I am. Vancouver. Somewhere else.

The fresh water is pouring in endlessly from the sky – bucketfulls of it – and clogging my plumbing. Salt water has receded a few miles from the house and gotten much colder. The stars are different, too. But the adventure continues. I’ll miss this place, some day, just as much as I miss Little Cayman now.

So, preoccupied with the plumbing situation, I got up today at 6:00 am and went to work in a gloomy, rainy and dark morning, only to realize once there that I wasn’t working until 1:00 pm.