Welcome to the Rock

The Cayman Islands, a British Overseas Territory, sit by roughly 19º latitude north and 80º longitude west in the Caribbean Sea, tucked below the large landmass of Cuba and just to the west of Jamaica. Consisting of three islands, the country has a population of roughly fifty thousand souls, ninety percent of whom live in and around the capital of Georgetown on the main island, Grand Cayman.

The two other satellites, called the Sister Islands, lie eight miles to the east. Barely poking out of the water at the top of an underwater dorsal dropping straight down twenty-five thousand feet to the bottom of the Cayman Trench, they are small and almost identically shaped, about twelve miles long and a mile and a half wide in their center. Cayman Brac is the most populated with a little over a thousand inhabitants. It is flat on its western end but in the east, it ends in a sharp hundred and forty-foot high cliff called The Bluff.

Little Cayman, until now, has resisted growth and only claims around two hundred permanent residents, all of which are very fond of their home and usually a touch strange, too. Island life isn’t for everybody, and if the mythical fever does not strike soon after arrival to kick you off, you can assume you are “different”. And fit for the rock. 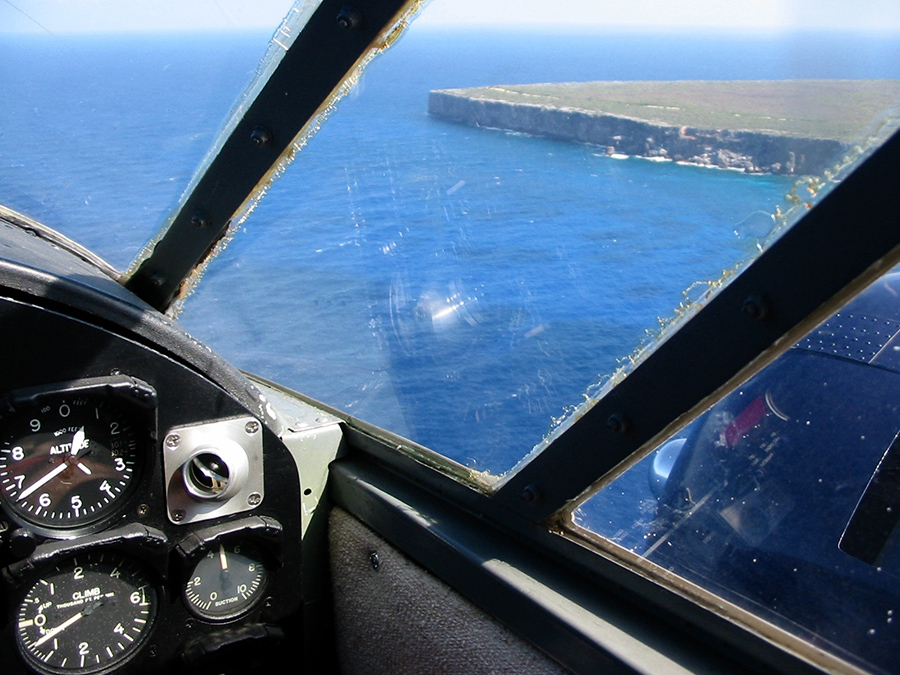 Flying around the Brac’s Bluff, West End, on a Beech 18 piloted by one of our guests

While Grand Cayman earned a reputation as an offshore banking paradise, the Sister Islands have remained very modest, even though completely different one from another. In the Brac, not much pleasure to be had. One works and survives. And one drinks, but that is common to all islands. There are only two major resorts, but an decent size modern airport. Locals, called Brackers, have an odd reputation. It has all been done, there, and crime is an issue. There was also the story of that guy pulling a chair into the middle of the road to await the return of his girlfriend after a fight, and getting run over by a car.

Little Cayman, on the other hand, is the white sheep of the family. She is unspoiled, quiet, mostly wild and all about fun. Six resorts make up most of the island’s civilized infrastructure. A single road circles it, not entirely paved. Electricity is provided by loud diesel generators located right next to the dump where wild chickens actually fly. There is no supply of fresh water and folk use cisterns and reverse osmosis plants. One public restaurant and the resorts’ in-house dinning constitute the only choices for eating out. 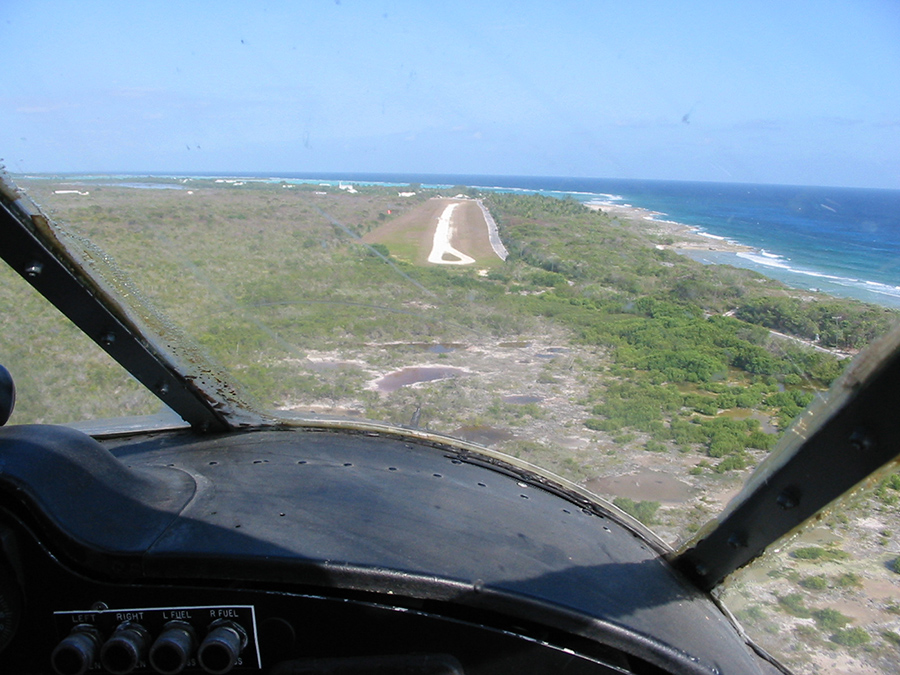 On final approach into the Little Cayman airstrip

Or, one can shop at the local grocery store, the size of a North American 7-Eleven, which also doubles as the hardware store, gas station, movie rental place and furniture and appliance depot. The bank outpost, not much larger than a common ATM booth, opens a few hours now and then, when its two staff members manage to fly in from the Brac branch.

Said flying in is done in Island Air’s small twins, island-hopping style. That ride takes seven minutes—the islands being within spitting distance of each other—and most planes do not bother climbing higher than a thousand feet to cross. In Little Cayman, the landing strip is a stretch of grass and dirt cleared from bushes over a gentle hill, so that pilots cannot see one end of the field from the other.

A short field take-off technique is in order there. Full power before releasing the brakes. More flaps than usual. Lift off early and then pick-up speed. And fingers crossed, because accelerate-stop distance is a luxury Little Cayman does not really have, unless a house can be considered to be proper stopping surface. On arrival, taxiing aircraft must cross the road to offload on the other side. It doesn’t matter, half of the island’s cars are already parked there waiting for the flight. There will be food on board, and supplies, and the mail, and many tourists which are greeted by their respective resort’s representatives in a completely informal way, often barefoot, always smiling.

It is said that the two very first cars to arrive on Little Cayman, many years ago, ran into each other. There are more vehicles, now, and yet no traffic lights, no pedestrian crossing signs, no notion of jaywalking, no parking problems, no rush hour. The island-wide speed limit is twenty-five miles per hour and there are a total of three stop signs. Iguanas have retained a legendary right of way and the largest specimens are almost half the width of a car. A lot of bicycles are used in Little Cayman, many of them supplied by the resorts as a courtesy to their guests. Resort employees circle the island daily in a pick-up truck to recover their bikes abandoned all around, usually at a bar after a late night.

One policeman was recently stationed on the island, along with a nurse. A doctor visits a couple of times weekly. There is now a very small jail, mostly to break up drunk fights but also because the proximity of Jamaica might escalate drug traffic—and then there is the very sad illegal immigration issue, but that will be another story. 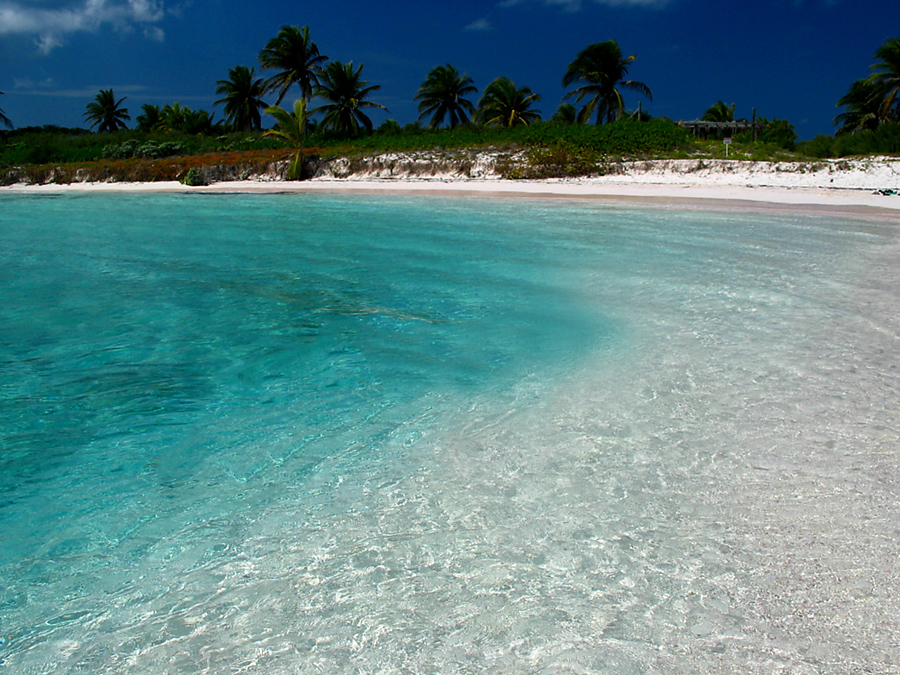 Little Cayman lives for and from scuba diving. Every resort offers it. Sitting on the edge of a trench, the island is surrounded by deep water and is famous for its wall dives. Very little shore diving is done because of the presence of a barrier reef along most of the iron-shore coastline. The resorts being located on the south shore, inside the mile-wide and very shallow South Sound, dive boats exit the sound through the only cut in the reef and round the western point to go dive world-famous Bloody Bay about a third of the way on the north side. It is an easy ride a stone’s throw from land that will take most dive boats thirty to sixty minutes depending on the conditions. We actually would do it in a third of that on Banana Wind. Wink.

But Little Cayman waters, as those of every other location in the Caribbean, are far from always being subdued. At best, they are spiced up by the dominant southeasterly trade winds, which usually blow ten to twenty knots and make for potentially rough seas and difficult rides. The worse happens during hurricane season, from June to November every year. Tropical storms are frequent. Hurricanes not so much, but they are terribly devastating. Everybody in the Cayman Islands will remember 2004’s Ivan for many years to come.

I’ll get to that.

Already reading sequentially?
Previous story: Those Were the Days…
Next story: The Search for Yellow Rose