Where the M.I.B. Hang Out

I’d initially wanted to go to Pelham Bay but a late start forced me to reconsider. Scrambling for options, I opted for a ride to the Flushing Meadows-Corona Park, a public space in Queens I had never been to and which had long ago hosted two World’s Fairs. It was a mistake.

The subway ride on a construction-crippled grid took forever with two transfers and a bus. I arrived late and was forced to shorten my visit. So I speed-walked through a long alley, past a dried up fountain featuring a gigantic hollow globe, to the famous towers where the Men In Black battled a giant bug, found surprisingly early cherry blossoms, and headed back. 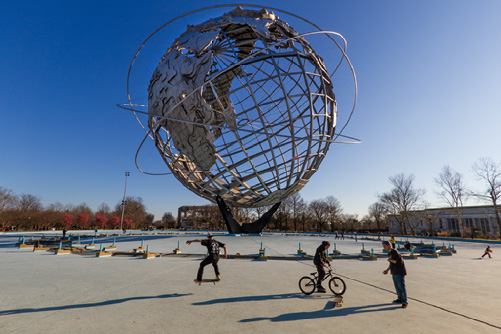 The park did not really impress me. Although I only saw a tiny portion of it, there appeared to be much open space and little vegetation. The crowd was a weekend one,  loud, playful, unhurried.

Here are the views.