Today I was invited to the Imax theatre at Canada Place for an advance screening of Giant Screen Films’ new Wild Ocean 3D, a documentary about the sardine run off the east coast of South Africa. It had been a long time since an large screen movie had blown me out of my seat. Granted, I’m not that hard to impress when it comes to giant screens, underwater footage and beautiful images. Yet my recent experiences were rather disappointing and this spring’s Dolphins and Whales 3D was a let down.

That all changed today. Wild Ocean 3D actually lived up to 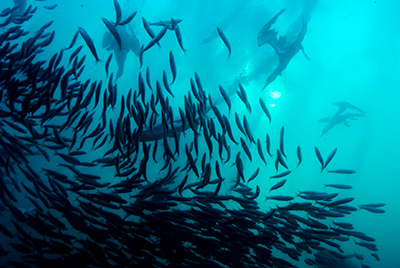 my all-time favourite Deep Sea 3D. While Deep Sea 3D featured amazing shots and near-perfect 3D technique, its narrative by Kate Winslet and Johnny Depp was quite cheesy. Wild Ocean fixed that. For a change, Giant Screen Films have produced a serious documentary, one with breathtaking images, a solid soundtrack and a well written narration that actually fits in and keeps you interested and involved.

Of course, I am biased. I love the ocean. And it so happens that I now love that part of the world too. But the images were really superb, both above and below the surface. They managed to keep the human element present by reflecting on the impact of such an important multi-species migration on the lives of local populations.

The movie obviously preaches towards the conservation of our oceans but does it in a much more subtle and intelligent way then other movies, and I find it refreshing to be shown beauty and then told to preserve it, rather than having my face shoved into the terrible abuse we inflict on our planet and then have a lecturing finger waved at me while a sermonizing voice says something like "Listen, you guilty fool. They are bad, we are bad, you are bad. Everything’s bad. It must change, or else. We are right about this being wrong. It’s all right to feel like we have gone wrong and it will soon be too late. Brace yourself. Run for cover. Stop eating food and breathing air. Each time you move an inch you hurt the planet." Etc. Your mind goes down in a spiral and you walk out of the theater more depressed than a penguin without water to swim in.

But Wild Ocean 3D only made me open my eyes very wide, it made my heart travel half-way across the globe, it made me want to see our world, to explore it, above and below, and to protect it by being wise, rather than by panicking.