On December 20th, 2009, Marie and I set out on a holiday trip to the Frenchie side of the family. These were my second and third rides on Amtrak’s 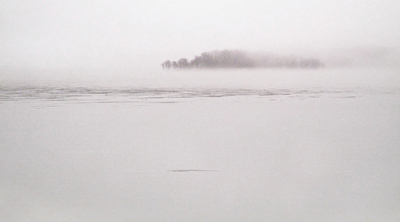 Adirondack train between New York’s Penn Station and Montreal – and return. Catching that train the morning of NYC’s first snowfall of the season was a bit of a mixed blessing.

On the one hand, we got to experience Penn Station’s uniquely unfriendly waiting area and had to share it with hundreds and hundreds of other anxious travelers while trains were delayed one after another or plain and simply canceled. The arrival-departure panels reflected our city’s lack of extreme weather preparedness. The station was operating with a skeleton crew and trains were still buried in snow at the yard. By luck, our train to Montreal only left an hour late.

On the other hand, we were granted an exceptionally scenic ride up north, rivers and lakes having partially frozen and blending eerily into immense snow fields and a low overcast winter sky. This trip had nothing to do with my previous – rather boring – summer ride, and the return would be even more stunning.

On the northbound leg, winter had dusted the world with snow 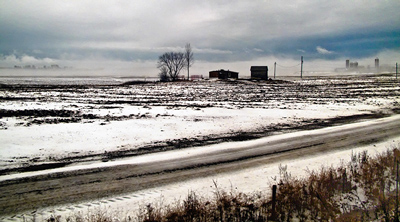 and our eyes got pulled softly in all directions, towards the Hudson River to the west early on, then in a voyeuristic way into rural areas and small, idling towns, and later towards the long narrow water corridor that would turn into Lake Champlain and wide open ice.

The Adirondack train wound its way along the western banks, perched right up against the shore, our conductor mellowing the charge of his engine, negotiating the single track’s dizzying series of tight bends and blowing the horn unrelentingly.

At some point along the way, our train having arrived first at a designated location, we momentarily stopped on a side track to let the southbound train pass by. It’s the only place they can do so along the lake.

Six cars long, the train includes a cafe car aboard which people can purchase a light snack and coffee or beer, an easy excuse for regularly stretching one’s legs on the 11 hour long trip. The car’s wide open four-seat dining tables offer ample

space for home-made picnics and a bottle of wine, and we certainly had come prepared. They’re also perfect for serious work and while each and every individual reclining seat is equipped with power outlets, the cafe car allows one to spread a computer, notepad, book, coffee, music player and any other necessary tools with ease and in grand comfort.

There are around 15 stops along the way, the longest of which being the border crossing at Rouses Point, the Champlain outpost. The cafe car is then closed, passengers restricted to their seats and Customs officers climb aboard to check passports and travel documents. Unavoidably, a few people get pulled aside for further investigation because their travel situation is complicated, or irregular, delaying 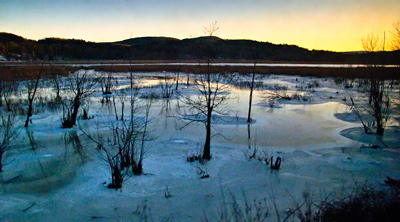 the whole train. The Canadians take the poor chosen few outside to their office, along with all luggage, while in the other direction US officers establish much more efficient field headquarters in the cafe car and do their business in the train’s numbing heat.

My dear sister Gitte and her son Yann were patiently waiting for us at Montreal’s Gare centrale and took us back to Beloeil where mom was herding 4 cats to spend Christmas en famille. A few Quebec pictures will follow in a later post. It was sweet and fun.

Our train ride back to New York was even more spectacular. 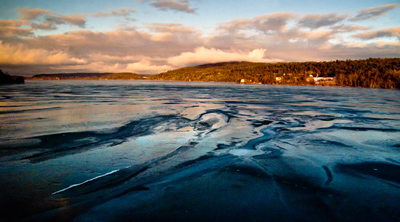 The weather was all over the place, hectic and confused, serving us a strange mixture of rain, snow, fog, sunshine and everything in between.

Rarefied winter vegetation meant unrestricted view of the rapidly changing scenery and while the pictures are incredibly low quality and grainy, having been shot at high ISO through the very dirty windows of a fast moving train, they remain almost as moody as the ride itself.

I love the train!

“I wish I was the brakeman
On a hurtlin’ fevered train
Crashing a-headlong into the heartland
Like a cannon in the rain
With the beating of the sleepers
And the burnin’ of the coal
Counting the towns flashing by
In a night that’s full of soul
With light in my head
You in my arms
Woohoo!”