Yet another escape towards the Catskills yields peace and beauty
Always, New York, Photoblogs

So time has passed but the flame burns hot. Recently, a small celebration was in order after seven years of blaze. They decided to get out of the Big Apple for the allotted two days of a city-slave weekend. He rented, through a phone app, bits back and forth and no human contact, a Zipcar. Dwelling two blocks away in a dark multilevel parking lot, it was a red Jetta called Iberra. These have names, like pets.

Weekend unarguably including a night, accommodation was required. He booked an old short-lived nest of theirs, many years abandoned, in the funky, ex-hippie town of Woodstock in the Catskills. The day before they hit the road, a winter storm warning was issued by edgy authorities and with some ninety miles to go, he pondered the wisdom of such enterprise. But with morning came relief as the storm was late and weakening, like an eager traveler who has already spent all his money and energy and begins to lag, weary, seeking a quiet place to lay and nap.

The road north was pleasant, Iberra purred nicely and snow, albeit thin and light, blanketed the countryside with perfection.

In Woodstock, the nest was waiting, warm and eggless (a plus, sometimes) and smell-free roses had arrived from a fridge somewhere. One cannot be too picky in the heart of winter. They stared at the electric fireplace with a mixture of amazement and shame, its cold coals glowing like a slow heartbeat. Again, no smell, no heat, no risk. Sterile and safe, as the twenty-first century is meant to be. Still. Hypnotizing. They were thrilled to be there and minutes of absolute silence took on a measure of eternity, almost shocking in their simplicity.

A table was booked at the nearby Red Onion and darkness having fallen, they drove a few more minutes through un brouillard à couper au couteau (fog so thick you’d need a dagger to cut through it). Dinner is fuzzy but was merry, the room warm and a bit too noisy, lights half-dimmed, the staff busy. The wait was proportional to the remoteness. Eventually a heap of salad and mussels on a skillet materialized. All around, mostly locals. Her radar could not help but to follow the conversation of those who, it seemed, had seen the golden years of the small town. 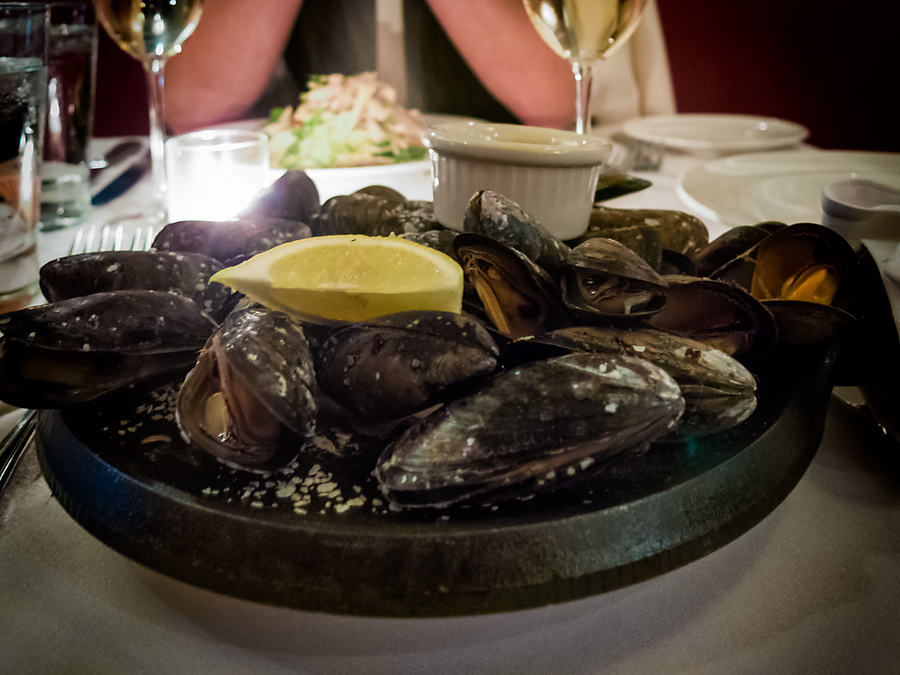 At the fuzzy Red Onion

Later, sleep was deep, the night still and impeccably void of any noise. In the morning, a breakfast of bagels, smoked salmon and unfortunately bad coffee set them on their way back home, with a ritual detour over Peekamoose Road to the prettiest mountain stream in the whole Northeast. Tickled that they had now seen that spot in four seasons, they drove through the entire mountain pass and back, later aiming for Kingtson where a butcher had once supplied delightful chicken wings.

They stopped at one of the freshwater reservoir supplying NYC with drinking water. Frozen solid. But yes, New Yorkers also need ice cubes for their drinks.

The butcher shop was open but deserted. No wings, said the butcheress, this is slow season, they would not sell. There was a strong gas smell floating around and they inquired. The problem is next door, she explained. They bailed before it crossed over.

Driving home with a dread of noise and stress to come, they sighed. There would be no feline presence to offset the crush of Harlem. But like superheroes, fist forward and cape in the wind, against all odds, they rushed once more into a maelstrom of grey Kryptonite called New York City.

She has many more pictures here.