Woodward’s end: just another brick off the wall

Saturday morning at precisely 8:30, the remaining three sections of the half-demolished Woodward’s building came down in a synchronized implosion. Nine blocks had been placed off limits to traffic and a crowd was watching the blast from every street corner in range as well as the roof of all nearby buildings.

It beats me why they have slowly been working at demolition with tweezers for the entire summer to finally just blow the whole thing apart, but it made for a nice show and covered the neighborhood in dust.

Woodward’s was part of Vancouver’s heritage, having been a large popular department store a few generations shopped at. The oldest corner of the building will remain as it is and will be included in the rebuilding of the new mixed-used complex which will include a 40 storey residential tower. O tempora, o mores!

The bricks of the demolished sections have been individually sold away for a good cause. Not quite Berlin Wall bricks, but hey, at least they’re not blood stained…

[The shots are bad. The camera was handheld at arm’s length above a crowd, through a window, in low light and with no time to think…] 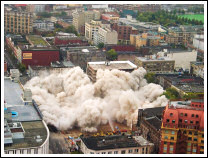 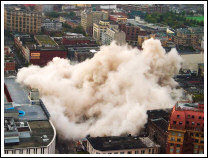