One of the major factors helping so many people to finish such a long and difficult race is the crowds. All along the route, there are spectators cheering the riders. In some places things are taken to an extreme and people have loud music playing, or even improvised bands. There are spontaneous cheerleaders and amateur water points. There are hoses pointed at cyclists for cooling off. There are local kids offering a “push” up steeper hills. Everybody is clapping and encouraging. Some seem amazed and others even have a look of deep sorrow on their faces, as if thinking “What pain, how can you martyrs endure that?”

All of this is very helpful when the going gets tough and while I couldn’t do much for my legs other than slow down for a while, I boosted my ego with smiles and you can do its and found it much easier to pedal efficiently to the loud beat of Eye of the Tiger.

There were also many official refreshment stations along the course but I tried to avoid them for fear of losing my rhythm. That might have been a mistake. At the bottom of the road out of Simon’s Town towards the top of Smitswinkel Bay, second major climb of the route, my left quad tightened dangerously and I had to stop for a minute to stretch. I kept singing to myself in Dory’s fishy voice: “Keep going, going, going…”

Climbs, however, were where I could more or less keep up with the pack. Bunches tended to disintegrate and everyone slowed down to acceptable individual comfort, or rather pain levels. The mountain bike was then at ease and I never once had to stand up from the saddle. The pleasant thing about the Smitswinkel Bay climb is that a typical southeaster usually abates just before the final stretch and even becomes a tailwind, a blessing all and all even though it also suddenly becomes much hotter.

The local troop of Chacma baboons was also on site and a few were sucking happily on discarded energy gel packs.The top of that second climb marks the psychological half-way point of the Tour. Over 60 km remain but there is a sharp direction change towards the north and riders enjoy a fantastic extended downhill ride to recover. So I sat back in the saddle after reaching my modest top speed and watched everyone rush past me once again. I wondered how my teammate was doing and whether he was ahead or behind me.

At Misty Cliffs, with some 50 km to go, things improved for a while. Out of any tall trees’ protection, we finally felt the tailwind, a very welcome little extra push in our tired backs. The local troop of Chacma baboons was also on site and a few were sucking happily on discarded energy gel packs. There was a moderate climb above Kommetjie and then the long hot straight line towards Noordhoek with what felt like a strong crosswind, or even a bit of headwind again.

The next challenge was Chapman’s Peak Drive, third steep climb of the course. I decided to do my single stop just at the bottom, to replenish my two bottles and briefly rest my legs before climbing. The Drive has the most stunning views of crashing waves down below and far into Hout Bay, however by then I was having to dedicate full attention to my breathing, to pampering my derailleur, to the tired riders around me and the sharp bends.

Chappies, as the locals call it, wasn’t so bad, except for maybe the last 200 meters where I’d really had it and began experimenting with my French swearing repertoire. But I skipped the refreshments station at the top, banking on the long descent into Hout Bay to perk up.

After Hout Bay, there isn’t much rest until the next and final climb, Suikerbossie – a long, straight and sizzling hot road which is where many meet their Waterloo. You get there with about 90 km in your legs and the climb hits you hard. However, it also has one of the highest spectator/supporter concentration and many garden hoses appear, aimed at the road, held by kind souls who politely ask you if you want a splash as you go by. The crowd is roaring, music plays loud, and riders suffer together, in a contrasting silence, sharing pain and hopes. Many give up, though, and walk their bike up the hill. You try not to look at them and be tempted, keep your eyes on the road ahead, avoid the swirling guy next to you and aim for another 20 pedal turns. And then another. Suikerbossie, it seems, will never end.

But it does. Reaching the top, I took a deep panting breath. The suffering was over. “After Sugarbush,” had said Henri, “it’s all downhill”. He hadn’t counted on the wind. With 15 km to go and running on empty, I was thrown, along with I had finished the Argus. 110 km. Two wheels.everyone else, into Eole’s fury. Here’s what sport Columnist Kevin McCallum wrote about that stretch of the 2010 Tour: “The wind was a funny, vicious beast, bouncing off the cliffs and slowing you from 50km/h to 20km/h in the space of a corner…”

But the end was at last in sight, or rather around the corner and out of sight. All that remained was a slow dash through Camps Bay, rounding Lion’s Head, into Sea point and finally Greenpoint. My neck had been cramping for hours already and forced me to stretch it every 30 seconds, looking down at my pedals and losing precious sight of the road. Wrists were hurting and I had to alternatively shake them wildly. My butt was so sore it was finally getting numb. But standing up on the pedals felt like heaven on a bike.

Then the road narrowed, riders being channeled into the finish line, two guys in front of me suddenly slowed down to lift up their arms in victory, I passed them on the left because I didn’t give a damn, there was a blurred camera pointed at us, the blue arch flashed by, I felt the slight bump of the final mat, and that was it.

I had finished the Argus. 110 km. Two wheels. A helluva lot of wind. Quite a show. Pain. Relief. I looked down at my timer: 5 hours and 20 minutes. To quote Lafontaine, je jurai, mais un peu tard, qu’on ne m’y prendrait plus.

I got off the bike, carefully – a collapse after the finish line would not have been that glamorous, took a few hesitant steps, life coming back to my legs in spikes of nervous conflict, and grabbed a cold Coke before exiting the arrival pen. I think that was the most satisfying Coke I’ve ever had. It was hot. Some people looked pooped, others quite casual. Many were arranging pick-ups on their cell phones, or maybe just reporting being alive. I looked around hopelessly for Henri and then proceeded with our pre-established plan: we were to meet back at the car.

Which meant, ironically, that I had to get back on the bike and pedal some 3 or 4 additional kilometers to our parking spot, in traffic this time. 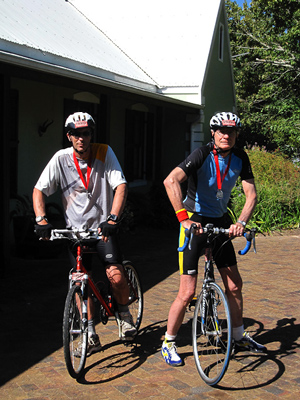 That wasn’t funny. Or maybe it was. I got there first, called home to report in and inquire about Henri, learned that he was just behind me. He had gotten serious cramps before Suikerbossie which cost him about 20 min. for a massage, and had finished in 5:49 – or just about the same biking time as me. At age 77. Henri cycles for his health, not out of passion. He laughs “I love cycling because I know when I come home in the morning after a training run that the worst part of the day is behind me.”

Two years ago, with no wind, he finished in 4:30 hrs. Last year took much longer in the insane wind, but he did finish whereas half of the participants didn’t. He only trains for the Argus because he has to and just for a few months before the event. He’s my hero.

We got into the car, stories came up, experiences were compared, exclamations flew out loud, the wind was condemned. We were both a little shaky. I think we both felt rather humbled by the incredible fitness we had witnessed all around us and yet immensely proud on our very modest level. We both wanted a beer.

And maybe were we a little sad, too, in a deeply secret place, way beyond the overwhelming relief: we’d bagged the 2010 Cycle Tour. Now what?