One day, a car, two people, many miles and finally, infinite beauty
New York, On the road, Photoblogs

There are no easy options when it comes to escaping the Big Apple and its madly turbulent crowds. I like to imagine the city as surrounded at all times by a series of concentric circles, or bubbles, characterized by a slowly decreasing level of overpopulation.

The inner bubble is centered on Manhattan and within it, no hope subsists. There will be a mob no matter where one goes. The second bubble typically includes the five boroughs and while there are hotspots, it is usually possible to find relative peace in outer areas such as Staten Island or Dead Horse Bay.

The third bubble extends outside of the city limits, fluid, following seasons and holidays, serving as an overflow for the two inner layers. At times they all merge, and the space becomes intolerable – picture summertime on Long Island or Fire Island, for instance.

On a long weekend like the last, however, the difficulty of finding solitude is escalated to epic proportion. The bubbles inflate like giant malign cells in search of healthy flesh to feed on. The search for peace and quiet becomes an equation: what are the distance and speed required to outrun the bubble’s expansion?

We took our chances with a bet on the Catskills.  Our objective was an exceptionally pristine mountain stream we discovered a few years ago on a fall color trip, and have revisited once since. We had never seen it in summer and thus had always found the place deserted and exquisitely beautiful. So we knew that this time we were gambling high but getting out of the city was also a matter of spiritual survival. 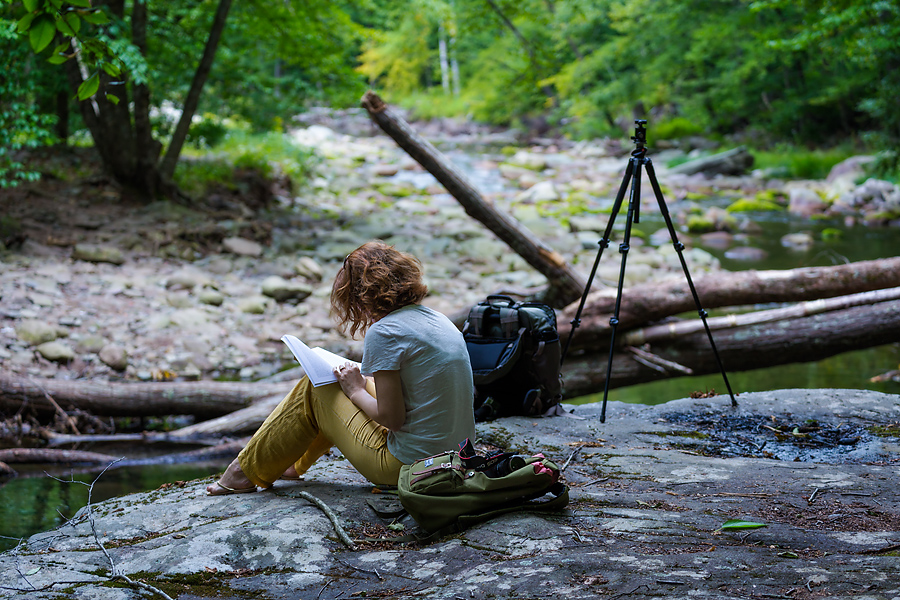 Surprisingly for a long weekend, Zipcars were plentiful. I found ours two blocks away and we left around nine in the morning, since finally getting some sleep had been an even bigger priority than escaping. I made coffee, filled a thermos and we stopped at the corner to get croissants. Lenox Saphire, a West African café-restaurant, has the best croissants I have found in many New York years.

Then we crossed Manhattan, hopped onto the upper level of the George Washington Bridge and ventured into New Jersey. I stopped for gas and to inflate our tires that were making the car feel like a small plane in turbulence with poor rudder coordination.

We headed northeast on highway 17 and drove for about two-and-a-half hours through varying traffic. As I mentioned, this was the beginning of a long weekend but also the end of school summer vacations. We figured all of New York State was with us on the road.

The Catskills grew taller and the road windier. Eventually we reached the sacred road that cuts through the mountains and which we have grown so fond of. Arriving from the southwest, we knew immediately that things were going to be different. There was actual traffic. Motorcycle groups drove up and down noisily. Cars were parked along the road and at every pullover. There were tents in the woods. We looked at each other and sighed. It was not a big surprise. Our river is the prettiest around.

We passed a few full parking lots, kept climbing and arrived at our spot. The open grass area where we had always parked by ourselves was occupied by three RV’s. One camper had gone as far as running an endless hose across the lot, into the trees and to a fresh water spring nearby. People were sitting by their behemoth doing nothing. I don’t get it but then again, it is one’s right to do what they please on an escape, including nothing. We sighed again.

We, however, were committed and had little time. We parked, grabbed our bags, cameras and picnic and walked through the field, into the woods and along the river for five minutes. When we arrived at “the pool”, two things were immediately apparent: a large tree had fallen across the river, and kids were crossing it on all four, shrieking in fearful pleasure. My heart sank. We were going to have to retreat.

But we didn’t. The kids were gone quickly, and with their departure, silence was back in the form of the river’s clear and soothing song. I set my tripod up to take the panoramic shot I had been planning and Marie wandered into a blissful plant zone. I’ll post the panorama soon.

The shots taken, we decided to have our picnic after all. People were walking to the beautiful pool at our feet from nearby campsites, coming for a swim or simply following the riverbed, but all and all, our space was never invaded for very long.

The water level was much lower than it had been previously, but I still set out to complete my water experiment. I’ll also post about that soon. This is the only place on the Eastern Seaboard that manages to remind me of Lynn Canyon in Vancouver.

Eventually, the afternoon maturing nicely, we decide to pack up and drive uphill for a while. But the crowds were back and made stopping at waterfalls unpleasant. We called it a day, drove through the mountains, down into the next valley, and headed home on small pleasant roads. As we kept our eyes peeled for the unexpected, we reflected on rather successful day despite the odds being stacked against us.

We had had the pool pretty much to ourselves, seen deer on three separate occasions, including two fawns by the road, spotted multiple turkey vultures, a groundhog, and, apotheosis of the day, stumbled upon a bald eagle at close range. It was sitting in a river when we spotted it no more than a hundred feet away, and by the time I pulled over and fumbled for my camera on the back seat, the bird was taking off heavily, its catch in tow, and it skimmed a line of trees behind which it disappeared. No shot.

Back in New York City, Lenox was a zoo as always. Sirens were blaring. The heat was back. Smells attacked us with a revenge. We had dinner inside for a change, sheltering ourselves from the neighborhood noise. As we ate and talked about the day, cold water was still flowing nearby, ringing in my ears like chimes in the wind. Two worlds, so near and yet so far apart.