Chose promise, chose due. I announced an article that would relate bracketing for High Dynamic Range photography to quantum physics and here it is. Am I delivering or am I delivering?

Now before I lose most of my readers, I should state the obvious: I am not a quantum geek by any means. Quantum physics is a topic that has always fascinated me but I can’t say that I am particularly 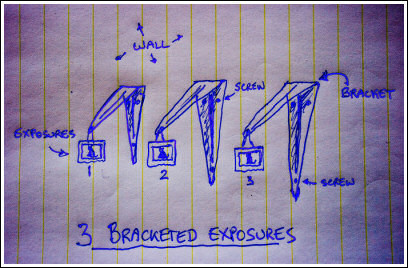 knowledgeable about it. I do my share of reading and thinking, that’s all.

So how do we define quantum physics? Quantum mechanics (QM) is a science dealing with the behaviour of matter and energy on the atomic and sub-atomic scales. It is a relatively recent field still being actively studied and defined, but it offers solutions to the shortcomings of Newtonian mechanics.

QM is paved with romantic notions such as Heisenberg’s Uncertainty Principle, wavefunction collapse, decoherence, entanglement, the multiverse and Schrödinger’s Cat – needless to say I barely understand that stuff. 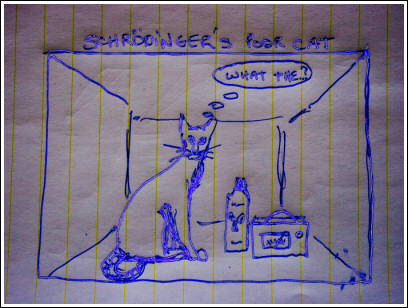 QM is so radically different from the Newtonian approach that it has sparked much interest, and debate. It is cutting edge, and as such, generates all kinds of reactions. Some of the principles of QM are quite difficult to even imagine, like the presence of an observer actually affecting the location and state of an object. Others like quantum computers and teleportation seem to be pulled out of a SCI-FI hat but they might in fact hit the shelves sooner than we think.

Like most revolutionary scientific ideas, QM has also triggered an entire parallel field of pseudo-science, or Quantum Mysticism. Of course, science and philosophy have never coexisted too easily, and they still don’t. But mankind has historically needed reasons to believe and ways to rationalize the absurdity of existence, and QM does just that, and it does it well. Movies like “The Secret” and “What the blip do we know!?” prove that the quantum theory has great potential in becoming a bridge between science and philosophy. And a money maker.

The bottom line is this: nobody knows for sure. It’s all too new. It’s all too weird. It’s all too raw. It is being shaped, and carved, and tamed out of chaos. Someday, quantum mechanics will probably be as boring as calculus. For now it’s a wild playground, an unexplored jungle in which many theories will die before roads are cut through it and people actually visit.

And this leads me back to HDR. I hope that by now you can see my point about the similarities. 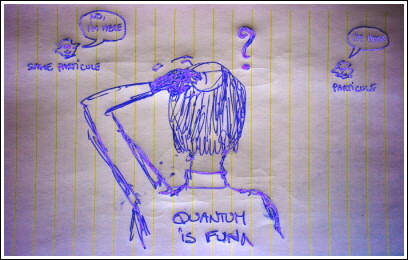 Cutting edge. Debate. Mysticism vs technicality. And my favourite, the observer’s determining role in a situation.

There’s conventional photography in which a single composition can only be rendered right by a single correct exposure, as metered by the camera and composed by a series of equivalent combinations of f-stop and speed. The light is a constant, so is the scene, and there are no variables to be introduced by the photographer. From a theoretical point of view, any given photographer with the same camera, location, framing and time of day should render the same exact image.

And then there is High Dynamic Range photography where anything goes. The photographer – or the observer – actually influences the outcome by just being there. The image produced after development will render a scene that could only be observed from within, and suddenly reality becomes a variable.

The things I’ll do for science… So here’s my latest HDR experiment: it’s a triple bracketed exposure of the Nine O’clock Gun firing at night, in which the first (correct) exposure was the actual firing shot. Now, while I blinked, was the cannon still there?