One might notice that out of an old habit, I still resist the notion of spilling my guts on the blog, probably because of a wise inherent fear of Uncle Sam’s devious tendencies.

Today, nevertheless, is a brilliant day. After nearly two 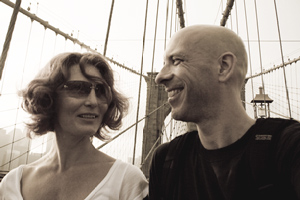 years of meeting sorrow, patience, hardship, sadness, distance, isolation, hope, joy, suffering, deception, failure, success, Triumph and Disaster, and treating all those impostors just the same, Marie and I finally get our reward in the form of a stamp. Or a seal. Or a signature. Not sure which one yet, but it is grand and pompous and envied. It grants her an Unconditional Statement of Acceptance as citizen of the most powerfull (sic) nation on Earth and me the long coveted right to legally petition for an adjustment of status from pest to tolerated pet.

It is, yet again, an extraordinary date to be remembered. We’re almost there, it seems. I would say that we deserve there at least as much as some, and more than most. Love can finally be home. Comme le disait si bien mon paternel, "le temps ne respecte pas ce que l’on fait sans lui." Tout vient donc bien à point à qui sait attendre.

So now I’ll make one heap of all my whining and risk it on one turn of pitch-and-toss. I’ll throw away most of my pitiful possessions and get on a plane and a train and a cab. It’s time to start over. A new horizon awaits me. Awaits us.

But why is the rum gone?