La Descente de Manhattan or Running Too Far, Too Long

A few nights ago, as I routinely fought the pre-sleep chaos in my mind and attempted – once again – to figure out where the water in high pressure fire hydrants comes from, I also decided I wanted to run a marathon. It was a fuzzy idea and soon, darkness got a hold of me and I fell asleep and oblivious. But in the morning, surprisingly, the thought was still there.

Now, I have said before that I would never run a marathon, frown and disdain. I don’t like crowds and certainly don’t feel a need to join one on a race of egos. Cycling the 108 km Argus in South Africa last year was a nice challenge but it was done for a very affectionate reason, not a sportive one. And I indeed swore not to do that again, having suffered most of the way and decided I do not show the required masochistic tendencies for cycling. So why would a marathon be any easier?

Cycling the 108 km Argus in South Africa last year was a nice challenge but it was done for a very affectionate reason, not a sportive oneBut times are tough and living in New York’s urban cocoon leaves me feeling weak and helpless, as if all initiative and willpower were slowly being stripped away from my soul to obtain this robot citizen needed to sustain our society. My knee jerk reaction is one of fear and I respond by seeking ways of countering such insidious slide into oblivion, no matter how outrageous they might be – ways to prove to myself I can still be in control, be different, set goals and push my own limits beyond the reasonable. So I come up with a marathon.

Of course, while having been a steady runner for the last six years, I am by no means a marathoner: too long a run, gets incredibly boring, not to mention the pain. And then there is the crowd. On the other hand, I am forced to admit that running a marathon within the frame of an organized race seems logical; all the support infrastructure is provided, hydration points, toilets, cheerleaders, etc. No need to carry anything, which is a big plus. And peer pressure must help a lot, too. I did say peer, not beer.

In any case, needing to assess the lunacy level of my project, I decided to go for a long run. Some research showed that most experts recommend a marathon’s long training run to be no longer than 30 km – or about 3/4 of the distance – because beyond that, the damage outweighs the benefits. A 42 km run is incredibly taxing on one’s body and running it simply for training purposes would only be debilitating and hurtful.

So I opened Google Maps and looked for a playground. It didn’t take me long to figure out I wanted to run down the island of Manhattan. I measured it all and with an added loop around Battery Park and across the Brooklyn Bridge, I came up a bit short of 30 km. I’d have to get creative towards the end.

A plan was drawn, verified and found to be doable, in theory. I’d ride the subway to the northern tip of the island and come down running alongside the Hudson River, allowing for three possible levels of success: full, partial (I would skip the bottom loop) or limited (if I hit the wall, I would bail completely and catch a subway home), a scheme astutely based on web programming’s “graceful degradation” principle.

I set out around 2 PM yesterday, caught the express A train and rode all the way to the end of the line, 207th Street near the top of Inwood Hill Park. I brought along my Camelback fueled up with blue Powerade and many Gu’s stashed in a pocket. The ride takes 45 minutes to an hour, a sobering fact that made me emerge in the sun feeling a mix of relief and deep worry. Surely, I had gone too far.

Surprisingly, Inwood was still half-covered in snow. I geared up, put both my knee braces on, adjusted the Camelback, drank some more and walked briskly around the tip of the park to a point at the narrows overlooking the railway. I then started the Forerunner’s GPS and selected a training program I had elected to use based on more advice from internet gurus, a repetitive sequence of 10 minutes running for one minute walking.

It was a beautiful late-winter afternoon, or maybe a glimpse of early springThe timer started. I silently swore at myself for having come up with such a stupid idea and launched into a slow run. My firm intention was to take it easy all the way home and I estimated my total time would fall between a shameful three and a very shameful three and a half hours.

It was a beautiful late-winter afternoon, or maybe a glimpse of early spring. A light breeze was blowing gently but the sun soon forced me to strip out of my wind breaker. The full Camelback sat squarely on my back without bouncing at all, thanks to a makeshift chest strap I have added to it. I tried to settle into a rhythm: drink just under a cup every two cycles (or about 20 minutes) and suck on a Gu every 45 minutes to start with, then every 30 minutes, 90 minutes into the run.

I crossed the railway, followed the playing fields and at Dyckman Street, was fooled into thinking that the riverside trail was the only way to go. Hidden to me, the real bike path actually lay above, next to the highway. Instead, I ran all the way down to the George Washington Bridge on a disgustingly muddy and snow-covered trail that eventually vanished and forced me to climb onto the railway side and run on loose gravel, praying not to be hooted at by the very Amtrak train I’d traveled on from Montreal.

Below the bridge, I rejoined my rightful track and steadied the cadence. I was already falling behind schedule, in part due to that previous mud. But the afternoon was brilliant, I felt good and the view was wide open to the west. Making sure I never set my sights on a ‘next point’ too far to effectively grow bigger from a look up to the next, I began cutting the route into short, manageable segments. The 10:1 tempo helped a lot, giving me a rest to look forward to no further than 10 minutes in the future. The landmarks I chose provided me with a second scale, yielding rewards every 20 or 30 minutes. 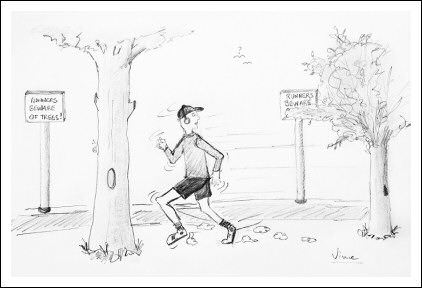 I must have been hydrating too neurotically and had to stop four times in the first half of the run, in a rather counter-productive fashion that forced me to use these pit stops as one minute walking intervals. Other then that, it was initially smooth sailing. Lots of runners were on the path, pretty much all of them passing me at warp speed, head high and chest forward, like Olympians on a victory quest, fluo tights and high-tech gear flashing like beacons in the night. I cheered my poor self up by reminding it that I was probably going further than they were, if ever so slowly. I tried not to think about the unavoidable fact that my pain the following day would be tenfold.

A large cruise ship sailed off far below on the Hudson. I passed, unseen, the north end of Central Park. Then came its bottom at 59th Street and I was in known territory, having run this section last year. As the Sea, Air and Space museum flew by, pardon the pun, I was careful not to get into a mid-air collision with one of the too many tourists that flock aimlessly around, looking for postcards, the loo, a lost kid or simply a meaning to their vacation.

The sun set as I approached the bottom of Manhattan. Twenty kilometers into the run, just above Battery Park and Ground Zero, I called Marie briefly to tranquilize her and update my progress – or the lack thereof. I was still behind schedule, with another 10 km to go if I wanted to reach my level one goal. The legs were getting a bit sore but pain hadn’t yet settled in. “I’m having fun,” I said to finish the call. “See you soon.” Fun? Famous last words.

I joined my bi-weekly favorite path around Battery Park, running much slower than I normally would there, and the reality began to sink in: I was tired. My knees were complaining. I had run two thirds of my route but one remained. With a little over 8 km to go, I decided not to add the extra loop around the bottom of the island I had initially planned to top-up my distance to an exact 30 km. It meant I would arrive home early and could always use the neighborhood to extend, if I had it in me. I didn’t think I would.

By the time I began running up the Brooklyn Bridge, I was on autopilot, focusing on not tripping over my own feet or hitting a careless pedestrian – an incident that normally would have been annoying but might now throw me to the ground. It was hell. I used most of my triple-language bad vocabulary to describe how bad I felt to an invisible companion – wondering distractedly if he knew Reinhold Messner.

It was hell. I used most of my triple-language bad vocabulary to describe how bad I felt to an invisible companion – wondering distractedly if he knew Reinhold Messner. The distance between the Brooklyn end of the bridge and home seemed to stretch forever. I angled towards the Promenade to extend the run and arrived flush with home with almost 3 km of agony to go. Barely able to put one foot in front of the other, I stumbled around clumsily, pondering the puzzling fact that while my stamina was actually rather good, legs were critical and turned me into an early wreck. The pain was getting strong and muscles just refused to respond accurately. And even funnier, my arms – biceps and triceps – had now started to ache too. I grumpily chased away an image of myself running around with flailing arms; it surely was just the distance.

Finally, I stopped the chrono at 30.04 km just past our doorstep and kept walking for a few minutes. Then I looked at the damage: the run had taken me 3:21 hours, which meant that I just could not hope to finish an eventual marathon in less then 4:30 hours. That was quite marathin, so thin in fact that had I had to run 42 km that day, I simply would not have finished.

My time for 30 km is actually an average marathon time. And some dude, out there, managed in 2008 to run his 42 km in 2:03:59! Respect, man! He was running, for much longer, more than two and a half times faster than me. In fact he was running a lot faster on his full marathon than I run on my regular 10K. Sigh.

Alea jacta est. I will not be running a marathon any time soon. Maybe later, if I manage to train better. Oh well. It was worth a hope. Next, I’ll try my luck at Olympic ping-pong.

Update: On a more serious note and following Sigrid’s comment, here are fascinating links to the story of the man who just ran 365 marathons in as many days and those who ran across the Sahara.