It would seem the fantastic emerging art of DSLR videography is going to challenge conventional photographers on concentration and focus levels, if you’ll pardon the pun. When I shoot stills, I immerse myself completely in the scene and think only in terms of photography. Composition, settings, technique, lenses and goals are all specifically photo – and thus single-shot – oriented.

Video, however, ticks rather differently. It involves motion, time-lapse, the progression of a story and very different sets of techniques and settings. Suddenly, I find myself split and torn, pulled in two opposite directions, one that hunts for glimpses of a motionless world and the other hungry for the passage of time and the fluidity of movement. They conflict. And without much discipline, I’ll end up messing both up.

Out on Coney Island this week, I had intended to play on all sides, recording some video, shooting a 360 panorama and taking some stills too. I messed up the panorama. Too few stills were taken to make up a full post. And the video footage is still being studied via a very steep learning curve. It’s incredibly promising, though, and will eventually come off the editing board and onto these premises.

In the meantime, here’s a snapshot of New York in summertime. 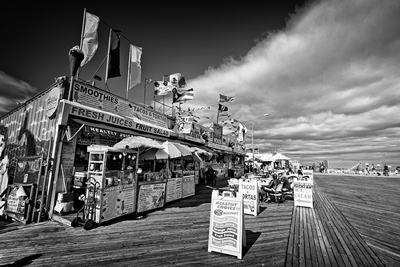