The generous invite from Chris and Tracy had actually been received half a world away on a freezing New York night, as the four of us sat tucked away from the cold in a Lower East Side joint eating pizza 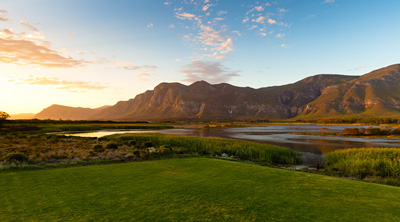 . “You must go to the farm,” they’d said enthusiastically, “you guys will love it there. There are birds everywhere, you can kayak in the lagoon, go sand-surfing down the dunes, you can use all the toys, Land Rover, quad bikes, it’s quiet and remote. Simba will show you in, he lives on-site.”

What they called a farm was their second house, built on a dirt road near Stanford, South Africa, in the middle of nowhere. To add some drama to the story, Chris had added: “You can even drive the tractor. I’ve always wanted a tractor, you know? Oh, and bring a lot of mosquito and tick stuff. On windless nights, they swarm windows like madness.” I had frowned. To chase the swarming insect picture away from our minds, we’d then taken them for a long walk through Chinatown in sub-zero temperatures.

But months later, when Marie and I finally found ourselves in Cape Town and it turned out that my best option for paragliding was in Hermanus, the coastal town just before Stanford, we decided to combine some flying to a few days off the beaten track and made good 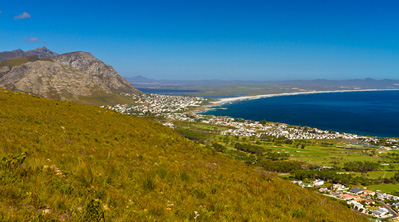 on the farm offer.

We packed up the Landcruiser with a tenth of what it would usually carry and headed east through Sir Lowry’s Pass and then southeast along the coast. Sunny Stanford is less than three hours away from Cape Town but it feels perfectly isolated and utterly tranquil. The small town is located in a wide estuary plain between the Klein river and gentle rolling hills to the east. But in the west just beyond the river, a formidable mountain range dominates the valley and infuses the scenery with dramatic perspective.

Most of the town streets weren’t even paved and for only noticeable supply outlets we found a Spar grocery store and a gas station. Our directions beyond Stanford were a bit sketchy but Marie had been to nearby Mosaic Farm before and we eventually found the dusty road to our retreat.

Some ten kilometers later, once we had arrived, taken in the incongruous green lawn around the place and met Simba, a very friendly Zimbabwean who explained he would turn the generator on daily to power the fridge and let us cook at night, we unpacked the car, chose a room, and sat on the house’s balcony looking around us with unbelieving eyes.

In front of us, a stone’s throw away on an immense body of shallow, marshy water, was a huge flock of pink flamingos. They were busy carrying on their noisy routine and paid no special attention to us. 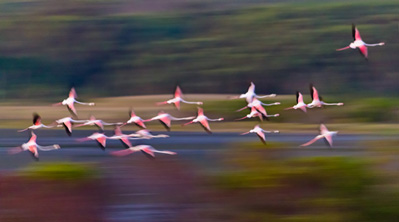 There were ducks and geese and all kinds of other birds. We had arrived in a bird watcher’s paradise. The house was a modern bird hide, complete with all the comforts of home. We would be watching the flocks coffee in hand!

The single storey house was built on stilts and was accessed by two sets of stairs, one in the back and one in the front leading to the large wooden terrace where we stood, equipped with patio chairs and lined with tall glass doors and windows. Below the house in the shade were parked all the “toys” Chris had mentioned, in various degrees of decay as they were seldom used: a very old Land Rover, two and a half quad bikes, a rusted fuel-powered jet-propelled kayak, another conventional one, a couple of old sailboats, a windsurfer, lawn mowers, a half-deflated inflatable boat, a zodiak on a trailer and two braais.

Most of the toys were of a noisy nature and didn’t particularly excite us, but the kayak and the inflatable immediately stood out as our expedition vehicles. I inflated the latter and inspected the former for spiders, having a long experience of the absolute incompatibility of arachnids and women aboard floating devices (remember the Richelieu, Gitte?), and we promised ourselves a late afternoon 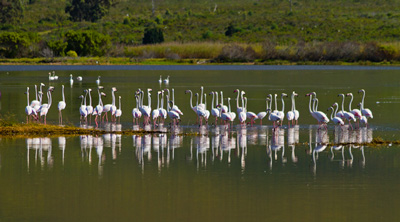 But we had managed to get a last minute reservation at Marianas, a famous little restaurant in Stanford run by an interesting couple who serve a minimalist menu for lunch only, and we drove back to town in the fierce mid-day heat.

Lunch was delicious and lasted hours, despite the thermometer reaching 37°C in the shade. We were the last to leave and chatted with our hosts for a while before heading back to the birds. We changed, improvised a dry bag for the cameras and binoculars with a picnic cooler and dragged the kayak to the water. Stepping deep into dark mud, we managed to push off through shallow but surprisingly clear water and began paddling towards the flamingos. They would not let us in too close, however, and we had to keep moving and explore the lagoon.

We were going to go back out on the water every day for four days, sometimes with two boats, sometimes together in the kayak, mesmerized by the incredible bird diversity, taking pictures, watching sunsets, exploring the wide estuary and its river, stalking our birds, talking softly and paddling so hard our arms began to hurt. We had once again broken free from civilization.

Every morning, our ritual was punctuated by our stove-top espresso maker’s hissing, the crunching of rusks, the sound of birds, camera shutters clicking away; the binoculars 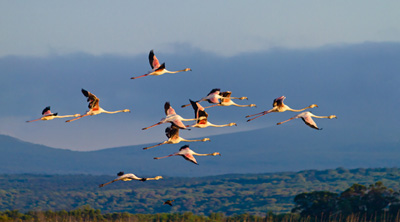 darted in all directions and time seemed to slow down to a wing flap. During the warmest part of the day, we would go on an excursion to the sand dunes or Cape Agulhas (stay tuned for pictures). But we always made sure to come back on time for a sunset kayak ride and the later boerewors braai.

I will post different shots of the dunes and beaches, of our visit to Africa’s southern tip and of all the sunsets. For now, here are the birds. So many of them. We spotted over 40 species from the terrace and the kayak. Sigh.