The last two years have been rather rough in terms of running. I’ve been cursed by a fateful book and plagued by cramps. I’ll soon post about that.

But back in Cape Town last December, I did manage to revisit one of my favorite Table Mountain runs, first charted in 2010.

The weather was dramatically different this time. While Cape Town’s summer month of December is normally windy, sunny and dry, there had been an unusual amount of rain and clouds were still hanging low. Not the typical “table cloth”, a local orographic cloud wrapping around the mountain when the southeaster blows, but the widespread, convoluted clouds associated with low pressure systems. 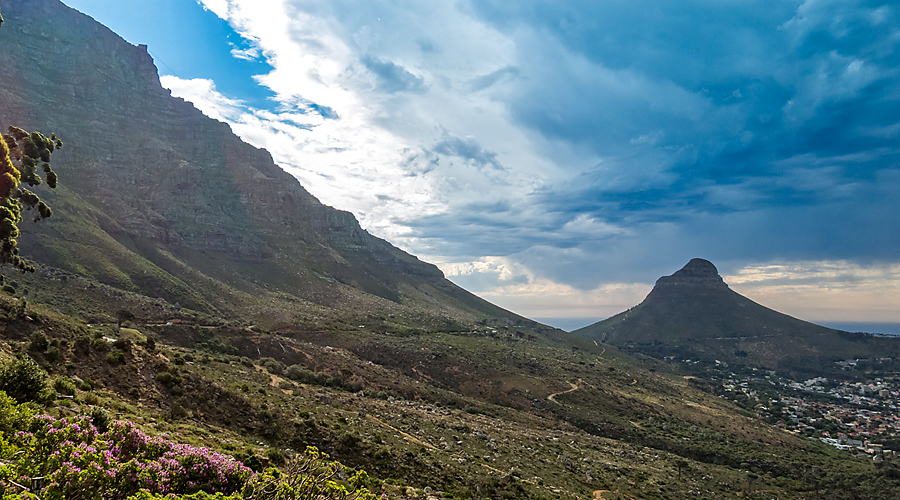 The Cableway and Lion’s Head

Marie dropped me off a bit beyond the cable station on Tafelberg Road to avoid the crowds and I ran away from the tourist madness, heading north on the blocked-off road that now serves as an exclusive – and deserted – walking and biking lane.

I carried my trusted G series Canon, a plasticized Slingsby’s trail map because the paths can turn into a maze in that area, was tracking progress on my Suunto Ambit and, yes, I’d brought a pepper spray along. Mostly to reassure my driver, as I count on my legs and alertness more than on a wind-sensitive device, but the fact that I had a camera with me did made me valuable commodity and there had been muggings in that zone before. South Africa unfortunately still suffers from a huge social divide and crime is steep. The difference between owning a flashy camera and reselling said object at a profit probably is as thin as a knife’s blade.

The view on the first section is superb; from the Cableway, left, it spans Lion’s Head, the new stadium, downtown Cape Town and her harbor, Robben Island and across Table Bay, the long beaches of Blouberg. Looking back at the steep rock face of the Table, I was awarded a very good view of Platteklip Gorge, one of the main trails straight up to the plateau, steep and relentless but deep into a recess and much less exposed than India Fenster. 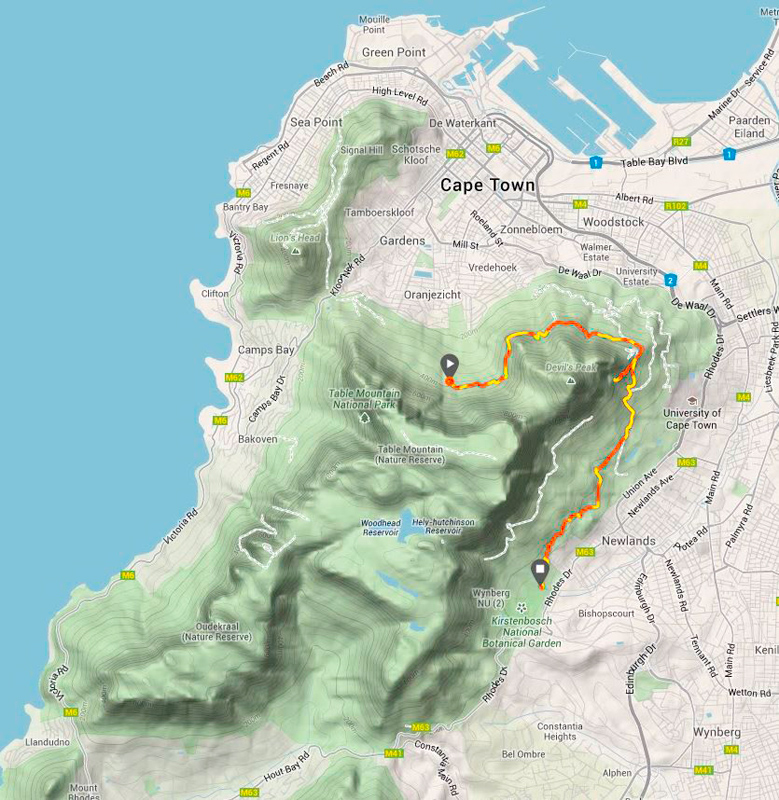 In a few places along the road, small rivers were flowing down the slope and forming pristine turquoise pools, an extremely rare sight on the mountain in the normal dryness of summer, especially since most water in the Western Cape is rendered clear brown by humic acids from traveling through fynbos soil.

I eventually rounded the very top of the Table Mountain massif, running steadily around the base of Devil’s Peak where Henri and I had aborted a hike a couple of years back, and soon, short vegetation gave way to lush trees and grasses. At that point the trail becomes a little erratic, splitting into multiple sub-trails and even though I had been there before, the map came in handy. 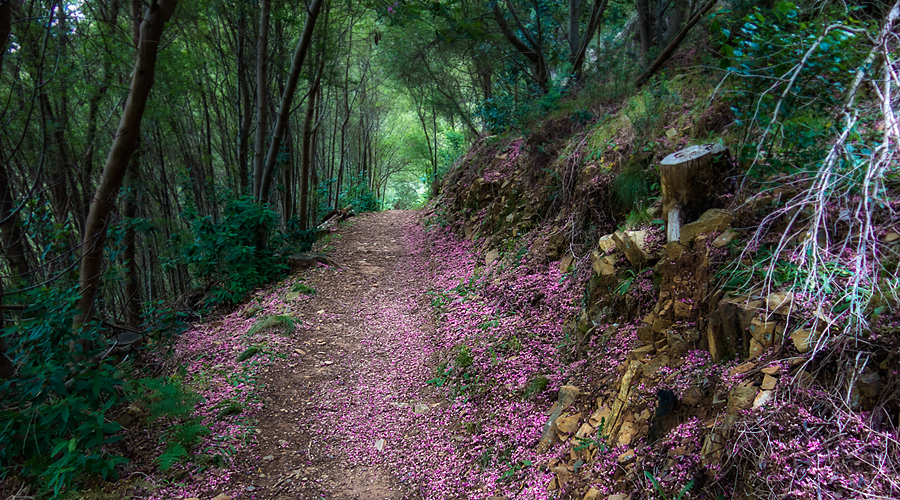 I was running under a thick canopy, on a pink bed of Keurboom tree petals and could hardly see ahead of me past the next bend in the trail. I had to backtrack at one point but eventually negotiated the maze and kept pushing south towards Kirstenbosh where Marie would be waiting for me in the BMW – I had decided to skip the very last part that descends steeply through the Cecilia Plantation and the green belt to spare my knees.

I again had a bit of trouble negotiating the splitting trails and ended up cutting through the bush. As I alternated a slow run and the occasional scramble through difficult sections, I took the time to smell the air and let it fill my soul. I had not seen anybody on the first two thirds of the run and while there had been a few walkers and a bike or two towards the end, I felt alone and at peace. No ticks, no mosquitoes, the occasional pofadder to keep me on my toes, not a bad place to be.

Cutting right through the upper edges of the botanical garden and leaving the contour path behind, I aimed for the parking lot and was there within 5 minutes of my ETA. Marie was reading in the car as the last visitors exited the garden. There would be boerewors on the braai soon. Mission accomplished.