We finally manage to catch a cable car ride to the top of Aiguille du midi, some 12,600 feet above sea level
Chamonix

The rocky spur is in great company with Mont Blanc, roof of Europe, looming just to the south, other famous summits such as the Grandes Jorasses stretching to the north, and to the east, a wide open amphitheater of snow and ice called Vallée Blanche leading to a broad range of Italian peaks. 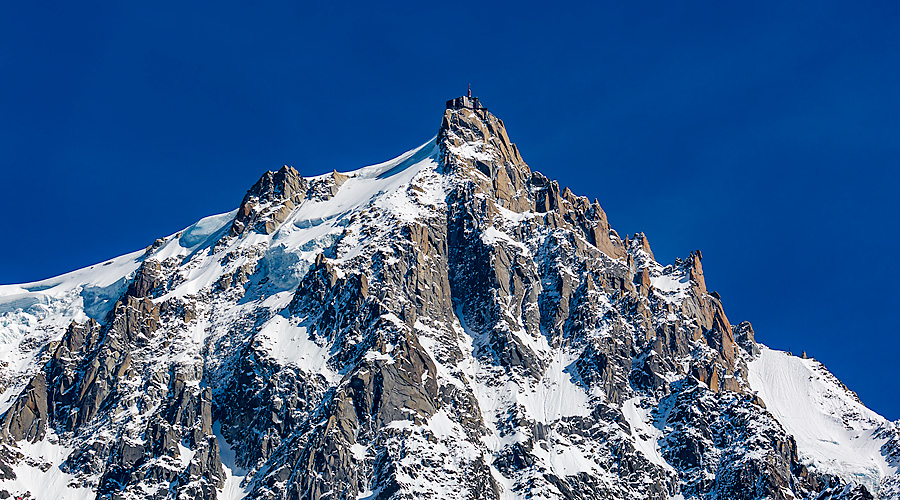 An extraordinary cable car, or “téléphérique”, climbs to the top of l’Aiguille du Midi in two sections. Dating back to the turn of the twentieth century, the cable car’s slow construction spanned both World Wars. Originally built between 1904 and 1927, a first indirect version reached the Col du Midi, a snowy saddle located below and to the south of the actual summit, in multiple sections. The final section of that first ambitious project was never completed, however, nor was the last stretch to be built ever opened to the public1.

The new iteration—which remains today—was opened in 1955 and this one climbs directly to the top of l’Aiguille without a detour via the col, and in only two sections this time.

The first part carries passengers from Chamonix to the intermediate station of Plan de l’Aiguille after an aerial travel of more than a mile, four thousand feet higher than the point of departure and almost eight thousand feet above sea level. There, travelers are offloaded and board a new car for the second and final section, a vertiginous five thousand foot climb without a single pylon between stations, or almost two miles of cable! 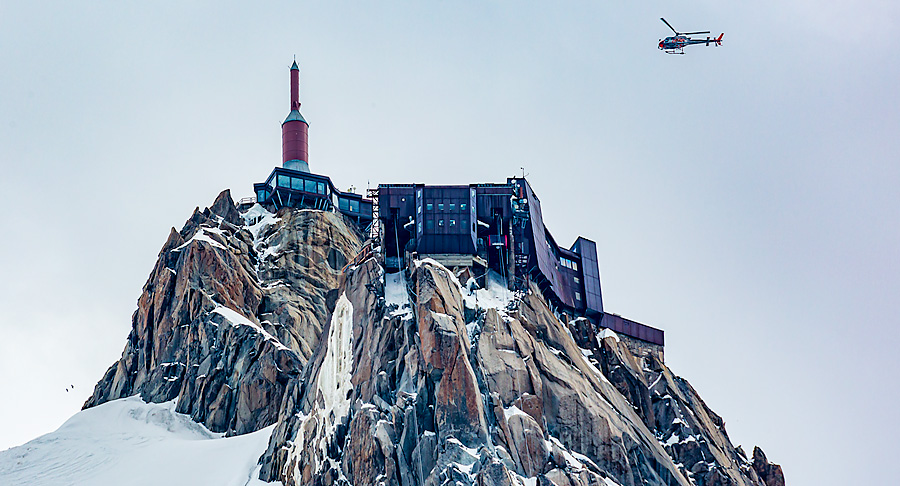 The system uses a two-cable setup, one carrying the cabins and the other pulling them. Amazingly, those cables were initially hauled up by workers—not helicopters as in modern days—to the top station which had been summarily built in advance. Talk about a titanesque effort! Thirty mountain guides first carried up a six thousand foot-long service cable that weighed a metric ton. The main cables were later pulled up with that service cable as a guide line and weighed up to forty metric tons each!

The téléphérique is rigged for a “va et vient”2 operation, meaning that only two cars travel in opposite directions. A total of four cars thus operate over both sections, each able to carry up to seventy souls. A two inch-thick main cable carries the cars; it is fixed to each station. A slightly thinner one handles traction; it is attached to the cars and forms a loop through both stations.

The ascent is steep and hurried, the cars supposedly reaching twenty-seven miles per hour in the final stretch. Ears and shutters click, and a few tourists lose their nerves. But many of the passengers are climbers and paraglider pilots, depending on the time of day, and more accustomed to heights. At over sixty euros, the round-trip is not cheap, but locals must get a discount or maybe budget for this the way I account for E-ZPass highway tolls. A necessary evil.

The top station reminds me of an ant nest, its main building located above the valley on a small outcropping. From the arrival dock, tunnels spread through the rock towards a main viewing area, a shop and cafeteria, three smaller satellite viewpoints on the opposite side, as well as a sixty-meter elevator shaft that climbs, right inside the very tip of the aiguille, to a narrow observation platform. 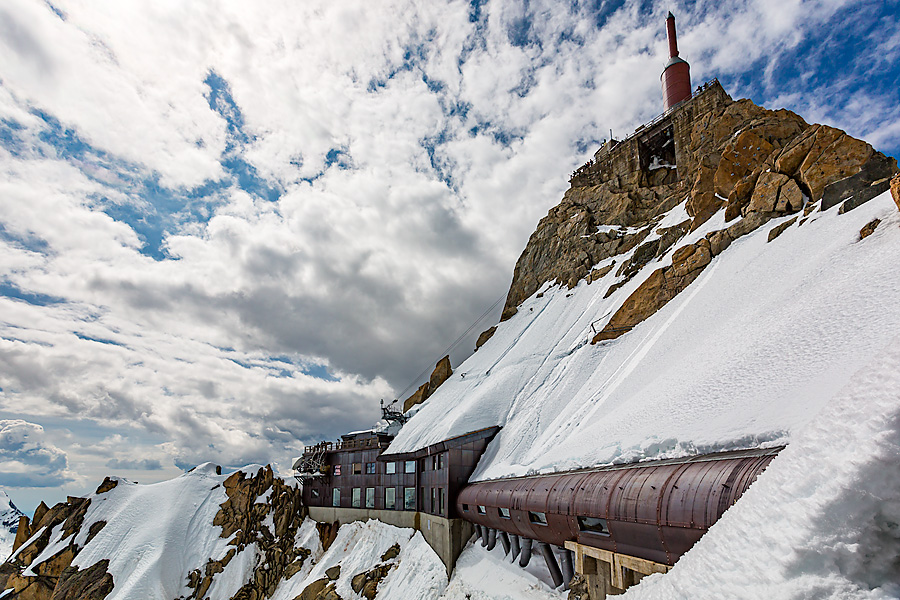 On the back side of the station

When Marie and I finally manage to go up, a last-minute decision made on an aging weekday afternoon, a few cumulus are playing around Mont Blanc but the sky is mostly clear and the view should be brilliant. This will be a pilgrimage I have dreamt of for decades, hence the title of this post, Retour à la Montagne (return to the mountains) which is one of Frison-Roche’s novels. We arrive at the bottom station between trips and have to wait for a long half-hour, the cars running every hour.

When the red cabin arrives, enough people have queued up to actually fill it. Marie and I squeeze into a corner by a pole while people pile in behind us, and we look around, taking in the lightly scratched plexiglas windows, steadying roof handles and a tiny operator station. At least at this time of day, we do not have to deal with skis and bulky climbing or paragliding bags. 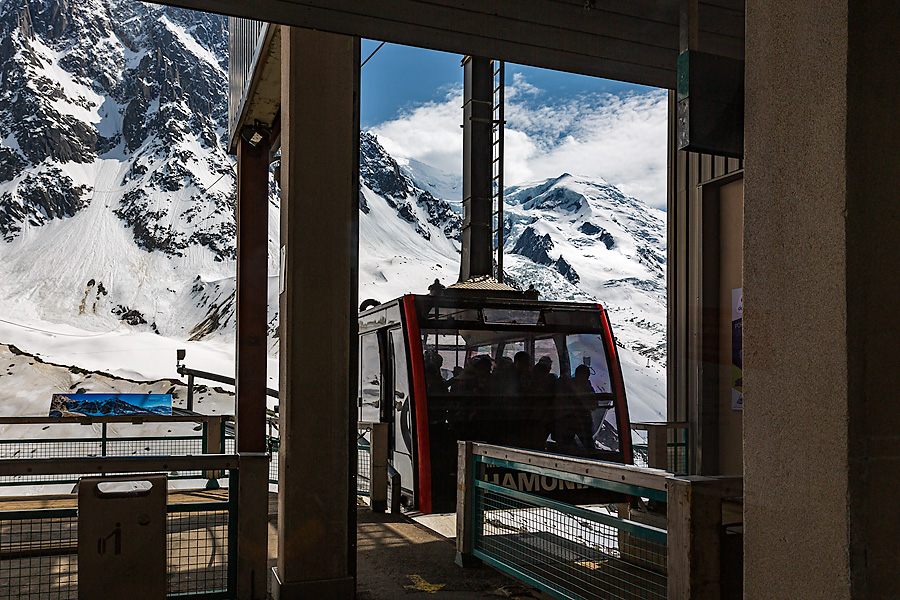 Then we are off. Marie soon reconnects with her fear of heights, but she resists defiantly while others are giving up and closing their eyes, or even sitting down on the floor in absolute agony. The car swings wildly upon passing the pylons, drawing nervous exclamations from the crowd. Our trip to the intermediate station completed, we exit and queue up for the second stage. The cables stretching far above us seem to disappear into oblivion.

The second ride is the most impressive, shooting straight up in close proximity to the sheer rock face. As we watch the world recess below us, the light improves, horizons move back and I must fight to retain a sense of gravity, of grounding to the planet we live on. All dimensions but a dizzying vertical seem abolished and time stretches bizarrely then contracts, like pupils stressed by moody light, and at the last minute our upward traveling vehicle slows down and is swallowed by the upper station, which we enter from below. 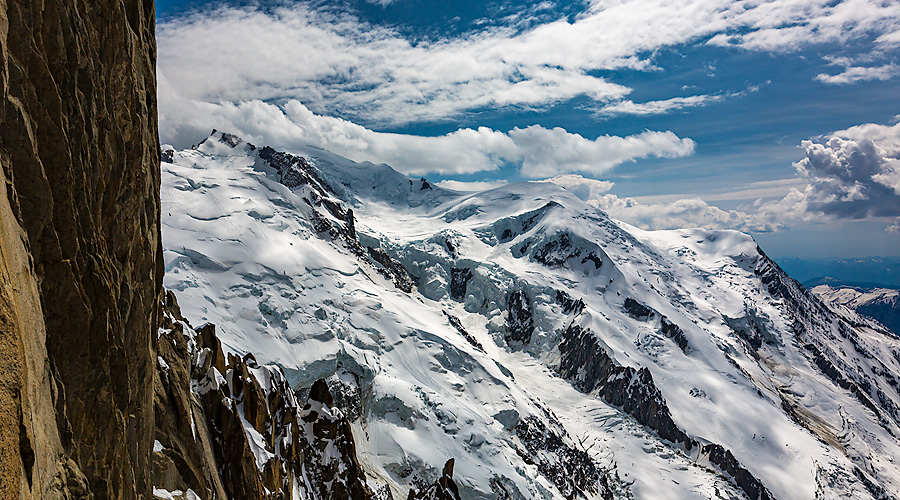 Last part of the ascent

Our tourist herd is let loose into thin air and spreads out in various corridors and multiple floors. We drift inwards and across, ending up on terraces overlooking the stunning Vallée Blanche, away from Chamonix. Mont Blanc is towering over to the right, wearing a small convective hat, and Italian summits are sharply defining the southeast panorama. We have secured a front row in an opera of peaks and a symphony of light.

Time has sculpted the most convoluted and mesmerizing features in the ice fields all around and the sun makes them shine with soft green hues that contrast sharply with the stone’s rusty copper and the dark gashes of crevices. Here and there, like the ritualistic paths of ants on their forage grounds, slow, stiff boots have etched pathways to and from the summits, and skis have carved the safest slopes with elegant arabesques, often lazy, at times daring. 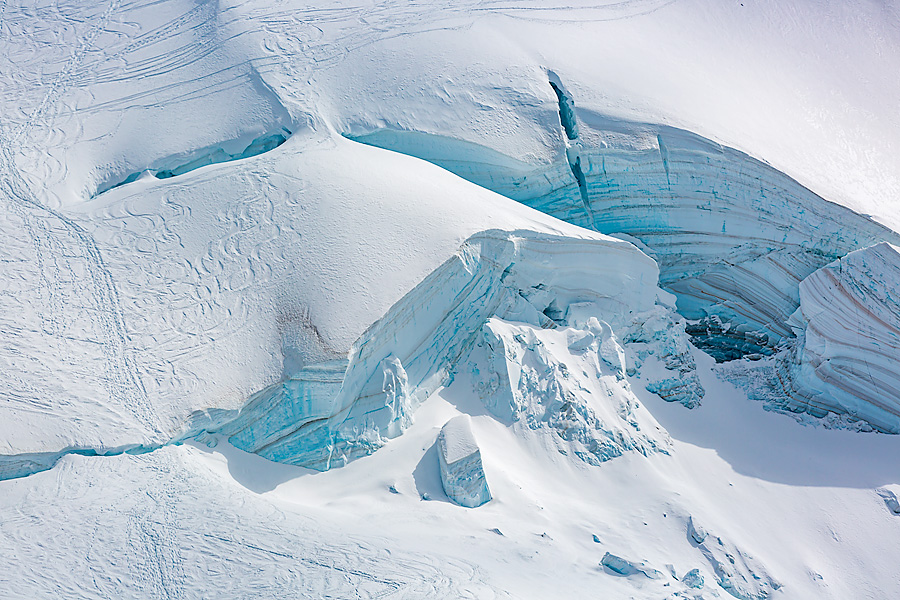 Samivel could not have painted it better

The temperature is quite comfortable despite the altitude, but we are completely unprepared for the incongruous appearance of a butterfly which, seemingly unconcerned by the rarefied air, flutters around as if visiting a flower bed at sea level.

Later a choucas3, the typical mountain bird so often depicted in Samivel drawings, pays us a visit to show off his bright yellow beak over a deep black robe, posing handsomely on a railing for our cameras and probably hoping for hand outs, because after all, pourquoi pas?

I had feared the onset of the stinging headache that had plagued me when I last visited many years ago, but neither one of us seems affected, despite such a rapid ascent and associated reduction in oxygen. I can feel the strain when climbing stairs, however, a reminder that hypoxia at altitude is not a roll of the dice, it is always there, taking its toll.

On our way down, we do a stopover at the intermediate station, walking out along a rocky path where we are greeted by rather friendly marmots which mostly ignore the loud clulessness of a few international human specimens busying themselves with selfies and phone conversations. The chamois I had hoped for remain elusive. More butterflies are erratically fluttering around and Marie actually finds tiny flowers along a cement edge at the foot of the station, possibly explaining their presence. 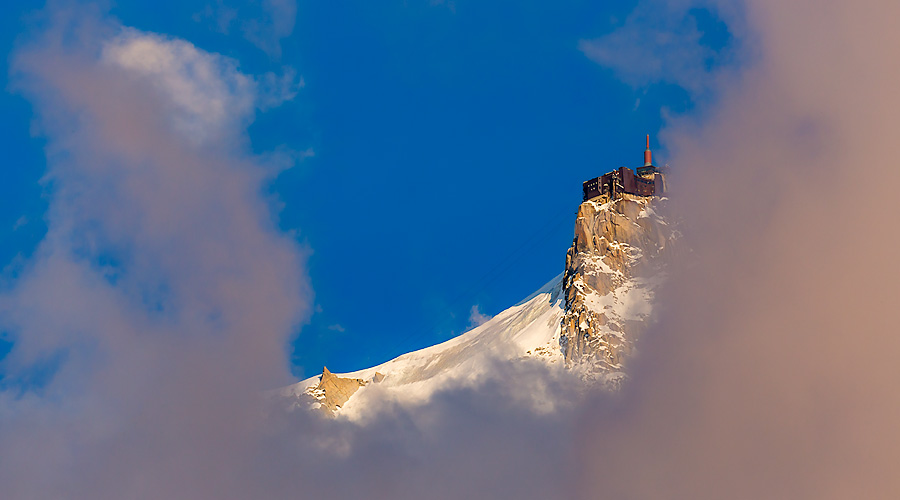 A cloud curtain is pulled

We are back in the valley in time to go pay le Refuge Payot a repeat visit for divine charcuterie and cheese, then retreat out of the lovely downtown to our own neighborhood. We settle into our nightly ritual, sipping on a G&T while watching late climbers cling to the distant cliff. Like each evening, birds are flying and singing merely all around and tonight a kitty comes to visit, making us smile. The land is calm and quiet, the battle is everywhere but here.4 From where we are sitting, life seems deceptively clean and simple.

Our world spins a little further around its fiery sun and the light slowly fades; shadows engulf the valley and far above us, a needle glows bright orange in the very last cast of sunset, and then it is gone, a cloud curtain is pulled, the night settles in, and us with it.

1. Lots of very interesting archival pictures of the construction of the first version of the cable car, at the turn of the 20th century, can be found here.

3. The choucas, marmot and other Alps pictures are actually posted in the main VMP gallery here, just scroll to the bottom.

I hope the pictures in here speak for themselves. Mountains are so incredibly, profoundly magical that I can almost understand why so many have perished trying to tame, conquer or befriend them, and will sadly continue to do so.