A rant about my barefoot running struggle. A cruise ship medley. More glimpses of the macroverse. Stay tuned!

For now, here is a peculiar scene of an ant nursery. I lifted a log recently in Staten Island’s Wolves Pond Park, in search of salamanders. What I found instead was a busy ant nest. As soon as exposed, the poor insects began frantically relocating their nursery, and I snapped a few shots.

Only once looking at the image full-screen back at home did I realized what I had captured. The shot below shows ant eggs at various stages of development and you can see the animal shape appear slowly, translucent at first with colouration later. This to me seems to come straight out of a sci-fi movie – think of the clones from Star Wars’ Clone Wars, lowered onto the battlefield in a fetal position and stretching later. Spooky. 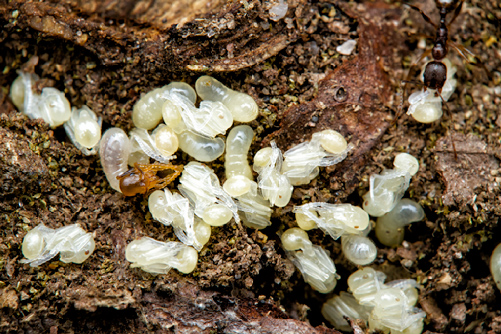