Three years ago in fall, after finding mesmerizing pictures of it on a blog, I set out to shoot the cranberry harvest in Richmond. I’ve been going back ever since and it’s become a 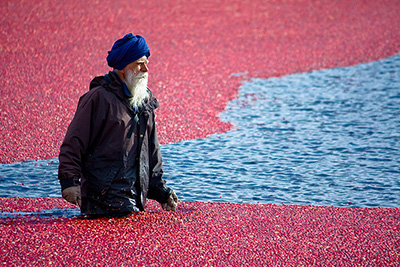 pleasant ritual, one that reminds me not only of leaves soon turning gold and approaching winter, but also of the evolution of my photography path. I shot the first season with my old trusted Canon G3, the second with the 400D and this year’s with Abetoo, my new 450D and IS lenses. Without a doubt, I’ll come back next year with a 1Ds Mark III. So what if it costs the price of a used car? I’ll be rich and famous.

As a reminder, cranberry harvesting is the yearly act of collecting all those pretty little red berries and sending them on their way to your can of juice. It’s an autumn routine that takes anywhere from a few days to a couple weeks of intensive work. The fields, called bogs, are first flooded, sending the ripest berries floating to the surface; the rest are mechanically shaken loose. They are then gathered tightly with long floating rubber nets and pulled to a corner of the field like a giant red tide. There, a powerful spray of water pushes them up 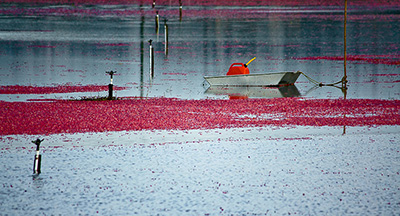 a conveyor belt and they are loaded into trucks, while men keep herding the berries in, threading through 2 or 3 feet of fruit-covered water.

It makes for rather surreal scenes and color is everywhere. Red of berries, blue of sky (when the weather cooperates!), green of surrounding fields, and the multicolored turbans of the workers. I began, 2 years back, by trying to capture contrasts and the overwhelming reddish glow of the scene. By now, I have become more fascinated by nuances and textures, and the human factor. Hence, most of the shots today are portraits. Cranberries are nothing without the men who harvest them. It’s not such a difficult endeavour, it would seem, but rather a matter of patience.

"A huge field like this, one of the men tells me, could be harvested in a 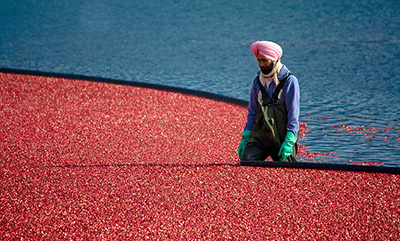 single day if we have enough labour. That’s about 9 truck loads. Right now we only have 2 trucks, so it will take a couple of days." The flooded field he’s waving at proudly is larger than a football field. The men are happy to pose for the pictures; the poor boogers probably figure they will end up on some newspaper cover. I’m glad I don’t have to explain. Corio-what?

After watching the harvest for the third time, I still find myself drifting into a fantasy world. The red parterre reminds me of a bubble-gum ocean through which grown-ups would plow endlessly, oblivious to the magic, busy, resigned. How relevant a comparison to life in general…

Here’s a sneak peak at the full gallery, 30 pictures in all, to be featured on the new web site.