Not all runs are pretty or epic. This one was an experimental breach of protocol in search of virgin grounds and unsettling sights.

It took me from home in Harlem towards the East River, where I crossed the Robert F. Kennedy Bridge onto strange Randall’s Island. There I ran in a circle, my path mimicking life. This was quite a while back when cramps were still a daily plague – I’ll write about that soon. I winced and stopped and stretched a lot. There was no momentum to be found, no peace in my surroundings, no logic to the route. Running next to a sewage treatment plant is about as depressing as diving on a reef defaced by coral bleaching. 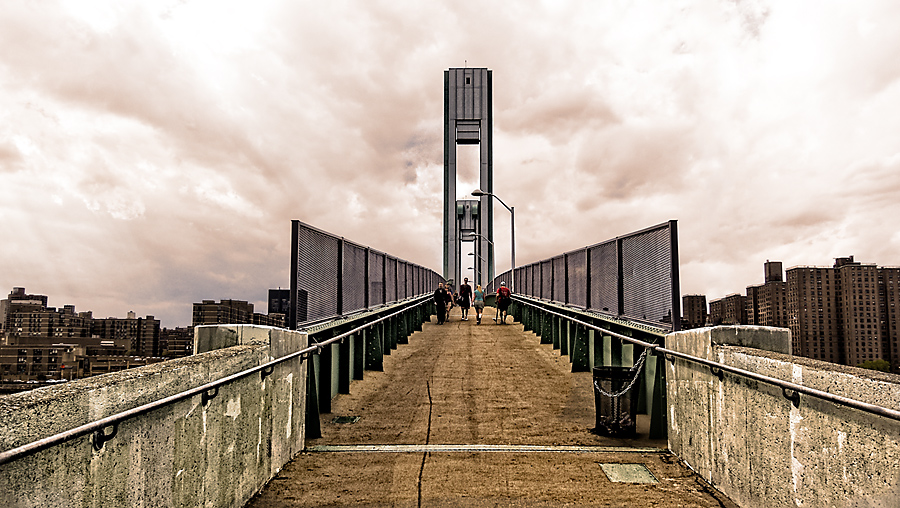 It reminded me of a run I did many years ago in downtown Panama City along the waterfront. The smell was horrible. Homeless people were emptying their bowels on the rocks. Huge freighters and tankers were waiting offshore to cross the Canal, doing the same to their bilges. The sea was oily and stank of pollution. I gagged and finished the run a few blocks inland.

So from Randall’s Island sci-fi looking urban desolation, I ran back to Manhattan across a slick pedestrian bridge, crawled northbound along the FDR past the eerie mega-complex that houses Costco, eventually cut through dirty streets with numbers for names, and headed for home, feeling tired and blue. The pictures might have a copper feel to them. It’s revenge.